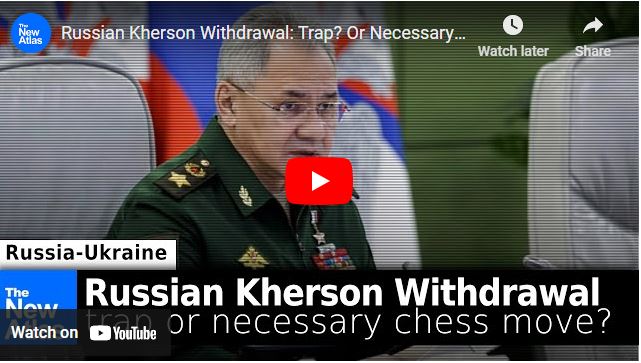 Russia’s Ministry of Defense has announced the withdrawal of Russian forces from Kherson city to the east bank of the Dnieper River.

This was alluded to 3 weeks ago by General Sergey Surovikin and for the purpose of weathering Ukraine’s all-or-nothing offensive while preserving Russian manpower and equipment.

While Russian forces have successfully defended the city until now, even the slightest possibility of Ukrainian forces overwhelming Russian troops on the wrong side of the river would result in a defeat of historic proportions. Russia has now eliminated that possibility.

Ukraine fights for today’s headlines, Russia is fighting to win the long war.

A race against time: Will Putin win, or will Europeans rise against inflation first?

The Ever Widening War Grows Wider

Ukrainian Power Outages, the US 101st Airborne, and Russia’s Next Big Move