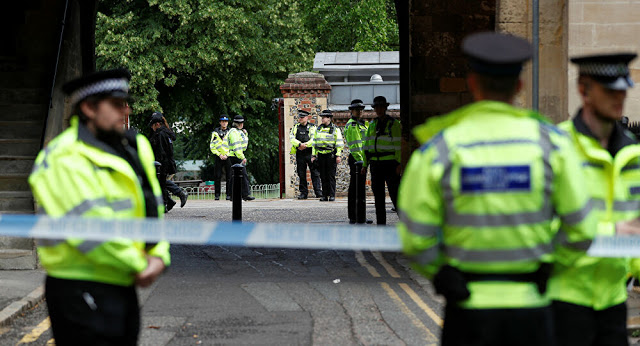 It should surprise no one paying attention that the suspect in the recent stabbing spree in Reading, UK was not only known to British security agencies as an extremist and security threat, but that he comes from the pool of extremists the British aided Washington in funding, arming, training, and providing air support for during the 2011 overthrow of the Libyan government and have harbored before and ever since.

The London Guardian in its article, “Libyan held over Reading multiple stabbing ‘known to security services’,” would admit:

The suspect in an alleged terror attack that left a teacher and two others dead was known to security services and other authorities, it emerged on Sunday.

Khairi Saadallah, the 25-year-old Libyan refugee held over the stabbings in a Reading park, was on the radar of MI5 in the middle of last year, sources told the Guardian.

Saadallah joins a long and growing list of extremists – and in the UK’s case, Libyans specifically – who have carried out attacks in the UK after receiving political and material support from Western governments in proxy wars waged across the globe.

The 2017 Manchester Arena bombing killing 23 and injuring over 800 was also carried out by Libyans Salman and Hashem Abedi, also extremists long known to British security agencies.

The London Guardian in its article on the Manchester bombing titled, “Salman Abedi: from hot-headed party lover to suicide bomber,” would report:

Quite when Abedi’s aggressive tendencies acquired an ideological bent is difficult to establish, but it has emerged that he travelled to Libya as a 16-year-old in 2011 to join the Libyan Islamic Fighting Group (LIFG) and fight alongside his father in the battle to oust Gaddafi.

His father was a prominent member of the militia, which was banned in the UK because of its jihadi links.

Despite terrorists from LIFG still carrying out terrorism to this day the US and UK have both removed the group from their lists of terrorist organizations.

The Western media admits that LIFG was involved in fighting and toppling the Libyan government in 2011 and admits they provided weapons to fighters in Libya as well as granted them asylum after Libya collapsed into disarray in the wake of US-led regime change.

US Senators would even shower awards and support on senior LIFG leaders after the fall of the Libyan government – including Abdelhakim Belhaj who served as “emir” of LIFG and who would at one point lead what was left of Libya after 2011. 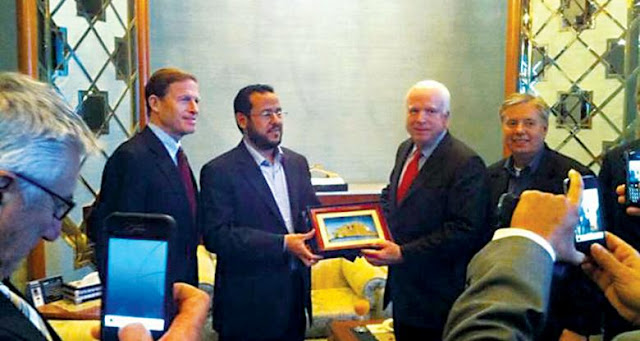 Western newspapers regularly admit that Western security services are fully aware of LIFG members living within the borders of their respective nations – having deliberately provided them asylum there.

It takes little imagination to predict tragedies resulting from the West’s policy of creating extremists, deploying them in proxy wars abroad, and then placing them amongst their own populations at home.

It was predicted long before the first US and British bombs dropped on Libya that their war of aggression against the North African nation would spread terrorism across the Middle East and North African region (MENA) as well as flood Europe with both refugees fleeing the catastrophe and extremists deliberately created by Western interventionism.

It is so predictable – in fact – that incidents like the Manchester Arena bombing or the Reading stabbings in Reading should be interpreted as deliberate by the British government – who like its American counterparts – readily uses extremists as armed proxies abroad and as an omnipresent threat at home justifying a growing police state while dividing and distracting the public.

Narrative management in the UK seeks to turn the stabbings into an issue surrounding race, religion, and social conditions when in reality the murders are a direct and deliberate product of the UK’s foreign policy and those responsible reside in London, Washington, and Brussels, not in mosques or in the pages of the Qu’ran.

To call it “blowback” is not accurate since blowback implies the consequences were somehow unpredictable or undesirable. It is inconceivable that the British government believes harboring thousands of terrorists within its borders will not result in terrorism.

It harbors these terrorists in order to cultivate and deploy them in future proxy wars and in the meantime prevents them from being liquidated abroad when targets of Western aggression get the upperhand.

To solve the problem of extremism the Western public must focus on the deliberate foreign policy creating it – not on the social, religious, and racial excuses used to cover it up and to distract away from it.