HOME / Multimedia / LIVE: Where is the world heading? | Talk It Out 2022 Geopolitics Recap 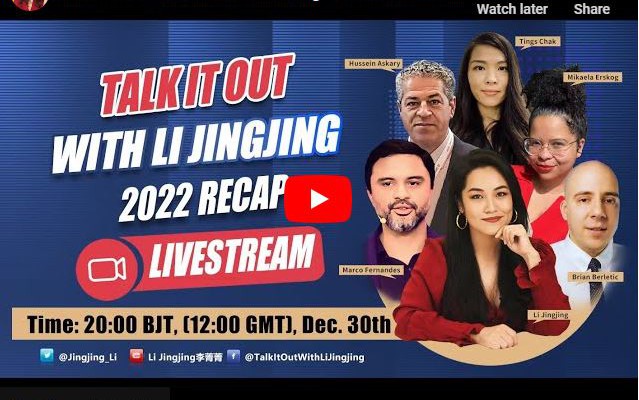 In this Special Episode of Talk It Out with Li Jingjing year-end Livestream, we invited guests from different continents to share their perspectives on this changing world.

From Asia and Africa to Latin America, we are seeing an unprecedented shift toward pursuing multipolarity. What are the major geopolitical changes of 2022 and where is the world heading in 2023?

Brian Berletic, a geopolitical analyst based in Thailand and former US Marine, shares how the US may further escalate tensions in the Asia Pacific region, particularly around Taiwan Island.

Tings Chak, a researcher with the Tricontinental: Institute for Social Research and Dongsheng News, shares her journey fighting against the West’s anti-China propaganda as a Chinese diaspora.

Mikaela Erskog, a South Africa-based researcher, host of The Crane: An Afric-China Podcast, discusses the pressing issues affecting the African continent and its position as the world’s balance shifts.

Marco Fernandez, a Brazilian researcher with the Tricontinental: Institute for Social Research, discusses the major political changes in Latin America and the Caribbean, and where the future lies after Lula becomes Brazil’s next president.

Questions for the Year Ahead

0 thoughts on “LIVE: Where is the world heading? | Talk It Out 2022 Geopolitics Recap”