HOME / Economy / Europe Has no Freedom But to Choose “Freedom Gas” 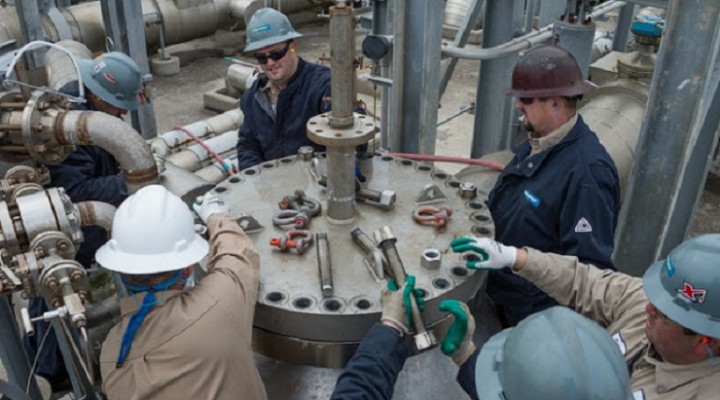 The US Department of Energy (DOE) recently renamed US liquefied natural gas (LNG) exports “freedom gas.” But freedom for who? For Europe who already has a cheap and reliable source of natural gas, but is being forced to switch over to more expensive US gas under the threat of sanctions? Certainly not.

Or freedom for Russia who supplies Europe with much of its natural gas to compete openly and fairly with the United States? Most definitely not.

Or is it freedom from competition for the US?  Yes, indeed.

It is often contradictory branding that heralds various chapters of US injustice at home (under the draconian “Patriot Act” for example) and abroad, such as during the illegal invasion and occupation of Iraq carried out under the dubious name of “Operation Iraqi Freedom.”

So discredited have US campaigns christened in the name of “freedom” become, that few scarcely believed the US was actually, seriously calling its natural gas exports “freedom gas.” However, it is not a headline torn from the pages of the satirical newspaper “The Onion,” but rather from the US DOE itself.

“Increasing export capacity from the Freeport LNG project is critical to spreading freedom gas throughout the world by giving America’s allies a diverse and affordable source of clean energy. Further, more exports of U.S. LNG to the world means more U.S. jobs and more domestic economic growth and cleaner air here at home and around the globe,” said U.S. Under Secretary of Energy Mark W. Menezes, who highlighted the approval at the Clean Energy Ministerial in Vancouver, Canada. “There’s no doubt today’s announcement furthers this Administration’s commitment to promoting energy security and diversity worldwide.”

Aside from the almost comical reference to “freedom gas,” there is something else revealing about the DOE’s claims of  “giving America’s allies a diverse and affordable source of clean energy.”

This is in direct reference to Europe, and Europe’s current imports of Russian gas. Russian gas, delivered by pipelines to Europe will always be cheaper than US liquefied natural gas transported by sea to Europe. That is, unless the US, through the threat of sanctions not only against Russia, but against Washington’s own allies in Europe, can raise those costs to above the price of US exports.

Articles like Foreign Policy’s “U.S. Senate Threatens Sanctions Over Russian Pipeline,” make it clear just how far along the US is toward doing just that.

In the latest uptick of trans-Atlantic tensions, European ships involved in the construction of a controversial gas pipeline from Russia to Germany could be subject to U.S. sanctions under a new bipartisan bill that will be introduced in the U.S. Senate as early as Monday.

The Trump administration has rebuked Germany for moving forward with the project, one of a raft of recent issues straining trans-Atlantic relations alongside Iran, climate change, and trade. Last July, U.S. President Donald Trump accused Berlin of being held “captive” to Russia due to its dependence on Moscow for energy, a charge German officials sharply dismissed.

Thus, Germany is not only being “rebuked” for making its own decisions regarding German economic and foreign policy, it is being threatened with US sanctions for not complying to US dictates. Calling LNG the US would seek to force nations like Germany to buy against their will “freedom gas” is an intentional insult added to economic injury Washington already seeks to inflict.

“Freedom Gas” a Smokescreen for Dictatorship

Late last year, the US House of Representatives passed resolution 1035 – “Expressing opposition to the completion of Nord Stream II”

By passing this resolution, the United States presumed to dictate to all of Europe who they could and couldn’t do business with. And while the resolution was non-binding, it alluded to sanctions now already being put in motion.
It was clear that the resolution’s language regarding “European energy security through diversification of supplies” simply meant Washington would seek to force Europe to buy US gas over Russian gas.The very idea of Washington passing resolutions focused on “European energy security” in the first place is a full frontal assault on European sovereignty and “freedom.” Now that the resolution’s intentions are being transformed into policy – including sanctions targeting European companies – it has become an economic attack on Europe as well.

Worse still is the fact that to make US gas exports competitive, the US must resort to more than just sanctions. It must also commit to multiple conflicts hindering the delivery of Russian gas – such as in Ukraine where for 5 years now armed conflict has raged, threatening pipelines delivering Russian gas to Europe.

The US portrays Russia as a threat to European security and stability – despite the fact that Europe itself has voluntarily and jointly developed the infrastructure to bring Russian gas into Europe and jointly benefits from these imports. The US thus finds itself pushing childish gimmicks like “freedom gas” as a smokescreen for the fact that Washington – not Moscow – poses the greatest threat to European security, stability, and even prosperity.

Washington’s methods of targeting Russian hydrocarbons, or Chinese telecom technology, has revealed the US as an unreliable ally, an unreliable business partner, and lacking the means to compete in a free and fair global market. Its tactics of coercion over competition – if successful – will leave the world with inferior alternatives forced onto nations at extorted prices. The world faces a choice between “freedom gas” and actual freedom to decide what it buys and from whom it buys it from – one of the most basic freedoms of all and a freedom Washington seeks to deny the world.