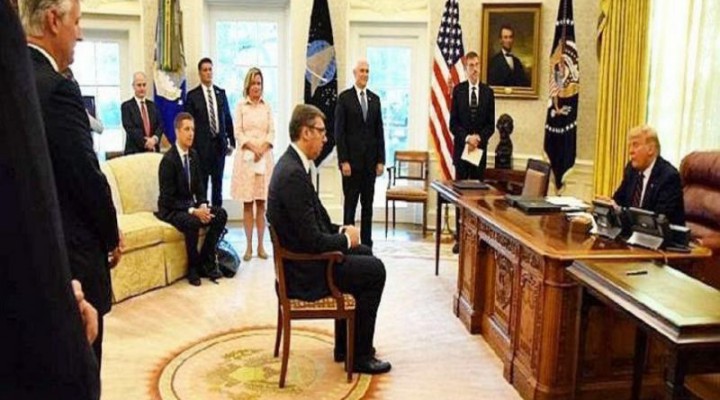 Serbian President Vucic just discredited his own over-hyped “balancing” act between Russia and the West over the weekend after he de-facto recognized the NATO-occupied Province of Kosovo & Metohija under the cover of “economic normalization” and then committed to moving his country’s embassy in “Israel” to Jerusalem, both of which are extremely pro-US policies that exposed his “balancing” act as the empty slogan that it’s always been.

A lot has been written by many Alt-Media commentators in the past about Serbia’s so-called “balancing” act between Russia and the West under the leadership of President Vucic, which supposedly makes the best of the very difficult situation that Belgrade has found itself in since the turn of the century. The gist is that Serbia will maintain equally strategic relations between both of them, refusing to take a side in their growing rivalry since doing so would either ruin its economy if the West imposes sanctions against it in response to too Russian-friendly of a foreign policy while its Russophile population would seethe with potentially uncontrollable rage if Serbia followed the West’s lead in promulgating policies intended to provoke Moscow. There’s admittedly some truth to that interpretation since the landlocked country is mostly surrounded by NATO members nowadays and has no significant non-energy economic cooperation with Russia, though its people still sincerely love Russia for historical and cultural reasons, to say nothing of the positive example that it set in international affairs by occasionally standing up to the West in very dramatic ways (Abkhazia/South Ossetia, Crimea, Syria, etc.). Nevertheless, after what happened this weekend in Washington, it’s no longer possible to seriously talk about Serbia’s “balancing” act in any meaningful sense of the word.

Vucic de-facto recognized the NATO-occupied Province of Kosovo & Metohija under the cover of “economic normalization” and then committed to moving his country’s embassy in “Israel” to Jerusalem, both of which are extremely pro-US policies that exposed his “balancing” act as the empty slogan that it’s always been. For the earlier mentioned geopolitical and economic reasons related to NATO encirclement and an economy that’s much more closely connected to the EU than to Russia, the West exercises significant influence over Serbia, especially its current leadership which aspires to join the EU. This doesn’t mean that it was inevitable that the country would undertake these drastic foreign policy decisions since a more “moderate” (as in, less Europhile and more genuinely “balanced”) government could have simply maintained the status quo in both respects, but Vucic wants his defining legacy to be the so-called “peaceful political resolution” of Kosovo’s unilateral NATO-backed secession and Serbia’s eventual entrance into the EU. The former, he believes, will directly lead to the latter considering the bloc’s prerequisite for membership, which is of course a debatable outcome since there’s no guarantee that selling out the cradle of his civilization will lead to any tangible benefits. Still, that doesn’t explain why he wants to move Serbia’s Embassy in “Israel” to Jerusalem.

That dimension of this weekend’s dual decisions must be seen from the perspective of Vucic’s insincere belief in “balancing”. Once again, Serbia’s foreign policy options are limited, but that doesn’t predestine it to subserviate itself to the US at the expense of its dignity. If Vucic truly believed in “balancing” like he’s worked very hard in trying to convince his people is the case (albeit in vain), then he wouldn’t have unnecessarily done such a thing just for the purpose of giving Trump something that he can spin as a foreign policy victory ahead of this November’s elections. Unlike Serbia’s “economic normalization” with Kosovo which promises to be profitable for those who cash in on it, no such tangible benefit is expected for moving the Serbian Embassy to Jerusalem. That move was solely done as a sign of fealty to Trump, who still rules the West’s most powerful country, and should therefore be seen as the voluntary discrediting of Vucic’s over-hyped “balancing” act. With that single move, he’s starting to come clean with what his intentions have always been this entire time, namely that he’s a pro-Western politician who unconvincingly tried to disguise his geopolitical pivot with the empty slogan of “balancing” in order to assuage the concerns of his Russophile electorate. That’s not to say that Serbs are “anti-Western” in the cartoonish way that this term is oftentimes depicted, but just that they’re extremely sensitive to sacrificing their sovereignty to the West after the 1999 NATO War on Yugoslavia.

One-Party Rule Has Its Perks

The confidence with which Vucic pulled off his “balancing” mask and showed his true face by de-facto recognizing Kosovo at the same time as deciding to move the Serbian Embassy in “Israel” to Jerusalem is entirely the result of his country practically becoming a one-party state after this summer’s parliamentary elections. He can point to that as his so-called “mandate” for “making tough decisions” in the “national interest”, even though no such decisions had to be made in the first place. There’s no longer any real reason for him to continue talking about “balancing” since that rhetoric is impossible to believe after he proverbially kissed Trump’s ring over the weekend, especially with respect to his embassy decision. His “perception managers” (surrogates in the Mainstream and Alternative Media) might not even try to hide it anymore either because of how counterproductive it would be to so openly lie to the people that Vucic is anything other than a vehemently pro-Western politician. That doesn’t, however, mean that he’s “anti-Russian” though since Serbia still receives important arms and energy supplies from the Eurasian Great Power, which isn’t expected to change despite him coming clean with his geopolitical intentions. It might disappoint some Serbian Russophiles that Moscow will still embrace him, but if they feel that way, then they don’t really understand Russia.

The Reality Of Russia’s Regional Strategy In The Balkans

It’s “politically incorrect” for most Russian-friendly folks anywhere in the world to openly acknowledge, but Russia isn’t “anti-Western” in the sense that they’ve imagined it to be. It’s true that the country has dramatically stood up to the West on several occasions (Abkhazia/South Ossetia, Crimea, Syria) and explicitly supports the emerging Multipolar World Order, but it’s also extremely pragmatic, so much so that the author has previously argued that Moscow actually supports Vucic’s position on Kosovo and not just because he’s the internationally recognized head of state who they regard (whether rightly or wrongly) as “responsible” for “resolving” that issue. Simply put, Russia has its own geopolitical interests in that outcome which clash with what its supporters generally expect of it due to the country’s rhetoric on that topic. The author explained this at length in a series of articles that the reader should at least skim through if they have the time in order to obtain a deeper understanding of the complex strategic calculations at play:

* 12 July 2019: “Korybko To Italian Academia: The Balkans Are Being Geopolitically Re-Engineered”

Long story short, Russia recognizes the very real limits to its influence in the Balkans, hence why it’s “passively facilitating” the West’s geopolitical plans there (in pursuit of its hope that doing so would advance its dreams of a “New Detente”) by providing Vucic with the “balancing” cover that he needs in order to sell these outcomes to his people. Russia was never fooled by Vucic’s “balancing” act but went along with it since he’s protected Russia’s business interests in that centrally positioned Balkan country. In fact, Moscow might even regard him as the “model” European politician since he’s unquestionably pro-Western yet still pragmatically retains certain economic ties with Russia, particularly some of its biggest state-connected businesses involved in the arms and energy industries. As much as it may pain Serbian Russophiles to read what the author is about to write, Russia probably wishes that there were more leaders like Vucic in Europe who don’t let their pro-Western ideological zeal get in the way of their business interests with Russia like Montenegro’s Djukanovic did.

Vucic has never really “balanced” between the West and Russia since he was always moving towards the former while disguising his true intentions with friendly rhetoric towards the latter. Moscow went along with this charade by providing the necessary soft power support for his ruse in order for there to be at least one Europhile in Central & Eastern Europe who nevertheless understands the pragmatic importance of maintaining business ties with Russia. They seem to hope that he’ll serve as an example for other leaders to follow seeing as how he’s proven that it’s indeed possible to move closer to the West without ruining relations with Russia like Montenegro’s Djukanovic did. To be clear, however, this isn’t “balancing” since the Western vector of Serbia’s foreign policy under Vucic’s leadership is decisively pro-Western and isn’t counterbalanced in any meaningful way by his country’s cooperation with some of Russia’s biggest businesses. After all, not only did he de-facto recognize Kosovo over the weekend via the cover of “economic normalization”, but he even went as far as proverbially kissing Trump’s ring by committing to move the Serbian Embassy in “Israel” to Jerusalem. Vucic basically discredited his own over-hyped “balancing” act, but he did so since it no longer serves its purpose after he recently established one-party rule and thus sees no need to keep playing rhetorical games.