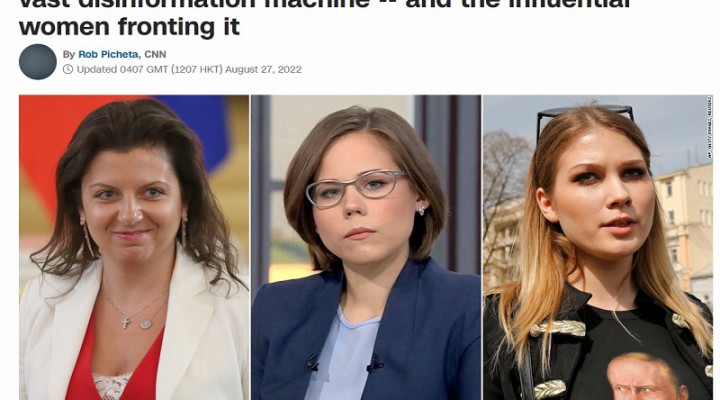 Far from being forgotten, Darya will go down in history as a Russian hero, especially after President Putin posthumously awarded her the Order of Courage. It’s precisely because of her de facto canonization as one of the emerging Multipolar World Order’s secular saints that CNN decided to defame her as a “disinformation” agent in order to discredit her indisputably influential legacy.

The assassination of journalist Darya Dugina by a Ukrainian terrorist in late August proved that the US’ information warfare campaign against Russia has dangerous consequences for its innocent targets. That declining unipolar hegemon and its Western vassals (which in this context also includes the fascist puppet regime in Kiev) are dedicated to literally destroying the lives of those who speak out against them, first through fake news and then through targeted killings that are subsequently justified on that false basis exactly as Kiev’s Ambassador to the Vatican recently sought to justify Darya’s. A special hatred is reserved for people who share different paradigms for interpreting the ongoing global systemic transition since it’s those who stand the greatest chance of waking up the Western masses.

Darya was among those who passionately spread her multipolar worldview to whoever had the interest in listening. She was a rising political star her homeland upon the time that her life was abruptly ended by that dastardly terrorist attack, but her killing only served to raise global awareness of the causes that were so dear to her and can therefore be described as extremely counterproductive in hindsight. Far from being forgotten, Darya will go down in history as a Russian hero, especially after President Putin posthumously awarded her the Order of Courage. It’s precisely because of her de facto canonization as one of the emerging Multipolar World Order’s secular saints that CNN decided to defame her as a “disinformation” agent in order to discredit her indisputably influential legacy.

Rob Picheta, who describes himself as a journalist for CNN Digital in London, published a hateful screed on the front page of their site about how “Darya Dugina’s death provides a glimpse into Russia’s vast disinformation machine — and the influential women fronting it”. The purpose behind his piece was to mislead his targeted Western audience into thinking that she was nothing more than a propagandist whose sole role in life was to spew easily discredited “disinformation”. To that end, he quoted a Ukrainian-based member of the Atlantic Council – which is financed by Western governments and was thus designated by Russia as a foreign agent – as well as the similarly US Government-financed Russian “expert” Kamil Galeev who’s infamous for sharing a treasonous and pro-terrorist thread on Twitter.

The simple points being pushed in his piece are that Darya was supposedly one of her country’s rising disinformation agents, had allegedly meddled in the French elections, and that other women like her are nothing but puppets. It’s very heavily implied upon reading between the lines that her assassination therefore wasn’t entirely all that bad since Picheta misrepresented her as a legitimate target due to her active role in articulating a particular version of multipolarity, which he smeared as “imperialist”. In other words, he misogynistically removed all agency from Darya and the other Russian women who he disagrees with to independently arrive at their own political opinions, objectified them as being part of some global conspiracy coming from the Kremlin, and thus implied that it’s alright if they’re killed.

“What’s Dishonestly Smeared As ‘Russian Propaganda’ Is Just The Multipolar Worldview”, however, though those like Picheta who are committed to reversing the US’ declining unipolar hegemony can’t countenance that it’s possible for people to simply have a contrarian opinion. This is entirely due to their belief in the discredited supremacist view of Western Civilization as “exceptional”, which correspondingly also implies that its models will “inevitably” spread across the world since they’re supposedly the best and most effective ones that could ever be conceived by humanity. Those like Darya and the vast majority of humanity across the Global South who disagree with this hateful innuendo that Caucasians are superior in all respects are branded as “conspiracy theorists” and “enemies”.

This observation confirms that Darya and the billions of others like her actually play polar opposite roles than those that were maliciously ascribed to them. She and the vast majority of humanity aren’t “conspiracy theorists” who Picheta implied are legitimate targets of terrorist attacks on the supposed basis that their contrarian views are “dangerous” and “imperialist”. In reality, it’s he and his peers who participate in the US-led Western Mainstream Media’s (MSM) objectively existing disinformation ecosystem that are the bonafide conspiracy theorists whose work is genuinely dangerous and imperialist since it aims to put a target on the back of every one of their political opponents. That said, neither Picheta nor his colleagues deserve to die like he so disgustingly implied about Darya and hers.

The very fact that CNN would publish Picheta’s hateful and misogynist piece, not to mention on the front page of its website, shows how desperate the MSM has become to discredit Darya and her multipolar legacy. Kiev’s assassination of this rising Russian visionary turned her into an eternal martyr of the emerging world order that’s systematically dismantling the US’ declining unipolar hegemony. More people across the world are aware of her insightful work than ever before, including Westerners whose minds will be liberated from the MSM’s propaganda upon reading more about the views of this famous Russian journalist. It’s precisely this outcome that scares the US the most, yet all efforts to defame Darya like CNN’s latest high-profile one will only further solidify her multipolar legacy.

Blockbuster: Who Killed Daria Dugina? (It Was ‘the Jews’)