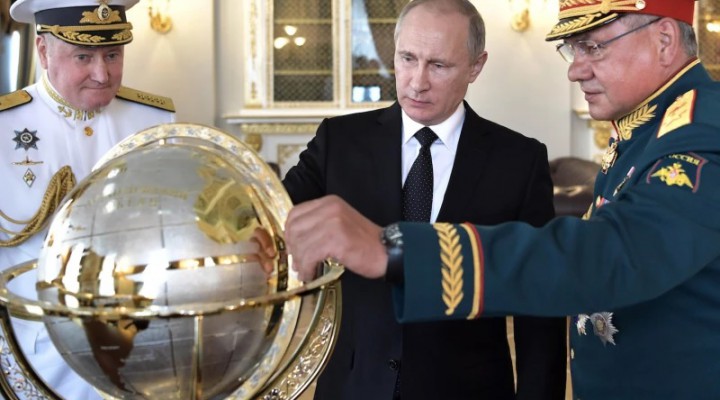 This grand strategy envisions Russia becoming an independent pole of influence in the emerging Multipolar World Order, to which end Moscow must pragmatically balance between its two equally important Chinese and Indian Great Power partners. Countries like Pakistan, Israel, Turkey, and the several others that he named will remain important for Russia’s grand strategy but will never approach the role that those two have.

RT published a very insightful piece on Monday titled “Dmitry Trenin: How Russia must reinvent itself to defeat the West’s ‘hybrid war’”. The author is a key policy influencer from the Council on Foreign and Defense Policy. The official Duma website writes that “The organization’s mission is to help develop and implement strategic concepts for Russia’s development, its foreign and defense policy, the formation of the Russian state and civil society in the country.” It’s therefore very important for observers to pay attention to Trenin’s article if they aspire to better understand the future of Russian grand strategy.

Most of his piece describes the state of affairs in the US-led West’s Hybrid War on Russia that it’s been waging since Moscow’s ongoing special military operation in Ukraine. It’s worthwhile reading for those who haven’t yet grasped these dynamics and the direction that they’re headed but will be skimmed over in the present piece in order to focus on the policy recommendations that he shared. That, after all, is the bread and butter of his article and what’s most interesting for observers. Pretty much, everything that he suggests involves defending against the West and embracing the Global South.

The first proposal sets the framework for the rest that follow and concerns the establishment of Russia as an independent pole of influence in the global systemic transition to multipolarity. This vision is upheld by focusing on the domestic front, particularly through the creation of an “effective integrated strategy – general political, military, economic, technological, informational and so on.” Trenin then states that Russia must absolutely accomplish its strategic objectives in Ukraine because “The solution to most of the country’s other strategic objectives now depends directly on whether [that happens].”

The next proposal is extremely pragmatic and it’s that “The most important of these broader foreign policy tasks is not the overthrow of the US-centric world order by any means and at any price (its erosion is due to independent factors, but a Russian success in Ukraine would be a painful blow to US global hegemony) and of course, not a return to the fold of this set-up on more favorable terms, but the consistent building of a new system of international relations together with non-Western countries, and the formation, in cooperation with them, of a new world order and its consequent promotion.”

He then details exactly how this can be done: “A long-term priority here is the further development of allied relations and integration ties with Belarus. This category also includes strengthening Russia’s security in Central Asia and the South Caucasus. In the context of rebuilding foreign economic relations and creating a new model of the global order, the most important directions are cooperation with world powers – China and India as well as Brazil – and with leading regional players – Turkey, ASEAN countries, the Gulf states, Iran, Egypt, Algeria, Israel, South Africa, Pakistan, Argentina, Mexico and others.”

Multilateral interaction between multipolar groups like BRICS, RIC, the SCO, and others comprises the next layer of Trenin’s vision for Russian grand strategy. This, he writes, should be done concurrently with containing conventional and hybrid threats from the US-led West in the nuclear, cyber, and other domains. Trenin then suggests that “Moscow needs to assess carefully the reasonableness, possibilities and limits of situational cooperation with various political and social groups in the West, as well as with other temporary potential allies outside the bloc whose interests coincide in some respects”.

“The task”, he writes, “is not to inflict damage on the enemy anywhere, but to use various irritants to divert the opponent’s attention and resources from the Russian focus, as well as to influence the domestic political situation in the US and EU in a direction favorable to Moscow.” This open call for foreign meddling might shock some Russian-friendly observers but such operations occur all the time even if they’re not formally acknowledged by those carrying them out. All that Trenin is doing is proposing to fight fire with fire in response to the West doing this against Russia for years.

Having described the contours of what he hopes will eventually become Russia’s grand strategy, this influential expert then shares some details about what he described as its “most important objective”, which is managing affairs within the Russia-US-China triangle. He lauds the Russian-Chinese Strategic Partnership but laments that “Chinese companies and banks are deeply integrated into the global economy and are wary of US and EU sanctions, thus limiting the possibility of interaction.” This observation suggests that China hasn’t become the valve from Western pressure that some expected.

Despite the US’ attempted simultaneous “containment” of Russia and China bringing those two multipolar Great Powers closer, Trenin clarifies that “Under a ‘hybrid war,’ political and diplomatic support from China, and even limited economic and technological cooperation with it, are very important for Russia. Moscow does not currently have the opportunity to force even closer rapprochement with Beijing, but there is no necessity in too close an alliance.” In other words, Russia might have expected more support from China but obviously isn’t going to beg for it.

In the event that the American and Chinese superpowers kinetically clash, Trenin advises that “Russia should be ready to support Beijing politically, as well as provide on a limited scale and under certain conditions, military-technical assistance to it, while avoiding direct participation in the conflict with Washington.” Nevertheless, he cautions that “Opening a ‘second front’ in Asia is unlikely to significantly ease the pressure of the West on Russia, but it will dramatically increase tension in relations between Russia and India.”

With the deepest of respect for his insight, position, and credentials, his prediction about Russian-Indian ties in that scenario is unlikely to pan out. That’s because India decisively intervened to become Russia’s irreplaceable valve from Western pressure, arguably much more so than China, in order to preemptively avert its partner’s potentially disproportionate future dependence on the People’s Republic. This game-changing development is aimed at jointly creating a third pole of influence in the present bi-multipolar intermediary phase of the global systemic transition and explained in detail here, here, here, and here.

Moving along after having clarified that crucial point of disagreement, Trenin then suggests that “It is also important to determine the permissible limits of Russia’s financial, economic and technological dependence on neutral countries (primarily China), and launch a technological partnership with India.” This shows that he also acknowledges that South Asian state’s role as Russia’s irreplaceable valve from Western pressure despite his contentious prediction that his country’s proposed support to China in any kinetic conflict with the US would “dramatically increase tensions” between Moscow and Delhi.

It’s this Indian dimension of Russian grand strategy that stands as perhaps the most surprising outcome of recent events with respect to the global systemic transition. It’s one thing for an observer to touch upon this and another entirely for someone of Trenin’s influence on Russian policymaking to very strongly imply that a technological partnership with India can limit their country’s “dependence on…China”. This extends credence to the four observations hyperlinked at the end of the second most recent paragraph above, all of which should be read in full by anyone who’s interested in learning more.

Reflecting on the proposals that Trenin made in his latest analysis that RT notes at the end “was prepared based on the author’s speech at the 30th Assembly of the Council for Foreign and Defense Policy and originally published in Russian on globalaffairs.ru” (the last-mentioned being his Council’s official journal), it’s clear that Russia will concurrently prioritize far-reaching domestic reforms (the details of which were skimmed over in the present piece in order to focus on its foreign policy aspect) together with defending itself from the West and embracing the Global South.

This grand strategy envisions Russia becoming an independent pole of influence in the emerging Multipolar World Order, to which end Moscow must pragmatically balance between its two equally important Chinese and Indian Great Power partners. Countries like Pakistan, Israel, Turkey, and the several others that he named will remain important for Russia’s grand strategy but will never approach the role that those two have. It’s the interplay of Russia’s relations with China and India, both bilaterally and through RIC, that will define this civilization-state’s role in the global systemic transition.