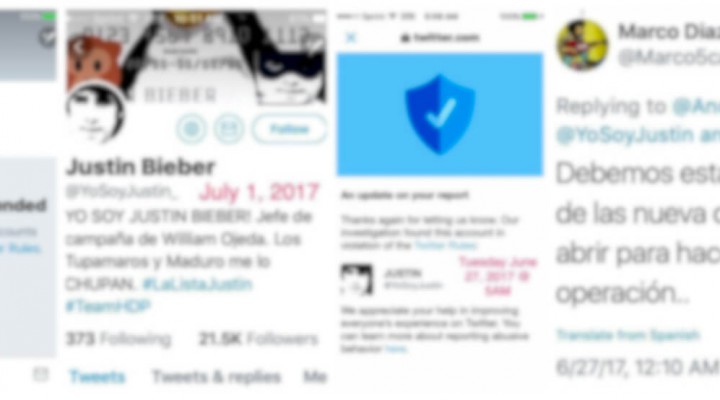 Shady anonymous actors are waging an information war manipulating social media with automated posts in an apparent attempt to manufacture a faux consensus for regime change in Venezuela.

As the U.S.-backed coup attempt in Venezuela continues to take shape, shady anonymous actors are waging an information war manipulating social media with automated posts in an apparent attempt to manufacture a faux consensus for regime change in the online theater.

If you’ve been on Twitter since January 23, you could be forgiven for thinking that the only pastimes in Venezuela are protesting and replying to anyone and everyone on the platform critical of Washington’s clear collusion with the Venezuelan opposition in its quest for regime change.

While the phenomenon has not yet been linked to manipulation by the opposition, it raises questions about the online influencers who have tried to turn the previously little-known figure into a household name the world over.

Meanwhile, Twitter disinformation researcher and data visualization artist Erin Gallagher uncovered an immense campaign sympathetic to the right-wing Venezuelan opposition that used a variety of tools and applications to artificially inflate the reach of certain posts.

“The Venezuelan opposition is far from censored on Twitter,” she wrote. “To the contrary, their trends generate billions of impressions every day.”

Gallagher’s bombshell report was dropped on Thursday. The following day, Twitter took action — but not against the pro-opposition network. The company banned “764 accounts located in Venezuela” that it said used “spammy” political content “similar to that utilized by potential Russian [Internet Research Agency] accounts” and 1,200 accounts it said “appear” to be “engaged in a state-backed influence campaign targeting domestic [Venezuelan] audiences.” Those accounts have been characterized online as “pro-Maduro.”

The apparent double standard wasn’t confined just to Twitter, however. The Digital Forensic Research Lab (DFRL), often the mainstream media’s go-to institution of “experts” on such matters, claimed in a blog post that it “did not find clear evidence of automated amplification of hashtags trending around the protests” against Maduro on January 23 (#23E), the day of Maduro’s inauguration, Gallagher noted.

The DFRL post, entitled “Protests Go Viral in Venezuela,” primarily took aim at the government for allegedly censoring the web and perhaps gaming hashtags on Twitter.

DFRL is an arm of the neoconservative Atlantic Council think tank, which is funded by NATO, Gulf monarchies, and the arms industry. Twitter has previously worked closely with the DFRL in countering alleged state-backed disinformation campaigns.

Gallagher wrote that she was “shocked at the contrast between the way DFRLab portrayed Venezuelan social media versus what I’ve been monitoring for 1.5 years.”

In that time, Gallagher discovered a hashtag — #TeamHDP — that was “used by an anonymous group of right-wing political hackers who have attacked the Venezuelan government, leaked documents online,” and doxxed Chavistas. Another hashtag employed by the network was #LaListaJustin, (Justin’s List, which is named after a fake Justin Bieber account that was a primary pusher of #TeamHDP). The #LaListaJustin released hacked documents showing personally identifiable information (such as home addresses, etc.) of Maduro supporters, members of the military, police, and their spouses and families.

The revelation is particularly troubling because the Venezuelan opposition has used vigilantism to enact violent retribution on Chavistas and public officials.

Apparently spearheading the #TeamHDP hashtag is a Miami-based company called DolarToday, which is used by financial websites and media to report on black market exchange rates for Venezuela’s currency, the bolivar. Maduro has previously accused DolarToday of manipulating exchange rates and fueling an economic war against his country Between January 24 and January 28, DolarToday was a “central influencer of the #23E hashtag,” Gallagher wrote.

The company’s own Twitter account “averages” 349 tweets per day, but picks up steam around uprisings in Venezuela. Gallagher found more than 1,000 tweets per day around the attempted coup.

Beyond its own Twitter account, DolarToday’s tweets are reposted by a network of other accounts. One such artificially amplified message accused the late president Hugo Chavez of being a “perverted drug addict.”

DolarToday has two applications, SWAT Comunicacional and another named after itself. The apps allow users to log in and allow DolarToday to automatically repost the company’s tweets.

Gallagher wrote that she has “never seen anything with such a  tremendous reach” as the Venezuelan opposition #TeamHDP hashtag, which was associated with hacking and doxxing (which is against Twitter’s terms of service.)

The researcher concluded that “Venezuelan opposition social media networks are engaging in inauthentic coordinated activity on Twitter.” Such “coordinated inauthentic activity,” it should be noted, has been the primary explanation given by social-media giants such as Twitter and Facebook as their reason for purging tens of thousands of accounts, including those of independent reporters.

A double standard beta-tested in Syria

Twitter and the DFRL appear to be turning a blind eye to violations of Twitter policy from pro-opposition networks while taking aim at allegedly pro-government disinformation operations, while neither has provided evidence of such a campaign by the government.

In many ways, the war in Syria served as a testing ground for propaganda tools — from the U.S.-funded “civil defense” group White Helmets to U.S.-backed Kurdish fighters, who were portrayed as defenders of an anarchist commune in the north.

But Venezuela today exists in an even more precarious position online due to the advent of institutions and “experts” that have made a name for themselves in the frenzy that has followed allegations that Russia used coordinated inauthentic behavior to sway the 2016 presidential elections; even more so because social-media giants like Twitter and Facebook have acquiesced.

For example, back in July, Twitter and Facebook were unaware of any state actors manipulating social media besides Russia. Since then, they have levied such accusations against Iran, and now Venezuela.

With these institutions now revealing their allegiances to the U.S. regime-change machine, and the usual suspects (the Atlantic Council, for example) in full lockstep, it becomes incumbent on social-media users to ignore the “experts” and come to their own conclusions about the facts on the ground in Venezuela.