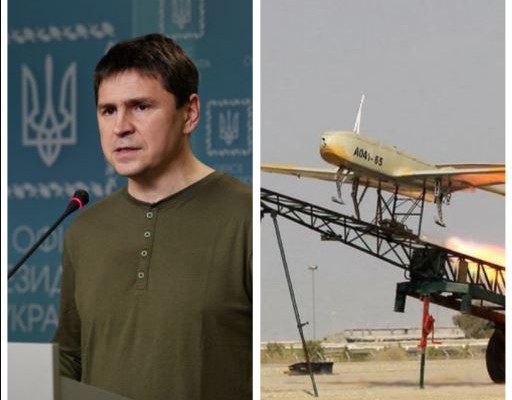 Mykhailo Podolyak, an advisor to Ukrainian President Volodymyr Zelensky, has called for attacks inside Iran as the country’s drones cause setbacks for the Ukrainian military.

Kiev adopted its hostile posture towards Tehran after claiming Russia deployed Iranian-supplied drones to strike Ukrainian civilian infrastructure throughout much of October.

In an interview with a Ukrainian news outlet on November 5, Podolyak argued that the response to Iran supplying Russia with drones should not be limited to sanctions or even a total trade embargo: “It seems to me that it should not be sanctions or even an embargo, yes a total embargo. It seems to me that it would be possible to carry out specific strikes on the production of drones, ballistic missiles, and so on.”

Iran’s government has responded to the allegations by Ukraine and its Western patrons by acknowledging that it supplied Russia’s military with drones prior to its military campaign in Ukraine. According to Tehran, Iran was willing to review evidence that its weapons were used to attack Ukrainian infrastructure targets. Russia, for its part, has officially denied using Iranian drones to attack Ukraine.

“We agreed with the foreign minister of Ukraine to provide us with any documents they have that Russia used Iranian drones in Ukraine,” Iranian Foreign Minister Hossein Amirabdollahian informed reporters gathered in Tehran earlier this November. But Amirabdhollahian said US and European interests ultimately pressured Ukrainian officials to reject direct engagement.

With dialogue blocked between the two countries over the contentious topic, Kiev is now resorting to threats against Iran.

Russia’s military carried out attacks against Ukraine’s electrical grid in response to the October 8 Ukrainian truck bombing of the Kerch Bridge that links southern Russia to the territory of Crimea. According to Zelensky, Russian strikes have wiped out as much as 40 percent of Ukraine’s energy system.

The presence of Iranian drones appears to be causing serious headaches for the Ukrainian military, as both Zelensky and his top advisor Mykhailo Podolyak have lashed out at Iran in recent statements.

Podolyak not only called for airstrikes on Iranian military sites, he regurgitated well-worn Western and Israeli regime change talking points about Iran being a destabilizing force, arguing that without strikes on targets in Iran, the country will continue to arm “terrorist groups like Hezbollah” and the “terrorist Russian Federation.”

Podolyak has been ranked the third most influential Ukrainian by the Kiev-based Focus Magazine.

“Of course, increasing pressure on the Iranian regime was discussed today with Mrs. Ursula von der Leyen. Its complicity in Russian terror must be punished,” Zelensky proclaimed in a speech published on his website. “And we will bring this issue not only to the level of our traditional partners. The whole world will know that the Iranian regime helps Russia prolong this war, and therefore prolong the effect of those threats to the world provoked precisely by the Russian war. If it was not for the Iranian supply of weapons to the aggressor, we would be closer to peace now.”

Iran is responsible for the murders of Ukrainians. Country that oppresses its own people is now giving ru-monsters weapons for mass murders in the heart of Europe. That is what unfinished business and concessions to totalitarianism mean. The case when sanctions are not enough…

“Absolutely everyone who helps Russia prolong this war must bear responsibility for the consequences of this war along with it,” Zelensky said, adding that “we understand” that Russia is preparing for more “mass attacks on our infrastructure” with “Iranian missiles.”

Though there is no record of any Iranian missile being used in an attack on Ukrainian infrastructure thus far, Zelensky declared, “We are preparing to respond.”

Just as Iranian-made drones appear to have given Russian forces a major boost on the battlefield, the US HIMARS artillery system has enabled significant Iranian gains, including the recapture of Kherson. However, no high ranking officials in Russian president Vladimir Putin’s office have similarly threatened the United States, or any of the other 40 countries that provided Ukraine with critical military assistance.

Iran sends 2400 kamikaze drones and IRGC instructors to destroy 🇺🇦 infrastructure. With that money Tehran develops its military industry. Shouldn't countries for whom Iran is an existential threat send their Air Defense to Ukraine? Until Iranian drones flew towards them.

This October 13, Podolyak fulminated against Israel for having not supplied Ukraine with advanced air defense systems, tweeting, “shouldn’t countries for whom Iran is an existential threat send their Air Defense to Ukraine?”

As The Grayzone reported this September, Zelensky has fantasized about transforming his country into a hyper-militarized “big Israel.” To that end, he and his top advisor have already begun threatening to expand their war to the frontiers of Iran.