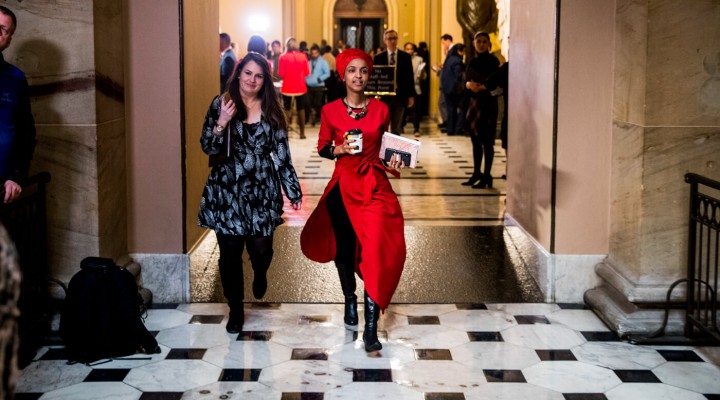 MPN- Omar is showing that she is onto the “humanitarian intervention” canard that has served as a pretext in the past decades to the destruction of large swaths of the Middle East and North Africa.

Freshman Representative Ilhan Omar (D-MN), is quickly building a reputation for herself as a staunch anti-war voice in the House of Representatives. While the government has been shut down for the majority of her term so far, Omar has used social media to push back on the coup in Venezuela, which has been heavily supported by the executive branch.

Omar was among the first Democrats to raise any objections to the U.S.-backed coup, in what was considered the most unequivocal denunciation of Washington’s attempt at regime change in Caracas.

Just one day after Venezuelan opposition figure Juan Guaidó declared himself president with the assurance the United States would support his presidency, Omar warned that “[U.S. President Donald] Trump’s efforts to install a far-right opposition will only incite violence and further destabilize the region.”

A US backed coup in Venezuela is not a solution to the dire issues they face. Trump’s efforts to install a far right opposition will only incite violence and further destabilize the region. We must support Mexico, Uruguay & the Vatican’s efforts to facilitate a peaceful dialogue.

24.5K people are talking about this

Despite being subjected to swift backlash by D.C. hawks and the humanitarian interventionist wing of her own party, Omar has continued to tweet about the situation in Venezuela.

In order to help Venezuelans, “we can lift the economic sanctions that are inflicting suffering on innocent families, making it harder for them to access food and medicines, and deepening the economic crisis,” Omar said. “We should support dialogue, not a coup!”

On Sunday, White House Acting Chief of Staff Mick Mulvaney refused to take military intervention in Venezuela off the table. Omar quickly denounced the posturing. “We must rule out military action in Venezuela,” she tweeted. And she asked:

We have to wonder, if Trump and Pompeo are so worried about human rights and democracy in Venezuela, Cuba, and Nicaragua, why do they actively support horrible regimes in Brazil, Guatemala, and Honduras?”

Omar nails U.S. track record in South America and around the world

Omar could not have hit the nail more squarely on the head. Last year, the United States supported a violent insurrection against the socialist Sandinista government of Daniel Ortega. Meanwhile, a fake scandal about psychosonic weapons used on U.S. Embassy staffers in Havana has defined U.S.-Cuba relations in the Trump era. Trump has also reinstated travel and business restrictions with Cuba.

In the case of Brazil, Trump has heaped praise on the anti-gay, anti-indigenous new president, Jair Bolsonaro, who has promised to purge his country of leftists.

Dear Mr. President @realDonalTrump, I truly appreciate your words of encouragement. Together, under God’s protection, we shall bring prosperity and progress to our people! https://twitter.com/realDonaldTrump/status/1080164786330132480 …

Congratulations to President @JairBolsonaro who just made a great inauguration speech – the U.S.A. is with you!

23.4K people are talking about this

In Honduras, where the U.S. backed a right-wing coup in 2009, the U.S. has continued to support the government, not even batting an eye as environmental activist Berta Cáceres was assassinated by a death squad with links to the government in 2016. Such private mercenaries with government connections continue to present a danger to journalists, judges and others living in the country.

The U.S. also continues to work with the notoriously corrupt president of Guatemala, Jimmy Morales, even after he sent armed military vehicles to the U.S. Embassy in order to intimidate the American ambassador out of supporting an anti-corruption group.

Since she was dragged through the mud for her vocal opposition to the coup in Venezuela, Omar has not stopped poking holes in the humanitarian narratives about U.S. intervention. On Sunday, she tweeted out a video of Trump taken in 2011 calling for a “humanitarian” intervention to “save lives” in Libya.

“After it’s all done, we go to the protesters who end up running the country … and we should then say, ‘by the way, from all of your oil, we want reimbursement,’” Trump continued.

In a separate clip tweeted by Omar, Trump bemoans the fact that the U.S. did not demand “50 percent of [Libya’s] oil.”

The NATO-backed regime change in Libya in 2011 deposed Libya’s leader Muammar Gaddafi, ushering in an era of lawlessness and power grabs in the country. Today, black Africans are sold as slaves in the country, which was once the richest nation in Africa.

Venezuela, like Libya, has used the profits from its vast oil reserves to benefit the people at the expense of multinational corporations.

While it remains to be seen whether Omar’s voting record, including from her seat on the House Foreign Affairs Committee, will back up her rhetoric as a steadfast anti-interventionist, she is showing an impressive understanding of America’s historical role in Latin America. And more importantly, Omar is showing that she is onto the “humanitarian intervention” canard that has served as a pretext in the past decades to the destruction of large swaths of the Middle East and North Africa.