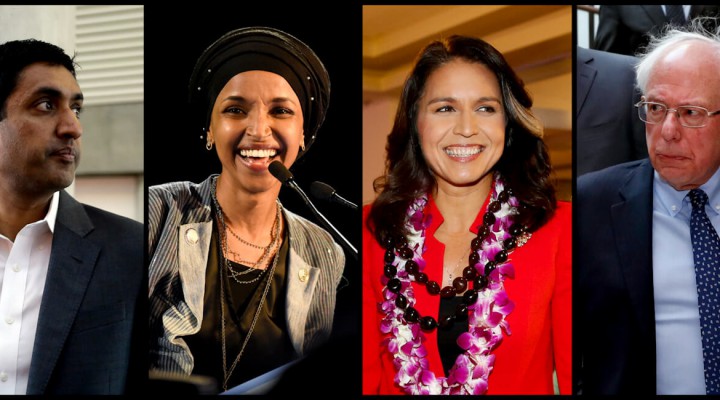 MPN- “The United States needs to stay out of Venezuela. Let the Venezuelan people determine their future. We don’t want other countries to choose our leaders — so we have to stop trying to choose theirs.” — Democratic presidential candidate Rep. Tulsi Gabbard (D-HI)

Democrats have remained largely silent since the U.S. wasted no time in lavishing its pre-emptive blessing on a coup in Venezuela earlier this week, beginning with Vice President Mike Pence’s video address on Tuesday followed by President Trump’s recognition of Juan Guaido, a relatively obscure figure in Venezuelan politics, as the legitimate president. Some prominent Democrats, such as former New Mexico Governor and U.S. diplomat Bill Richardson, have openly backed the coup alongside Trump; President Obama’s ambassador to Russia came out in support of the attempted regime change, and House Speaker Nancy Pelosi also endorsed the coup.

I support the Trump administration’s decision to recognize interim-president Guaidó in Venezuela. At the same time, Trump’s commitment to Venezuelan democracy would look more credible if he had not embraced with reservation autocrats in North Korea, Saudi Arabia, and Russia.

111 people are talking about this

But, as journalist Dan Cohen noted, “the younger [Democratic] members of Congress” are voicing their objections.

Congressman Ro Khanna (D-CA) was the first to condemn the move, tweeting:

The U.S. should not anoint the leader of the opposition in Venezuela during an internal, polarized conflict. Let us support Uruguay, Mexico, & the Vatican’s efforts for a negotiated settlement & end sanctions that are making the hyperinflation worse.”

“The United States needs to stay out of Venezuela. Let the Venezuelan people determine their future,” Gabbard tweeted. “We don’t want other countries to choose our leaders — so we have to stop trying to choose theirs.”

So far, Gabbard is the only official 2020 contender for the Democratic presidential nomination who has spoken out about the coup.

Good afternoon. You can be critical of regime change without whitewashing the Venezuelan government.

Of course, you can also speak out against US backed coups without signaling that you support the justification for them, especially since such coups are inherently bad regardless of your personal opinion of the targeted government.

Omar went even further in characterizing the absurdity of Trump anointing Guaido to the presidency by unilateral decree, tweeting:

We cannot hand pick leaders for other countries on behalf of multinational corporate interests. The legislature cannot seize power from the President, and Venezuela’s Supreme Court has declared their actions unconstitutional.

If we really want to support the Venezuelan people, we can lift the economic sanctions that are inflicting suffering on innocent families, making it harder for them to access food and medicines, and deepening the economic crisis.”

“We should support dialogue, not a coup!” the freshman congresswoman concluded.

Representative Alexandria Ocasio-Cortez, a self-proclaimed “Democratic Socialist” like Sanders, retweeted Khanna but has not spoken on the issue herself. Sanders’ comments on the matter, however, have drawn ire from anti-interventionists, who argue that he was paying lip service to Washington’s talking points.

interesting lefty catnip from Sanders here mentioning prior US-backed coups but he left out the most relevant one. The one…. against Venezuela in 2002. https://twitter.com/SenSanders/status/1088573771395596293 …

But we must learn the lessons of the past and not be in the business of regime change or supporting coups—as we have in Chile, Guatemala, Brazil & the DR. The US has a long history of inappropriately intervening in Latin American nations; we must not go down that road again. 3/3

In a thread, Sanders devoted two tweets to criticizing the Venezuelan government before ultimately concluding that “we must learn the lessons of the past and not be in the business of regime change or supporting coups.”

While Khanna, Omar, and Gabbard were met with heavy backlash from the right for condemning the coup attempt, the first two were also met with the full fire and fury of the D.C. press corp. That’s because they quote-tweeted anti-war journalist Rania Khalek, who freelances for In the Now, an outlet that receives partial funding from Ruptly, a video news agency funded by the Russian government.

Danny, you used to promote an ISIS recruiter as an expert on the Syrian war. Maybe don’t whine about other people not vetting who they “signal boost.” http://exiledonline.com/shamiwitness-when-bellingcat-neocons-collaborated-with-the-most-influential-isis-propagandist-on-twitter/ … https://twitter.com/DGisSERIOUS/status/1088857015760416769 …

ShamiWitness: When Bellingcat & Neocons Collaborated With The Most Influential ISIS Propagandist On…

you should be more wary of the type of people you’re signal boosting, especially those who whitewash the crimes of the Assad regime and work for Russian state media.

87 people are talking about this

“This attempted coup in Venezuela became a litmus test for this new wave of progressive members of Congress, for leftists who remain skeptical of the Democratic party,” Khalek told MintPress News on Friday, continuing:

I think Ro Khanna, Ilhan Omar and Tulsi Gabbard have demonstrated extreme bravery in speaking out against the Trump administration’s right-wing coup in Venezuela. They are doing this in a hawkish climate where the leadership of their own party is supporting Trump’s aggression, so it opens them up to all kinds of attacks, but that didn’t stop them. They should be applauded.”

Khalek had been pushing Democrats on Twitter to denounce the coup, and it appears Khanna and Omar were receptive.

Let me get this straight. The US is sanctioning Venezuela for their lack of democracy but not Saudi Arabia? Such hypocrisy. Maduro’s policies are bad and not helping his people, but crippling sanctions or pushing for regime change will only make the situation worse. https://twitter.com/RaniaKhalek/status/1088088495355293696 …

Leading Democrats are backing the Trump administration’s right wing coup in Venezuela. Now would be a good time to hear some opposition to this blatant American meddling from progressives Democrats like @RoKhanna, @AOCc @RashidaTlaib, @Ilhan and so on. Please speak up https://twitter.com/HouseForeign/status/1083527700189466624 …

3,591 people are talking about this

The U.S. is sanctioning Venezuela for their lack of democracy but not Saudi Arabia? Such hypocrisy. Maduro’s policies are bad and not helping his people, but crippling sanctions or pushing for regime change will only make the situation worse.”

This is the best and most detailed statement I’ve seen so far from a Democrat on Venezuela. @IlhanMN as well as her other colleagues who spoke out should be commended for opposing Trump’s coup attempt, this will surely provoke malicious attacks from the pro-war crowd. Very brave https://twitter.com/IlhanMN/status/1088829933508534273 …

996 people are talking about this

Both Khanna and Omar were then subjected to intense backlash. 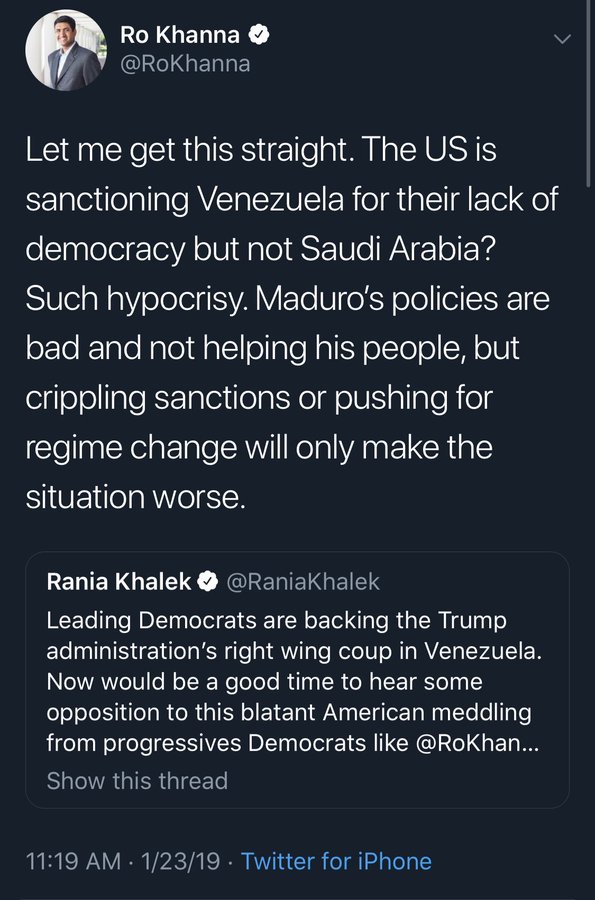 Let me get this straight. The US is sanctioning Venezuela for their lack of democracy but not Saudi Arabia? Such hypocrisy. Maduro’s policies are bad and not helping his people, but crippling sanctions or pushing for regime change will only make the situation worse. https://twitter.com/RaniaKhalek/status/1088088495355293696 …

155 people are talking about this

ThinkProgress reporter Casey Michel phoned Khanna’s spokesperson to inform them that Khalek works for a “Russian propaganda outlet.” He then attacked Khanna for retweeting journalist Ben Norton, “whom RT described as a contributor a few months ago.”

But the description, as presented by Michel, is misleading as Norton has never worked for a state-funded outlet nor has he been paid by one.

The GOP is in the pocket of authoritarian kleptocrats and our needed saviors on the Left are RT’ing Kremlin propagandists: https://twitter.com/zatchry/status/1088655737742598144 … 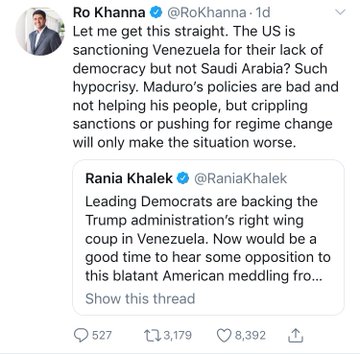 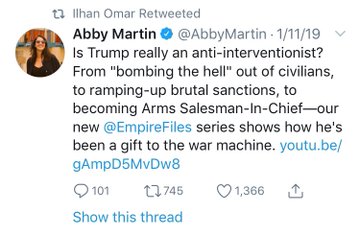 76 people are talking about this

“Here is a U.S. Representative (D-CA) tweeting an employee of Russian state media on Venezuela and a notorious pro-Assad apologist,” tweeted Michael Weiss — a leading neoconservative “expert,” who once organized a rally with far-right Islamophobe Pam Geller and is often cited by U.S. media to drum up popular support for the proxy war in Syria — in response to Khanna. Weiss later attacked Omar as well.

Looks like Dana Rohrabacher’s been replaced already. Here is a US Representative (D-CA) tweeting an employee of Russian state media on Venezuela and a notorious pro-Assad apologist:

302 people are talking about this

Journalist Jordan Schachtel decried a “congresswoman on the Foreign Affairs Committee giving props to a woman who has worked directly for the governments of Russia and Qatar.” Khalek used to freelance for Al Jazeera, which is funded by Qatar.

Israeli journalist Elizabeth Tsurkov accused Khalek of having spent “years justifying and whitewashing the war crimes of the Assad regime and Russia in Syria” because of her critical reporting on jihadist rebel groups. Tsurkov was on reserve with the IDF as recently as 2011, although she claims to no longer be.

By vocally opposing this attempted coup, these members of Congress naturally provoked an onslaught of outrage from pro-war liberals and neocons who aren’t used to seeing people in positions of power challenge the regime-change machine. One of their tactics is malicious guilt-by-association mixed in with a bit of McCarthyism. It’s all about attacking the character of the messenger to distract from the antiwar content of their argument.”