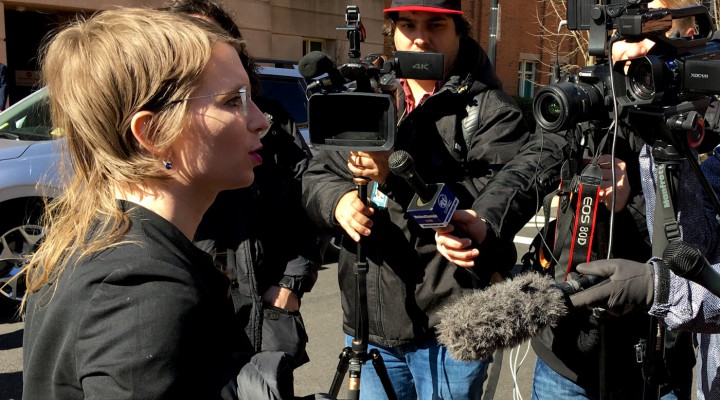 MPN- “If you end up going to trial rather than taking a plea, they actually use it against you in sentencing. They do something called ‘sentencing enhancement’ and they call it ‘failure to take responsibility.’” — CIA-Torture Whistleblower John Kiriakou

Whistleblower Chelsea Manning is fighting a grand jury subpoena in Alexandria, Virginia. On Tuesday, Manning spoke to reporters after she and her lawyer unsuccessfully motioned to quash the subpoena.

The subpoena is widely believed — but not confirmed — to be related to sealed charges against WikiLeaks editor Julian Assange, whose prosecutors were seen at the courthouse in the Eastern District of Virginia (EDVA) on Tuesday. Charges against the journalist were inadvertently revealed in a filing error in the district last year.

“They call EDVA the ‘rocket docket’ because the judges there are committed to pushing cases through the system as quickly as possible,” CIA-torture whistleblower John Kiriakou told MintPress News. Kiriakou spent nearly two years in prison for exposing the CIA torture program, and was tried at the Alexandria, Virginia rocket docket. He added:

In my own case, we wanted to block off three weeks for jury selection and the judge told us that we had two days and that if we couldn’t [settle] on a jury in two days she was going to do it for us. They hate when you ask for extensions and sometimes will deny an extension, especially if the extension is requested by the prosecution, only because they want to just force these things through as quickly as possible. And then, if you end up going to trial rather than taking a plea, they actually use it against you in sentencing. They do something called ‘sentencing enhancement’ and they call it ‘failure to take responsibility.’”

Kiriakou further stated that “if you go to trial, you turn down a plea offer, you’re convicted,” you will “actually get extra time.” He characterized the court’s rationale thus:

You were guilty, you should have taken the plea, you wasted their time by going to trial, you messed up the rocket docket, you have to pay.

It’s neanderthal in its outlook. That’s not justice.

Because of the rocket docket’s proximity to Washington, D.C. and the CIA, critics argue that finding an unbiased jury pool in the EDVA is an impossible task.

The U.S. government has been using grand jury subpoenas as a tactic to bring down WikiLeaks since at least 2011, when it looked at what were believed to be violations of the Espionage Act and conspiracy charges against WikiLeaks staff over the Manning leaks.

For her part in exposing U.S. war crimes — including the infamous “Collateral Murder” video, which depicts the extrajudicial killing of Iraqis and two journalists with Reuters — Manning was given the longest espionage sentence in U.S. history in 2013, before it was commuted in the final days of Obama’s presidency.

Back in 2013, Manning characterized herself as a “transparency advocate.” Now, faced with a subpoena for what appears to be yet another grand jury in the Assange case, Manning stressed the lack of transparency in grand jury proceedings.

“I think that in the interest of transparency, what we really want to do is get the motion made public because it’s currently sealed, and also to have the hearings to hear the motion be made public. As it stands right now, it’s all sealed,” Manning told reporters outside the courthouse.

“We have good reason to believe that the subpoena is improper and we want to lay out the reasons why, but as it stands the reasons why are sealed,” Manning added. She went on to rail against grand juries:

It’s a non-adversarial process, and I think that’s contrary to how — especially doing this in secret — it’s very contrary to the public interest, so I have been very opposed to the whole idea of grand juries in general.”

Although MintPress did not mention Assange by name, Manning was reticent to respond to questions about press freedom under the Trump administration without more certainty in the case, promising:

We’re going to find out more and whenever we find out whatever we can, we’re certainly going to — I want to be as transparent about what’s going on as possible — but we still don’t actually know what this is about.”

Manning distinguished herself as a fully-committed activist after her release from prison. She campaigned relentlessly for a group of people arrested during protests against Trump’s inauguration on January 20, 2017 (J20). More than 200 people, initially charged with rioting, were the subject of a grand jury investigation that brought additional charges against them carrying a maximum penalty of 60 years in prison. Ultimately, and in part thanks to the advocacy of Manning and others — as well as sloppy police work that relied heavily on a discredited right-wing media activist group called Project Veritas — not a single J20 defendant was convicted at trial.

Full disclosure: the author of this article was arrested while reporting on the protests. His charges were dropped prior to a superseding indictment being issued by the grand jury, which brought additional charges against the remaining 200-plus defendants.

Chelsea Manning @xychelsea takes my question on #J20 ahead of next week’s trials. Says “we can’t have people go out and protest and then go to jail and have them be left behind. They’re still apart of a political movement.” #DropJ20 #DefendJ20 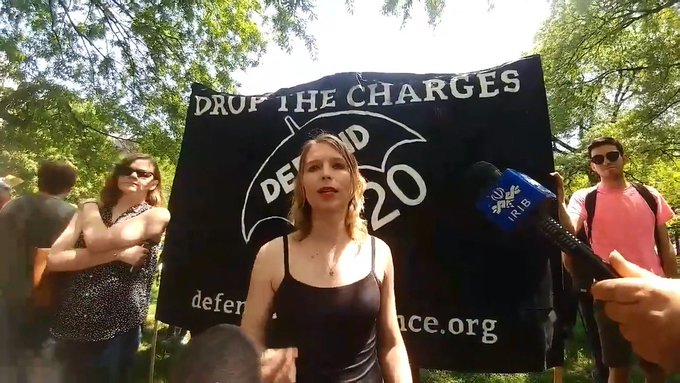 126 people are talking about this

As Manning and her lawyer, Moira Meltzer Cohen, fought to quash the subpoena and make public their motion to do so, Janus Rose — a spokeswoman for a “support committee” called “Chelsea Resists,” set up to support Manning’s “fight against the grand jury subpoena” — spoke at length to MintPress News:

Grand juries are an extremely secretive process that essentially amount to a phishing expedition for evidence that can be used against activists in a way that’s totally non-transparent and unaccountable. Prosecutors effectively have free rein to call witnesses to ask whatever they want and to do it all in secrecy and to do so in a way where the people who are being questioned don’t even know what they’re being asked until they get to the courtroom. This creates a lot of trouble within activist communities, when oftentimes just the presence of a grand jury subpoena or somebody receiving a grand jury subpoena will be sufficient to cause a lot of consternation and paranoia within the activist community.

Chelsea [Manning] is no exception to this; she has been active with various groups since she got out of prison, has attended rallies, [and] has been a really effective activist — on the ground and through using her public platform to emphasize a lot of issues that haven’t been getting press or attention for a long time now.

Obviously this is something that a grand jury could potentially ask her about. To be clear, we don’t know what the grand jury is trying to ask her about — she doesn’t know either. Any sort of guess to that is speculation, but because she has been subpoenaed it gives the grand jury the power to, in theory, ask her about anything — any kind of associations that she has; anything that could negatively affect the people around her, and even her.

“Our passion for freedom is stronger than their prisons.”

Chelsea is inside the courthouse motioning to unseal 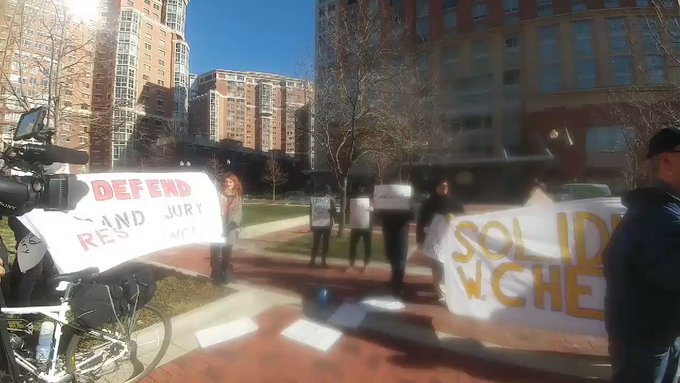 27 people are talking about this

In all grand jury cases, there are legal risks that are opened up associated with answering questions, of being exposed to possible perjury if you say the wrong thing because prosecutors are given wide latitude to ask whatever they want over and over again. So, there is a legal risk and I think that it’s not acceptable for Chelsea to be exposed to this kind of risk, especially after all the things that she has done and all the time she has already served and has been commuted for.”

While Manning was unsuccessful in getting the motion to quash the subpoena approved and in unsealing the motion itself, she promised to return to court on Wednesday, stating: “We still have ground to litigate, so we’re going to be here tomorrow. The motion is still sealed, so at the end of the day, all the matters are sealed.”

A ruling on Manning’s motion to allow the press to see the pleadings was deferred, she said, adding: “There was an awful lot of government lawyers in there. As it stands, I’m going to be here tomorrow; so as far as we know, until this is resolved, I’m probably going to be here through the subsequent days.”

Manning concluded that it remains to be determined whether the government will attempt to compel her to testify during that time.