Suddenly Europe Is an Open Question – ‘A Nazi EU?’ 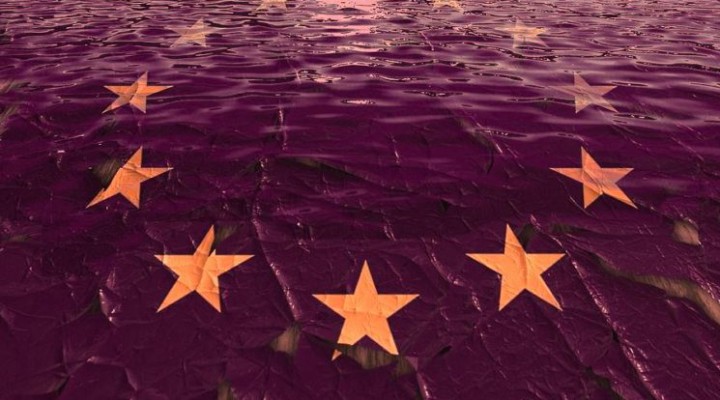 How, even after the disaster of Libya, European leaders can ignore the long history of interventions in Venezuela, to support a new intervention?

An establishment pillar of the European ‘order’ – the Frankfurter Allgemeiner newspaper – explicitly touches the ‘live rail’, which is to say, it ran an op-ed last month titled ‘A Nazi EU?’, speculating on whether or not the present EU, dominated by Germany, should be understood as a lineal extension of German National Socialism. This has not before been an issue at all touched upon in mainstream German discourse. That it appears at all signals something important: a recognition that the dissidence being experienced by the EU has its roots in something other than just populist grievance tantrums. It is the resurfacing of an ancient struggle for the ‘soul’ of the international political order.

“Corrupt, inflated, undemocratic and latent totalitarian apparatus” of the EU should have no future. Gauland traced a popular line of reasoning: Because democratic legitimacy deficits can be observed in EU supranational institutions, [one must conclude that the EU] must be a coercive regime. The radical opponents of progressive integration [however] go one step further: They compare the EU … to the European ideology under National Socialism …

“Gauland also [advanced] a recently popular argument, which [allows] Brexit to gain a historical justification: [Speaking about European Unification], Gauland in Riesa said: “This goal was pursued by the French under Napoleon and, unfortunately, in a way, by the National Socialists. And, as everybody knows, England opposed them.

“What [that means, is that Gauland takes us beyond the mere claim of the EU being] a ” latent totalitarian apparatus”. [Rather, it suggests that] the EU and German European politics are in continuity with the Nazi propaganda of the European Union. There can hardly be a worse reproach. It provides the AfD with the welcome side effect of being able to present itself as immune to Nazi ideology”.

Well, as might be expected, von Altenbockum sees little to connect the European project with earlier Nazi racial ideology, but nonetheless he does concede that it is not only Gauland and the AfD (“fast becoming the German Brexit party”) who see these national socialist connections, however “the continuity of the European project from the National Socialist era is also considered by historians”, especially since Germany has again been accused of hegemonic strivings in Europe. As early as 2002, Hitler biographer Thomas Sandkühler called for “not so much to emphasize the breaches in European politics, where there should be more talk of continuities”.

What did this mean? Today, it is difficult to move beyond the racial ideology aspect. But, despite the appearance of the word ‘national’ in the name of the German National Socialist party, Hitler was no great advocate of nationalism. He was a harsh critic not only of the Protestant Westphalian triumph of 1648, but also of the institution of the national state in particular, which he saw as vastly inferior to the Germans’ historic imperial legacy. In place of the order of national states he set out to establish a Third Reich that expressly drew its inspiration from the ‘First Reich’—that is, from the German Holy Roman Empire with its universal aspirations and thousand-year reign. Hitler’s Germany was thus intended as an imperial state in every sense.

In short, in the centuries’ old politics of Europe, Western nations have been characterized by a struggle between two antithetical visions of world order: an order of free and independent nations each pursuing the political good in accordance with its own traditions and understanding, and an order of peoples united under a single regime of law, promulgated and maintained by a single supra-national authority.

In other words, Germany was on the side of the ancient tradition extending from Babylon to Imperial Rome, who saw it as their task, in the words of the Babylonian king Hamurabi, to “bring the four quarters of the world to obedience.” That obedience, after all, was what ensured salvation from war, disease, and starvation.

Von Altenbockum’s conclusion that the origins of the ideas underlying European integration are not so much those of Napoleon or Hitler, but derive from the Thirty Year’s War and Westphalia, which precisely precipitated the fall of that old (Roman) notion of a Christian Universal Empire of peace and prosperity, is more compelling. To the victors, victory – and the victors set the narrative, one which remains as today’s European political paradigm.

The ‘Liberal’ construction of the EU is premised on that famous liberal manifesto: John Locke’s Second Treatise on Government, published in 1689 that asserted that there is ultimately only one principle at the base of legitimate political order: namely, individual freedom.

Locke’s was very much a product of the Protestant construction. It opens with the assertion that all human individuals are born “perfectly free” and “perfectly equal,” and goes on to describe them as pursuing life, liberty, and property in a world of transactions based on consent.

From this premise, Locke built his model of political life and theory of government: And from Locke’s framework has descended to us today’s economic model – in Adam Smith’s transposition of John Locke’s and John Hume’s Protestant vision of individualism and property into an economic structuring.

But being Protestant, this vision also took from the Old Testament (rather than the New), sovereign ‘authority’ (like Yahweh) was jealous and intolerant and unitary sovereign. One authority, one law, one ‘gun’ was the organisational principal of the nation-state (rather than the overlaid call of an ‘empire’ of confused sovereignties and spiritual allegiances that had preceded it).

At some point, liberal political, economic theory and international law crushed the life out of other, competing accounts, becoming the virtually unquestioned framework for what an educated person needs to know about the political world.

So what? What is the point? Well, firstly, it is that the AfD leader, Alexander Gauland, is saying that the EU is neither liberal, nor free, nor an ‘order’ (or Empire), but is coercive in its (secularised, Judeo-Christian) desire to achieve human or social unity through reducing ‘all’ to a single model (the liberal, regulated, EU ‘order’).

The point here is not just that such an establishment German publication should be touching such a ‘hot button’ issue (the possible influence of German national-socialism as the scaffold, on which EU politics is structured); but more substantively, through the tacit admission that that the AfD leader has a point (i.e. he is advancing the ‘other’ grand vision for Europe’s political order).

The author duly concedes this: “there are many politicians in the AfD who would like to return to traditional equilibrium thinking” (a concert of independent sovereign powers). But then – echoing the Establishment line – the author says simply that it is impossible: Too much has been invested in the EU project to permit it to be yielded-up.

The ‘retrospective’ after the Second World War, von Altenbockum says, led to the [EU project] “being given an immovable, institutional anchorage, which inevitably involves a renunciation of sovereignty”.

But it is here that Brexit takes meaning for Gauland: Not simply as British resentment at Germany’s domination of Europe, but because England consistently was ‘on the other side’, opposing these visions of a universalism imposed through a reduction to a single model of empire – “as everyone knows, England opposed them”, Gauland states.

Locke, it is true, sought to strengthen the nation-state paradigm and not undermine it. Nevertheless, in fashioning his theory he downplayed or entirely omitted essential aspects to human society. In the Second Treatise, Locke abstracts away the intellectual, spiritual or cultural inheritance that one receives through descent. The result is the depreciation of even the most basic bonds that had been thought to hold society together.

Similarly, the government that is brought into being by the social contract of the Second Treatise is eerily without borders or boundaries. Institutions such as the national state, community, family, and the church appear to have no reason for existing at all. Without intending it, the framework provided by Locke’s Treatise makes the Protestant ‘order’ exceedingly difficult to explain, much less justify. He may have intended otherwise, but what he did was to give birth to a ‘liberal’ construction of politics which underpins the opposite of the nation-state.

What does this mean? Brexit, les gillets jaunes, la Lega, the Afd, the Visegrad group – the future of Europe is in serious contention, despite the fact that University-educated political and intellectual elites in America and Europe are now mostly sequestered within the liberal frame.

Yet an article such as this piece from the Frankfurter Allgemeiner newspaper – and its discussion of the purported link between European integration and national socialism – Wolfgang Münchau remarks, represents “an explosive connection” hitherto confined only to fringe discussion in Germany. It underlines that the Euro-élite are beginning to recognize the potential combustibility of this conflict. They can see that real issues – ancient struggles about the very nature of politics, society, culture and how human potential is to be developed – are at issue.

And to understand this gives the framework to understand European foreign policy: How, even after the disaster of Libya, European leaders can, for example, ignore the long history of interventions in Venezuela, to support a new intervention. Or, wish to withhold reconstruction finance and assistance from Syria. It recalls the Babylonian king’s desire to “bring the four quarters of the world to obedience”. That obedience, after all, being in their own best interest.

Is it going too far for Gauland to have described the EU as ‘latent totalitarian’? Well, Yanis Varoufakis gives us the flavour of it: from his first visit to Brussels and Berlin as Greece’s freshly elected finance minister: “When Schäuble welcomed me with his “it is my mandate against yours” doctrine, he was honouring a long EU tradition of neglecting democratic mandates in the name of respecting them. Like all dangerous hypotheses, it is founded on an obvious truth: the voters of one country cannot give their representative a mandate to impose upon other governments conditions that the latter have no mandate, from their own electorate, to accept. But, while this is a truism, its incessant repetition by Brussels functionaries and political powerbrokers, such as Angela Merkel and Schäuble himself, is intended to convert it surreptitiously into a very different notion: no voters in any country can empower their government to oppose Brussels.”

“My team and I worked hard to put forward proposals based on serious econometric work and sound economic analysis. Once these had been tested on some of the highest authorities in their fields, from Wall Street and the City to top-notch academics, I would take them to Greece’s creditors in Brussels, Berlin and Frankfurt. Then I would sit back and observe a symphony of blank stares. It was as if I had not spoken: As if there was no document in front of them. It would be evident from their body language that they denied the very existence of the pieces of paper I had placed before them. Their responses, when they came, would be perfectly independent of anything I had said. I might as well have been singing the Swedish national anthem. It would have made no difference.”

Suddenly Europe Is an Open Question – ‘A Nazi EU?’

0 thoughts on “Suddenly Europe Is an Open Question – ‘A Nazi EU?’”