HOME / SOCIAL/CULTURAL / Now or Never: The Great ‘Transition’ Must Be Imposed 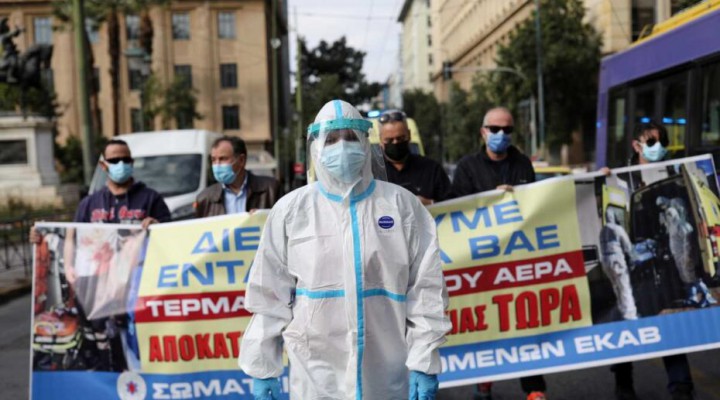 A new wave of restrictions, more lockdowns, and – eventually – trillions of dollars in new stimmie cheques may be in prospect.

Were you following the news this last week? Vaccine mandates are everywhere: one country, after another, is doubling-down, to try to force, or legally compel, full population vaccination. The mandates are coming because of the massive uptick in Covid – most of all in the places where the experimental mRNA gene therapies were deployed en masse. And (no coincidence), this ‘marker’ has come just as U.S. Covid deaths in 2021 have surpassed those of 2020. This has happened, despite the fact that last year, no Americans were vaccinated (and this year 59% are vaccinated). Clearly no panacea, this mRNA ‘surge’.

Of course, the Pharma-Establishment know that the vaccines are no panacea. There are ‘higher interests’ at play here. It is driven rather by fear that the window for implementing its series of ‘transitions’ in the U.S. and Europe is closing. Biden still struggles to move his ‘Go-Big’ social spending plan and green agenda transition through Congress by the midterm election in a year’s time. And the inflation spike may well sink Biden’s Build Back Better agenda (BBB) altogether.

Time is short. The midterm elections are but 12 months away, after which the legislative window shuts. The Green ‘transition’ is stuck too (by concerns that moving too fast to renewables is putting power grids at risk and elevating heating costs unduly), and the Pharma establishment will be aware that a new B.1.1.529 variant has made a big jump in evolution with 32 mutations to its spike protein. This makes it “clearly very different” from previous variants, which may drive further waves of infection evading ‘vaccine defences’.

Translation: a new wave of restrictions, more lockdowns, and – eventually – trillions of dollars in new stimmie cheques may be in prospect. And what of inflation then, we might ask.

It’s a race for the U.S. and Europe, where the pandemic is back in full force across Europe, to push through their re-set agendas, before variants seize up matters with hospitals crowded with the vaccinated and non-vaccinated; with riots in the streets, and mask mandates at Christmas markets (that’s if they open at all). A big reversal was foreshadowed by this week’s news: vaccine mandates and lockdowns, even in highly vaccinated areas, are returning. And people don’t like it.

The window for the Re-Set may be fast closing. One observer, noting all the frenetic Élite activity, has asked ‘have we finally reached peak Davos?’. Is the turn to authoritarianism in Europe a sign of desperation as fears grow that the various ‘transitions’ planned under the ‘re-set’ umbrella (financial, climate, vaccine and managerial expert technocracy) may never be implemented?

Cut short rather, as spending plans are hobbled by accelerating inflation; as the climate transition fails to find traction amongst poorer states (and at home, too); as technocracy is increasingly discredited by adverse pandemic outcomes; and Modern Monetary Theory hits a wall, because – well, inflation again.

Are you paying attention yet? The great ‘transition’ is conceived as a hugely expensive shift towards renewables, and to a new digitalised, roboticised corporatism. It requires Big (inflationary) funding to be voted through, and a huge parallel (inflationary) expenditure on social support to be approved by Congress as well. The social provision is required to mollify all those who subsequently will find themselves without jobs, because of the climate ‘transition’ and the shift to a digitalised corporate sphere. But – unexpectedly for some ‘experts’ – inflation has struck – the highest statistics in 30 years.

There are powerful oligarchic interests behind the Re-Set. They do not want to see it go down, nor see the West eclipsed by its ‘competitors’. So it seems that rather than back off, they will go full throttle and try to impose compliance on their electorates: tolerate no dissidence.

A 1978 essay “The Power of the Powerless” by then dissident and future Czech President Vaclav Havel begins mockingly that, “A SPECTRE is haunting Eastern Europe: the spectre of what in the West is called ‘dissent’”. “This spectre has not appeared out of thin air. It is a natural and inevitable consequence of the present historical phase of the system it is haunting.” Well, today, as Michael Every of Rabobank notes, “the West has polarisation, mass protests, riots, talk of obligatory vaccinations in Europe, and Yanis Varoufakis arguing capitalism is already dead; and that a techno-feudalism looms”. Now, prompting even greater urgency, are the looming U.S. midterms. Trump’s return (even if confined just to Congress), would cut the legs from under BBB, and ice-up Brussels too.

It was however, precisely this tech revolution, to which Varoufakis calls attention, that both re-defined the Democrat constituency, and turned tech oligarchs into billionaires. Through algorithmically creating a magnetism of like-minded content, cascaded out to its customers, it has both smothered intellectual curiosity, and created the ‘un-informed party’, which is the today’s Managerial Class – the party of the credentialed meritocracy; the party, above all, smugly seeing themselves as the coming era’s ‘winners’ – unwilling to risk a look behind the curtain; to put their ‘safe space’ to the test.

Perversely, this cadre of professionally-corralled academics, analysts, and central bankers, all insist that they completely believe in their memes: That their techno-approach is both effective, and of benefit to humanity – oblivious to the dissenting views, swirling around them, down in the interstices of the internet.

The main function then of such memes today, whether issued by the Pharma Vaccine ‘Command’; the MMT ‘transition’ Command; the energy ‘transition’ Command; or the global managerial technocracy ‘transition’, is to draw a ‘Maginot line’ – a defensive ideological boundary, a “Great Narrative” as it were – between ‘the truth’ as defined by the ruling classes, and with that of any other ‘truth’ that contradicts their narrative. That is to say, it is about compliance.

It was well understood that all these transitions would overturn long-standing human ways of life, that are ancient and deeply rooted and trigger dissidence – which is why new forms of social ‘discipline’ would be required. (Incidentally, the EU leadership already refer to their their official mandates as ‘Commands’). Such disciplines are now being trialled in Europe – with the vaccine mandates (even though scientists are telling them that vaccines cannot be the silver bullet for which they yearn). As one high ‘lodge’ member, favouring a form of global governance notes, to make people accept such reforms, you must frighten them.

Yes, the collective of ‘transitions’ must have their ‘Big, overarching Narrative’ – however hollow, it rings (i.e. the struggle to defend democracy against authoritarianism). But it is the nature of today’s cultural-meme war that ultimately its content becomes little more than a rhetorical shell, lacking all sincerity at its core.

It serves principally, as decoration to a ‘higher order’ project: The preservation of global ‘rules of the road’, framed to reflect U.S. and allied interests, as the base from which the clutch of ‘transitions’ can be raised up into a globally managed order which preserves the Élite’s influence and command of major assets.

This politics of crafted, credentialised meme-politics is here to stay, and now is ‘everywhere’. It has long crossed the partisan divide. The wider point here – is that the mechanics of meme-mobilisation is being projected, not just in the western ‘home’ (at a micro-level), but abroad, into American ‘foreign policy’ too (i.e. at the macro-level).

And, just as in the domestic arena, where the notion of politics by suasion is lost (with vaccine mandates enforced by water-cannon, and riot police), so too, the notion of foreign policy managed through argument, or diplomacy, has been lost too.

Western foreign policy becomes less about geo-strategy, but rather is primordially focussed on the three ‘big iconic issues’ – China, Russia and Iran – that can be given an emotional ‘charge’ in order to profitably mobilise certain identified ‘constituencies’ in the U.S. domestic cultural war. All the various U.S. political strands play this game.

The aim is to ‘nudge’ domestic American psyches (and those of their allies) into mobilisation on some issue (such as more protectionism for business against Chinese competition), or alternatively, imagined darkly, in order to de-legitimise an opposition, or to justify failures. These mobilisations are geared to gaining relative domestic partisan advantage, rather than having strategic purpose.

When this credentialled meme-war took hold in the U.S., millions of people were already living a reality in which facts no longer mattered at all; where things that never happened officially, happened. And other things that obviously happened never happened: not officially, that is. Or, were “far-right extremist conspiracy theories,” “fake news,” or “disinformation,” or whatever, despite the fact that people knew that they weren’t.

Russia and China therefore face a reality in which European and U.S. élites are heading in the opposite direction to epistemological purity and well-founded argument. That is to suggest, the new ‘normal’ is about generating a lot of contradictory realities, not just contradictory ideologies, but actual mutually-exclusive ‘realities’, which could not possibly simultaneously exist … and which are intended to bemuse adversaries – and nudge them off-balance.

This is a highly risky game, for it forces a resistance stance on those targeted states – whether they seek it, or not. It underlines that politics is no more about considered strategy: It is about being willing for the U.S. to lose strategically (even militarily), in order to win politically. Which is to say gaining an ephemeral win of having prompted an favourable unconscious psychic response amongst American voters.

Russia, China, Iran are but ‘images’ prized mainly for their potential for being loaded with ‘nudge’ emotional-charge in this western cultural war, (of which these states are no part). The result is that these states become antagonists to the American presumption to define a global ‘rules of the road’ to which all must adhere.

These countries understand exactly the point of these value and rights-loaded ‘rules’. It is to force compliance on these states to acquiesce to the ‘transitions, or, to suffer isolation, boycott and sanction – in a similar way to the choices being forced on those in the West not wishing to vaccinate (i.e. no jab; no job).

This approach reflects an attempt by Team Biden to have it ‘both ways’ with these three ‘Iconic States’: To welcome compliance on ‘transition issues’, but to be adversarial over any dissidence to mounting a rules framework that can raise the ‘transitions’ from the national, to the supra-national plane.

But do the U.S. practitioners of meme-politics, absorb and comprehend that the stance by Russia-China – in riposte – is not some same-ilk counter-mobilisation done to ‘make a point’? That their vision does stand at variance with ‘the rules’? Do they see that their ‘red lines’ may indeed be ‘red lines’ literally? Is the West now so meme-addicted, it cannot any longer recognise real national interests?

This is key: When the West speaks, it is forever looking over its shoulder, at the domestic, and wider psychic impact when it is ‘making a point’ (such as practicing attacks by nuclear-capable bombers as close to Russia’s borders as they dare). And that when Russia and China say, ‘This is our Red Line’, it is no meme – they really mean it.

Biden is unlikely to be the Democrat candidate

Do Americans Have a Future?

0 thoughts on “Now or Never: The Great ‘Transition’ Must Be Imposed”