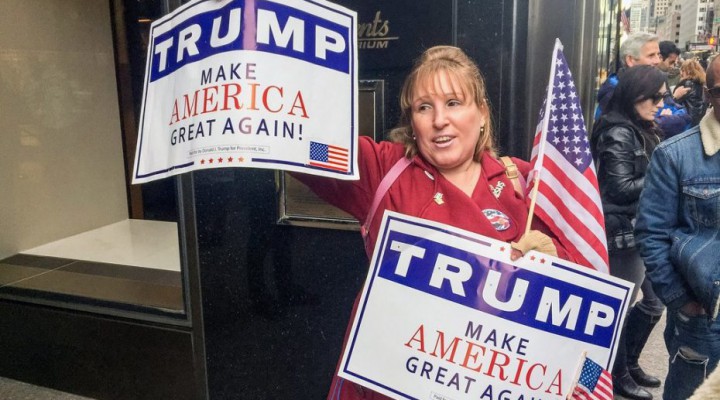 The ‘max pressure’, Make America Great Again formula is not going to work, for the simple reason that it is consuming America’s ‘capital stock’ at a torrential rate. It will neither restore America’s manufacturing base, nor will it recover to America it’s political hegemony.

The ‘max pressure’, Make America Great Again formula is not going to work, for the simple reason that it is consuming America’s ‘capital stock’ at a torrential rate. It will neither restore America’s manufacturing base, nor will it recover to America it’s political hegemony. It polarises widely. All the world now understands that MAGA is about gaining whatever advantage there is that can be accrued to the US, whilst making everyone else pay the price – and pick up the loss. Even the Europeans have ‘got that’ now. Trumpism lacks ‘dimension’ beyond the mercantile. Yet, if it could narrate cultural ‘sovereignty-ism’ as something more than being mere ‘anti-identity politics’, and narrow advantage, it might find some wider sustainability.

As it is, the narrowly defined MAGA policy, simply is eating both into America’s political capital – and, is eating away at America’s unparalleled privilege of being able to consume at a higher standard of living than others on the US reserve currency, ‘credit card’, which requires no settlement by the US of its debit dollar balances. By sanctioning ‘the world’ and playing so loose with dollar hegemony and the Bretton Woods system, the US ultimately will lose it all. It will then face the unpleasant experience of having to pay – with something of real value – for all that it consumes. It will shock.

It is true that the global system sorely needed a shake-up, and Trump’s iconoclasm has been, as it were, to that extent, a creative-destructive force that opens the path to seeding something new. But the ‘disrupter’ impulse can become an unmitigated train-wreck, absent any balancing fecundity which might bring some synthesis or ultimate harmony.

For now, there is no sight of any figure around President Trump that has either the insight, or the political ‘savoir fare’, to lead the US President out from his ‘corner’. On the contrary, a train-wreck in foreign policy – and ultimately – in monetary policy too (as the ‘Fed’ keeps fuelling the financial bubble, while the real economy moulders) – seems ahead. Maximum pressure has not harvested its anticipated political dividends – instead it is dangerously escalating global tensions.

Trump’s foreign policy both has been centred around – and blighted by – his deep-seated antipathy towards Iran. It lies at the apex of his Greater Israel policy, and his 2018 tweet that “Anyone doing business with Iran will NOT be doing business with the United States. I am asking for WORLD PEACE, nothing less!” (capitalisation is Trump’s).

The collateral damage cascading from the obsession that Iran represents ‘cosmic evil’, and if defeated, WORLD PEACE is somehow assured, is spreading: Russia’s refusal to pivot against Iran represents the principal reason for the souring of Trump’s relations with President Putin. Iran policy is dividing Europe from America. It has become a substantive impediment in the China relationship (as China requires energy security, and is not prepared to join the boycott). And the US Iran policy may yet result in global economic damage (should the oil risk heighten). The Middle East already is roiling, and Iran has become the universal US bureaucratic pretext for why American forces must be kept in place in place across regional conflicts. (They are required there ‘to contain Iran’).

As Daniel Larison writes in The American Conservative, Trump’s Iran “policy is one of regime change in all but name, and Trump has signed off on everything that has made it so. He has no problem waging economic war on Iran, and he has given the hawks virtually everything they want. Trump’s Iran policy is “the hawkish policy” in action, and if it is a disaster, that is because the “hawkish policy” was guaranteed to be one… The president is fixated on nuclear weapons because his National Security Advisor has been running around for months promoting the lie that Iran seeks nuclear weapons, and he and other advisers have managed to convince (dupe) Trump of another lie: that the JCPOA “permits” Iran to acquire nuclear weapons”.

And here is why, Larison observes:

“Iran hawks [have long] opposed the deal because they [never] wanted Iran to benefit from sanctions relief … Iran hawks … [keep] up the pretense that they want a “better deal” [because they] spent the previous 15 years before the JCPOA, hyperventilating about a potential Iranian nuclear weapon, often absurdly describing it as an “existential threat.” For most of this century, many Iran hawks wouldn’t shut up about the need for preventive military action against Iran’s nuclear facilities. The nuclear issue was their pretext for conflict, and they hated it when the nuclear deal took that pretext away … So instead we get the endless carping about the “flaws” in the deal that aren’t really flaws, and the shameless goalpost-moving, that requires a non-proliferation agreement to solve all regional problems [all] at the same time.

“Trump has embraced these lies [and] has repeated them several times. Iran can’t negotiate with an administration that claims that the nuclear deal “permits” them to have nuclear weapons. They know that it doesn’t, and so they have to assume that there is no agreement they would be willing to make that would be acceptable to the administration. Sure enough, the administration’s latest talking point that Iran must agree to give up all enrichment confirms that the US is insisting on a concession that Iran is never going to make. Trump doesn’t want to talk to Iran as his predecessor did. He wants Iran to capitulate. That has always been the goal of “maximum pressure.” Trump’s Iran policy is definitely a hawkish policy, and that is why it is producing such awful results for the US and Iran.”

So, why have the hawks been so vehement in opposing the normalising of relations with Iran? It is because normalisation would shift the strategic balance away from those states favouring accommodation with Israel – towards the so-called resistance states who never have (in their view). PM Netanyahu has been adamant throughout that sanctions relief must never be offered to Iran – he sees US sanctions as the leverage to force Iran’s expulsion from Syria.

It is this intransigent stance that lay behind the failure of the tri-partite meeting of national security advisers of US Israel and Russia in late June. Netanyahu earlier had proposed to Putin that he (i.e Israel) represented the ‘gateway’ to opening doors in DC; that with Israeli endorsement, Netanyahu could bring the ending to US sanctions on Russia, but only were Mr Putin to agree to end Russia’s ties with Iran, and to isolate Tehran.

President Putin had countered with the offer that – were the US to lift sanctions on Iran, and withdraw its forces from Syria – then Russia would use its best endeavours to have Iran exit Syria. American and Israeli interests additionally, then would be ‘accommodated’ in a Syrian political settlement.

The Jerusalem trilateral, in short, was expected by Netanyahu to lay the ground work for a clear commitment by Russia to sever relations with Iran – and that this would be unveiled as the ‘grand outcome’ for Trump at the Osaka G20, following his one-on-one with Putin. It didn’t happen.

In the event, Netanyahu blankly refused any lifting of sanctions on Iran (arguing that sanctions represented real leverage over Iran’s presence in Syria), and the trilateral not only failed in its strategic objective, but the Russian representative at the trilateral, Nikolai Patrushev, while being friendly to Israel, did not abjure Iran. Quite the opposite: He denied Tehran is a threat to regional security. “Russia sides with Iran, against Israel and US. A senior Russian official stands by Tehran’s claim that US drone was shot down in Iranian airspace, defends rights of foreign troops to remain in Syria despite Israeli opposition”, concluded one Israeli journal.

And in consequence, the Osaka summit between Trump and Putin did not go well either: Trump merely handed Putin a list of US demands. Putin smiled sphinx-like, but did not answer.

But look: The White House’s Iran policy is but the lead ‘chariot’ heading towards a tight bend at Circo Massimo (Circus Maximus), and to a potential ‘pile up’. Close behind is US-Russia relations; the chariot of trade war with China, and in the tail, the laggard of trade war with Europe. Far more grave – for us all – would be if US-Russia relations slams into the stadium wall. And we are close to that happening: The incident with the Russian submersible that led to the loss of fourteen lives (whose details the parties prefer to keep quiet), and the letter from NATO insisting that Russia’s 9M729 ground-launched cruise missile systems breach the INF treaty and must be destroyed, all set a scene of gravely deteriorating relations.

Why would Trump risk so much on an ancient Middle Eastern quarrel? Why snub Putin over Iran? Maybe Trump has convinced himself of the narrative that Iran is indeed a cosmic evil, in the biblical sense. But his conversion to this ideology also happens to sit comfortably with his immediate interests:

Last week the summit of Christians United for Israel, took place in DC. Thousands of evangelical Christians from across the country attended the event, at which Mike Pence, Mike Pompeo (both evangelicals), as well as, John Bolton, Jason Greenblatt, and his ambassador to Israel, David Friedman all spoke. The theme, of course, was the Iranian threat.

“Evangelicals, the backbone of Christians United for Israel, are a key voting bloc for Trump and the Republicans. Around 80 percent of white evangelicals voted for Trump in 2016, helping him secure victories in several swing states. The consensus among US political analysts is that the president will need similar or greater support among evangelicals to win a second term next year.

“Last week, the news website Axios reported that Trump’s re-election campaign “is developing an aggressive, state-by-state plan to mobilize even more evangelical voters than supported him last time.” This will include, according to the report, “voter registration drives at churches in battleground states such as Ohio, Nevada and Florida,” which will promote Trump’s record on issues important to evangelical voters.”

And the primordial interest for these Evangelical voters? Moving toward actualising (Biblical) Greater Israel as a prophesy fulfilled. And here is the unsolved question – as Iran escalates its counter-pressures, in response, and as America’s strangulation hold tightens – what will Trump do?

“At the moment”, Ben Caspit, a leading Israel commentator notes, “Trump is influenced by his close advisers (mainly John Bolton and Mike Pompeo) who have adopted a hawkish stance and are not deterred at the thought of military involvement (at least aerial involvement) vis-a-vis Tehran. But the US president also has other mentors (some political and some from the media world) who claim that getting involved in a military adventure on the eve of elections would greatly reduce Trump’s chances of reelection to a second term of office.”

Caspit however, does ‘nod’ towards the weight of the Evangelicals: “Israel has transformed this evangelical repository into a tremendous electoral-diplomatic-strategic asset over the last three years, vis-a-vis Trump’s administration. Netanyahu and his ambassador to Washington, Ron Dermer, have great influence over the evangelical preachers. The relationship between Israel and this American Christian-messianic faction has been deepening … [even to the point of rivalling AIPAC]”

“One thing is sure”, concludes Caspit: “The considerations and analyses in Israel surrounding the Iran issue at this point in time are completely different than what prevailed in the summer of 2012 … One way or another, anyone who thought that the issue of a possible Israeli attack on Iran has long since been removed from the agenda is welcome to catch up: It is returning”.