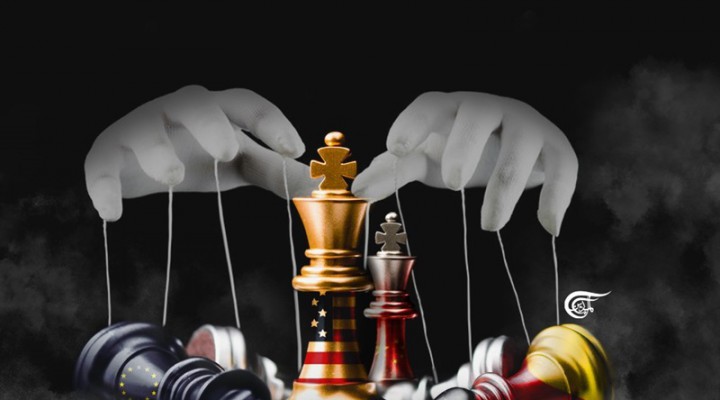 The Moscow-Berlin alliance had to be sabotaged to prevent further economic integration that would have drawn the continents closer together to form the world’s biggest free trade zone. Washington had to stop that in order to preserve its economic stranglehold on Europe, and what remains of dollar ‘privilege’.

Politico reported that as Americans go to the polls amid dynamic shifts in geo-politics, “around the EU quarter in the Belgian capital, officials are more likely to shrug, than fret, at the possibility of Republicans retaking control in Congress”.

What they are missing is that the coming shifts of events are long-term and structural. That is they pertain to physics, not to the language and thought-codes that Europeans somehow believe can transcend hard realities. Even (EU-phile) Politico suggests this blasé attitude could prove yet another example of Europe failing to think things through.

Olaf Scholtz’s recent day-trip to Beijing is emblematic of this ‘thought-code’ style of politics that assumes that the latter trumps structural shift. Encapsulated in Scholtz’s approach is that, ‘One’, we have lost Russia as our source of cheap energy; ‘Two’ Germany cannot be expected to drop our special relationship with China, and ‘three’ that we, as Europe, expect you (China) to accommodate our ‘rules’ on ease of entry to your markets.

The sheer chutzpah is astonishing. The problem is that when you can no longer get cheap Russian gas, and when the Americans – your new ‘best friends’- won’t let you export sensitive engineering products or technologies to China, then your special relationship with China comes to a premature end.  You (Scholtz) have not thought this through.

Put simply, the US is pursuing a bi-partisan geopolitical strategy to quash China’s meteoric rise and preserve America’s dominant role in the world order.  Can there be any doubt about that?

No, none.  This is why the world is separating into two separate, warring trade blocs. This is why we are seeing the roll-back of the post-war era and massive supply-line disruption. And this is why Europe has been thrust headlong into crisis and forced deindustrialisation.

All of these policies were concocted for one purpose and one purpose alone: to maintain America’s exalted spot in the global system, at a time when its predatory economic model of ‘Titanic’ money-printing at zero interest has been holed by an iceberg, known as accelerating inflation!

Containing China is America’s explicit goal. Only this month, Biden launched a full-blown tech and chip war on China, committed to stopping its soaring rise. Germany (the EU) seemingly didn’t notice. Or, if they did, just ‘shrugged’ and said naught.

Again, Politico tells us most EU officials are predicting ‘more of the same’ after the Midterms: “Biden, after all, will still be president until at least early 2025. And on the most pressing issue, supporting Ukraine, European officials stress that Republicans and Democrats broadly agree”.  Oh yes?

Sure — for two decades US foreign policy has centred around its ‘pivot to Asia’. However, China’s strength and influence is at the cusp of being able to settle regional disputes in its own favour — and to displace US leadership.

Washington’s proxy war in Ukraine thus must be understood not as a war of values – as the EU projects it – but rather as a cruise missile launched at China, not Russia. In essence, the Washington foreign policy consensus sees Russia as an obstacle to its Asian ‘pivot’ plan — to encircle, isolate and weaken China.

In gist, the ‘high road’ to Beijing is perceived in DC to pass through Moscow. The NATO response to Ukraine is ‘a letter’ to China concerning Taiwan.

Can you – Europe – not see the problem here?  It is that YOU are part of the problem (from this perspective), and not in any way a solution — bar in one aspect (as a continuing member of the dollar sphere).

The Moscow-Berlin alliance – which was mutually beneficial and key to German (and EU) prosperity – had to be sabotaged to prevent further economic integration that would have drawn the continents closer together to form the world’s biggest free trade zone. Washington had to stop that in order to preserve its economic stranglehold on Europe, and what remains of dollar ‘privilege’.

You still don’t get it? Europe is America’s best friend; then why would America weaken it?  Actually, the aim was not particularly to weaken the EU per se. What mattered here was to keep Europe as a captive market for US business interests, and to ‘blow up’ (literally) any prospect that the EU should become the tail to an emerging Eurasian colossus.

And Scholtz really imagined that Germany could expect to keep its special arrangement with China?  It seems so.

But everything is ‘fine’ really, as the Brussels wisdom is based on “confidence that US parliamentarians will not only not reduce, but will increase and make the support for Ukraine more effective”. (Politico again).

Really? Europe is failing to think things through — again.  Repeat after me: Ukraine is a strategy to weaken Russia. But it is not working. Rather, it is Ukraine that, as Larry Johnson notes, is becoming a ‘crack addict‘, wholly dependent on his western ‘supplier’. Ukraine no longer has the ability to produce its own weapons, conduct mass troop training on its own territory, keep electricity flowing to the major cities, or maintain a viable economy. If aid from the West is disrupted or cut off – then Ukraine will no longer be able to continue to battle the Russians.

What happens then? The usual. The Ukraine as ‘flagship’ of liberal democracy will sink under the waves, quicker than the Titanic — just as did the great project of bringing modernity to Afghanistan. That sank in just 11 days. Few today mourn its passing.

Dear Brussels — think this through. American politics can pivot in a moment. Keep in mind that Ukraine only serves a purpose when weakening Russia.  Is that the case now, or for the winter ahead?

If the pro-Ukraine Washington Post can ‘read the political entrails’, so should the EU be able to take note: It is that as Trump most likely returns to centre stage (it seems he may soon announce his 2024 presidential run), the winds will shift direction in Washington:

“I just see a freight train coming, and that is Trump and his operation turning against aid for Ukraine,”, Sen. Chris Murphy said on MSNBC last month. “House Republicans, if they were to take the majority, being preternaturally against anything Joe Biden is for— including the war in Ukraine —  there will be a real crisis as the House Republican majority refuses to support additional aid to Ukraine.”

Michael Hudson: A roadmap to escape the west’s stranglehold