HOME / WORLD / A Progressive ‘Artifice’ of Democratic Impotence: The ‘World’ Finally ‘Gets It’ 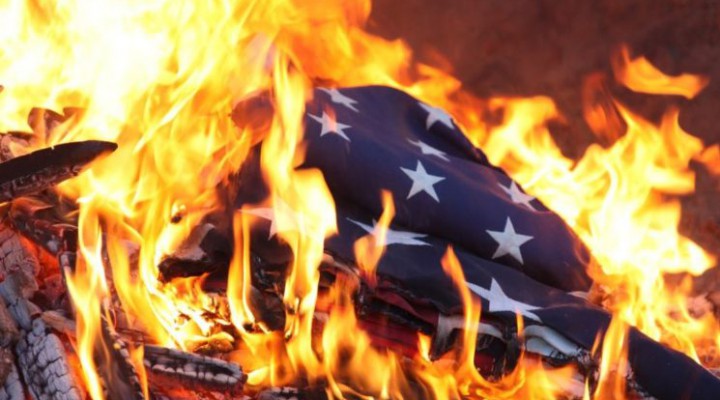 For the first time, an American official has definitively exposed the fact that the US has no vision for the future, and that the US now can only act disruptively in the Middle East.

Antonio Gramsci described an interregnum as a time “when the old is dying and the new cannot be born… in this interregnum a great variety of morbid symptoms pertain.” In such periods, the new is perceived as mad, bad and dangerous to contemplate.

Britain plainly is going through such an interregnum: a period when the élites that previously ‘managed’ political discourse (in Michel Foucault’s words) within strict consensual frontiers, now find that it is being acerbically contested. Such periods are also moments when sanity is lost — when the limits and meaning of what it is reasonable to believe – and do – melt away.

The paradoxes of ‘interregnum’ are also played out daily: when a democratically elected House of Commons arrays itself in opposition to a popular referendum, opposes its own approved legislation that stemmed from it, and even toys with the overthrow of the principle of government ‘governing’, (in favour of the notion that a shifting, ephemeral assembly of non-governmental, cross-party MPs should ‘govern’ instead. Yet this ‘assembly’ still cannot offer an agreed alternative. It is truly bizarre, but not surprising, that there is then, a frisson of real panic evident amongst (perhaps) a majority of Remainers, now facing the shock of finding there is no obvious solution.

A similar type of psychological shock to the cultural Establishment has struck France. As Christopher Guilloy describes: “Now the elites are afraid. For the first time, there is a movement which cannot be controlled through the normal political mechanisms. The gilets jaunes didn’t emerge from the trade unions or the political parties. It cannot be stopped. There is no ‘off’ button. Either the intelligentsia will be forced to properly acknowledge the existence of these people, or they will have to opt for a kind of soft totalitarianism.”

And this week, the Davos Forum has been ruffled by a letter – going viral – from an iconic fund manager and ‘oracle’, Seth Klarman, who sent out a warning shot to clients that a growing sense of political and social divide around the globe may end in economic calamity. “It can’t be business as usual amid constant protests, riots, shutdowns and escalating social tensions,” he wrote, citing the gilets jaunes protests in France, which have been spreading across Europe. “We wonder when investors might take more notice of this”, adding, “Social cohesion is essential for those who have capital to invest”.

The circulation of Klarman’s letter adds to an unease spreading across the globalist Establishment. And at the root of this anxiety, precisely lies the potential unravelling of two great ‘myths’: the monetary myth, and the millenarian myth of the New World Order, which arose out of the carnage of WW1. The notion of heroic, dignified war died too with a generation of young men on the Somme and at Verdun. War was not ‘heroic’ any more. It was just a disgusting meat grinder. Millions had sacrificed themselves for some notion of a ‘sacred’ nation-state. The romance of the 19th century conception of a ‘pure’ nation-state was exploded, and in its stead came the belief (triggered finally, by the fall of the Soviet Union) in the Manifest Destiny of the United States, as the New Jerusalem, that would represent humanity’s best hope for a prosperous, less divisive, more homogenous, cosmopolitan world.

The promise of an easily come-by, ‘prosperity for all’, pulled into being by monetary means (i.e. by massive debt creation) was the corollary to this beckoning, idealistic outcome. Today, no supporting ‘facts’ are any longer needed – the ‘means’ have failed the majority (i.e. the gillets and the ‘deplorables’), and now even the ‘oracle’ Fund Manager, Klarman, is warning the Davos habitués that: “the seeds of the next major financial crisis (or the one after that) may well be found in today’s sovereign debt levels”. He details the way virtually every developed country has taken on mounting debt since the financial crisis in 2008, a trend that he says could lead to a financial panic.

Mr. Klarman is especially worried about debt load in the United States: What it could mean to the dollar’s status as the world’s reserve currency, and how it could ultimately affect the country’s economy. “There is no way to know how much debt is too much, but America will inevitably reach an inflection point whereupon a suddenly more skeptical debt market will refuse to continue to lend to us at rates we can afford,” he wrote. “By the time such a crisis hits, it will likely be too late to get our house in order.”

This monetary artifice was always illusory: The idea that real wealth would emerge out from inflated fiat debt; that such expansion had no boundaries; that all debt could, and must, be honored; and that the debt overhang, was to be solved by – more debt – was never credible. It was a fairytale. It reflected, the secularised belief in the inevitable, upward itinerary of progress; (that resonated with, and derived from the Christian millenarian conviction of the advance towards a plentiful and more peaceful ‘End Time’).

In 2008, the big banks were a day away from collapse. They were rescued by western taxpayers (as the risks of financial failure were judged by the élites to be too great), but then the rescuers (the various host states) themselves had to be ‘bailed’ – so they eviscerated the welfare, safety-net systems of their states, in order to repair their own depleted balance sheets (after having earlier repaired their banks’ balance sheets).

The 60% were hit thrice. Firstly, by the initial bail out; secondly by the austerity that followed; and thirdly by the Central Banks resuming their asset inflating, savings-depleting, policies. Against this grim backdrop, the 60% understood and felt their impotence – but also, they saw that they had nothing to lose. They had no stake in this game.

That ‘narrative’ – of easy credit-led prosperity – has been the western identity/narrative for the world over the last decades. It took an ‘outsider’ however, to trigger what the Washington Post wryly accepted, was the most telling moment at Davos Forum this year – ‘telling’, simply because it was so blindingly obvious: At a panel on how global orders fail, Fang Xinghai, the vice chairman of the Chinese government’s main securities regulator, simply reminded the audience of the shadow side to the western global monetary steamroller: “You have to realize that democracy is not working very well. You need political reforms in your countries.” He added that he meant this “with sincerity.” Ouch! It took a Chinese official to say the unsayable…

Inevitably however, the ‘hurt’ of a collapse of a globally dominant ‘myth’ begins at the periphery. What is sometimes lost is that the élites, particularly in those faux nation-states that were sloughed-off by European colonialism after WW1, not only have defined themselves through the narrative of ‘there is no alternative’ to credit-induced prosperity, but they have also integrated into the cosmopolitan international, élite rich. They are in it, and of it. They have severed from their own cultural roots from which they sprang, yet claim to ‘lead’ in their ‘world’.

An example of this would be the Gulf States: Of course, when ‘Davos’ sneezes, the periphery élites catch pneumonia. And when this identity-crisis is accompanied also by a premonition of a coming financial crisis at the centre too, the pneumonia will be grave. Not surprisingly therefore, anxiety amongst Middle East peripheral élites is spiking. They know that any serious financial crisis at the ‘hub’ would mark their ‘end’.

Here is the point: Mike Pompeo’s address in Cairo was not important for what he said about American policy (nothing). Rather, it may however become understood as a tipping point of a different sort. This was because his address showed that the 30-year New World Order vision was dead. There simply was no vision – no vision at all. It was clear: Pompeo just was verbally fighting another round of America’s civil ‘war’.

And John Bolton effectively confirmed its demise. As America has nothing to offer, it is turning to disruptive tactics (i.e. in sanctioning any businessman or state, which contributes to the reconstruction of Syria). In practice these tactics simply unsettle US allies even more.

Again, another point is being missed: with the élite’s identity/narrative faltering, other cultural-‘spiritual’ forms already have risen to take up the slack. Thus, as Mike Vlahos previously has noted, Middle Eastern states are not weakening, or failing so much, on account of actual physical threats. But because in the stead of mainstream cosmopolitan identity, equally passionate local and universalistic visions have risen up – often in an intricate weave of non-state actors (such as Hizbullah, Hashd al-Shaabi, and the Houthis).

The latter lay their claims not with liberalism, or the consumer and social welfare-driven economies of the developed world, but through reaffirming their society’s particular strength and sovereignty. And in their right to live their lives in their own, (diverse) cultural ways. They flourish where the demand for purpose, and the recovery of values in society, is greatest.

And just as the gillets jaunes are proving so difficult to control through normal political mechanisms, so too these ‘other’ non-state actors have defied control by Middle Eastern state mechanisms using the traditional western toolbox. Soft or hard totalitarianism: neither has been fully effective.

We are speaking here, of a major shift in power – and in the nature of power. For the first time, an American official has definitively exposed the fact that the US has no vision for the future, and that the US now can only act disruptively in the Middle East. Yes, Gulf States have heard the deafening sound of ‘void’. So too, can the states on the other side of the divide – those who were never a part of this New World Order. It is not so hard to guess where the pendulum will come to rest.

0 thoughts on “A Progressive ‘Artifice’ of Democratic Impotence: The ‘World’ Finally ‘Gets It’”