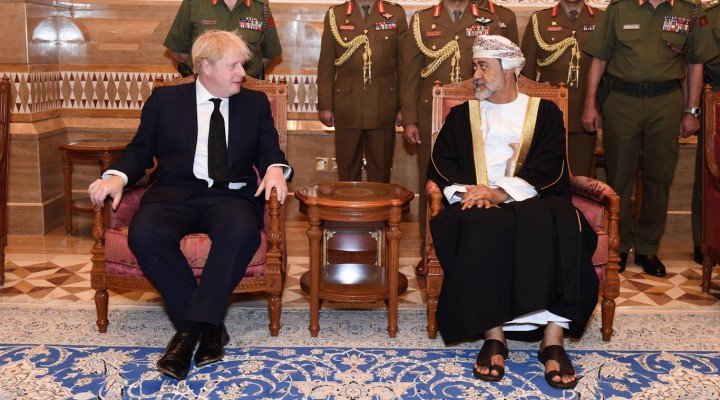 91 British operatives, paid for by the Sultan of Oman, wearing Omani uniforms, but still remaining part of the British military, hold key positions, training and leading local forces to help the monarchy stay in power.

MPN– The United Kingdom keeps dozens of army operatives — “respectable mercenaries” in its own words — to help prop up the Omani dictatorship, a new report from the investigative team at Declassified U.K. has found. Rooted in half a century of covert cooperation between the two countries that receives virtually no public attention, 91 British operatives, paid for by the Sultan of Oman, wearing Omani uniforms, but still remaining part of the British military, hold key positions, training and leading local forces to help the monarchy stay in power.

Prime Minister Boris Johnson has refused to inform parliament on what the rules of engagement are for these secret soldiers, leading to increased speculation, particularly over the roles of the air force pilots in the country flying the 12 extremely costly, British-made Typhoon fighter jets Oman purchased in 2012 for 3.75 billion U.S. Dollars. Neither Britain’s Royal Air Force nor arms manufacturer BAE Systems would tell investigative journalist Phil Miller, who broke the story, if the pilots were contracted to fly the planes at times of conflict.

In 2019 the United Kingdom overtook Russia to become the world’s second largest arms exporter, capturing around 19 percent of all international sales. After Johnson defeated Labour’s Jeremy Corbyn in the December general election, shares of British weapons manufacturers rocketed on the expectation of increased sales. Corbyn, a lifelong anti-war activist, had promised to halt arms transfers to Middle Eastern dictatorships, the destination for nearly 80 percent of British arms sales. According to data from the Campaign Against the Arms Trade, Oman is the United Kingdom’s third largest customer, behind only Saudi Arabia and the United States, buying $1.5 billion worth of hardware since January 2017. Considering its tiny population of under 5 million people, however, the country is by far the most loyal customer London has. Aircraft, including drones, are the number one purchase, in terms of value, followed by small arms and ammunition.

Scottish journalist Adam Ramsay has described Oman as, “effectively, although not formally, part of the British Empire,” suggesting that in any future offensive against Iran, the country would play an “absolutely vital role” in it, (even though the two states have maintained cordial relations). Situated just across the Strait of Hormuz from Iran, Oman is home to both U.S. and U.K. military sites, including newly built army and navy bases.

The neocolonial relationship between the two nations stretches back at least 50 years. In 1970, Sultan Qaboos bin Said Al Said came to the throne in a British-backed coup. Qaboos was very much Britain’s man, having grown up and been educated in England. Entering the Royal Military Academy at Sandhurst at age 20, he even served in the British Army for a year. With the help of U.K. special forces, he managed to suppress a socialist uprising in the southern region of Dhofar. He would go on to rule with an iron fist for 50 years until his death in January this year when flags across Britain were lowered to half mast in mourning. In their obituary, The Guardian, the outlet marking the left-wing extreme of the U.K. corporate press, described him as a “relatively benevolent and popular absolute monarch,” who transformed his country for the better.

Qaboos also used his British weaponry to violently suppress the 2011 Arab Spring in his country, sending troops in to fire live ammunition at demonstrators. To this day, public gatherings of 10 or more people remain prohibited. The U.K. government immediately expressed its concern – not at the suppression of human rights, but that they might lose a valuable client ruler. Prime Minister David Cameron rushed to the Middle East, offering new shipments of weapons. Since then, the sultan’s newly bolstered police and military received anti-riot training in the U.K.

In discussions of problematic regimes that abuse human rights, Oman is almost never brought up, precisely because, in the eyes of the West, it is behaving itself, making the world safe for Western oil companies. To many in Washington, D.C. and London, they are the only ones whose rights matter.