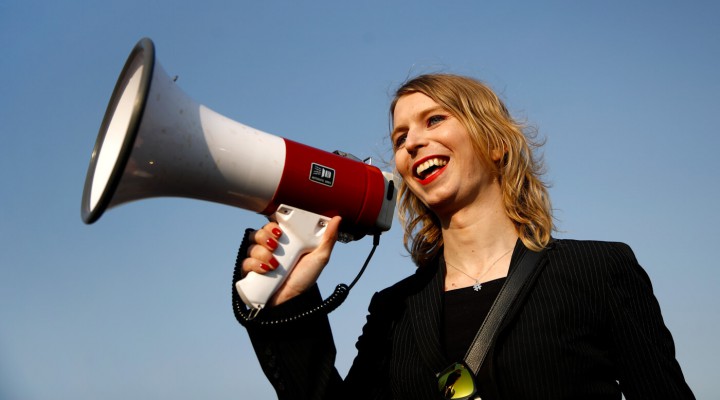 Almost nine in 10 young trans people have considered suicide, according to LGBT charity Stonewall. Chelsea Manning is no exception, having attempted multiple times to take her own life.

MPN– March 31 marked the International Transgender Day of Visibility and many senior political figures, including those battling for the Democratic nomination for president, released positive, inclusive statements affirming their commitment to supporting the transgender community. Senator Elizabeth Warren (D-MA) announced “I want every trans person to know: You are valued. You are equal. You are loved.”

As we recognize #TransDayOfVisibility, let's recommit to fighting for a country where no one faces discrimination because of who they are. And that means passing the Equality Act in Congress so that sexual orientation & gender identity are protected under the Civil Rights Act.

Sen. Amy Klobuchar (D-MN) claimed she “will always stand up for the rights of trans Americans.” Sen. Cory Booker (D-NJ) said he stood with his “transgender brothers and sisters … united against hate,” while Sen Bernie Sanders (I-VT) displayed the transgender flag outside his office in Washington.

As we recognize #TransDayOfVisibility, let's recommit to fighting for a country where no one faces discrimination because of who they are. And that means passing the Equality Act in Congress so that sexual orientation & gender identity are protected under the Civil Rights Act.

its chelsea 🤔 @SenKamalaHarris never supported me 😳 she stands for the fascist police state you love so much 🔫👮‍♀️🚔 you are the same 🌈💕😎 https://t.co/TGg99IN8Cr

Despite all this, none of the Democratic hopefuls — nor well known politicians like Nancy Pelosi, Justin Trudeau or Hillary Clinton — chose to mention one of America’s most famous, visible transgender people, Chelsea Manning, who recently made headlines after being sent back to prison for her refusal to testify before a secret court against WikiLeaks founder Julian Assange.

Beto O’Rourke even specifically mentioned trans people in the military, addressing all “past, current and future transgender service members who put their lives on the line for our country” and letting them know that he appreciates them and will fight to see them welcomed and honored. But Manning’s name remained unspoken by anyone in power.

On #TransDayOfVisibility, let's send a clear signal to our past, current, and future transgender service members who put their lives on the line for our country. We see you, we appreciate you, and we will fight to ensure your service is honored and welcomed.

Manning was subpoenaed in early March before a grand jury investigating WikiLeaks. She refused to testify on ethical grounds, explaining, “I will not participate in a secret process that I morally object to, particularly one that has been used to entrap and persecute activists for protected political speech.” She was found in contempt of court and sent to jail. She is kept in solitary confinement 22 hours a day, something that was described by a supporter as a “vindictive unconscionable attack” on a “truth teller.”

Cruel treatment for a polarizing figure

Manning shot to international prominence in 2010 when it was revealed she had leaked to WikiLeaks hundreds of thousands of sensitive documents pertaining to U.S. war crimes, including murder and torture. The material sparked international outrage and a discussion over the U.S. role in the Middle East and the world. Manning had been working as an intelligence analyst in the U.S. Army.

In 2010 Manning was arrested, court-martialed, imprisoned and kept naked in solitary confinement. She was sentenced to 35 years in prison for exposing U.S. secrets to the world. President Barack Obama, however, commuted her sentence and she was released in 2017. This new imprisonment constitutes “a roundabout method to further punish Chelsea for her past actions, adding to the seven years of trauma, imprisonment and torture she has already endured,” according to her support committee, Chelsea Resists.

Solitary confinement is considered a form of torture by most countries, and the United Nations Special Rapporteur described her treatment as “cruel and inhuman” torture. Manning’s actions sparked a great controversy in the United States and across the world, and she is a polarizing figure. Popular Internet TV host Kyle Kulinski supported her, claiming,

Chelsea Manning exposed your government committing war crimes and laughing about it, with your money and in your name — because she has a strong moral compass. And she’s paid a savage and vicious price ever since.”

However, President Donald Trump described her as an “ungrateful traitor” who “should never have been released from prison.”

The United States holds nearly a quarter of the world’s prison population and the large majority of people in local jails have not been convicted of any crime. Transgender people are often forced to the margins of society and are more likely to end up in prison. Both inside and outside prison, transgender people face far higher levels of physical and sexual violence. Almost nine in 10 young trans people have considered suicide, according to LGBT charity Stonewall. Manning is no exception, having attempted multiple times to take her own life.

The ACLU notes that deadly violence against the trans community is on the rise, with the number of trans and non-binary people murdered hitting record highs. One survey found that one in four transgender people had been assaulted owing to their identity.

Transgender Day of Visibility was started in 2009 to raise awareness of these issues that trans people face. Politicians appear keen to associate themselves with the movement but have been much less forthcoming in talking about America’s most famous incarcerated transgender activist, who exposed the crimes of the U.S. military.