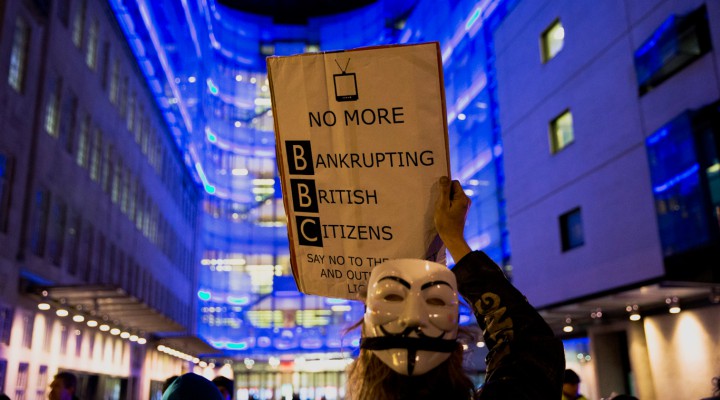 The BBC has responded to criticism over its coverage of the UK’s general election by calling for their online critics to be banned from social media.

MPN– In the face of a mountain of condemnation over how it provided a key role in helping Boris Johnson win last week’s UK general elections, BBC Director-General Baron Hall of Birkenhead has called for the corporation’s critics to be purged from the internet.

“The conspiracy theories that abound are frustrating…some of the abuse…is sickening. It shouldn’t happen. And I think it’s something social media platforms really need to do more about” he complained. Other BBC employees, who refused to name themselves, also expressed their exasperation to The Guardian over what they called “ludicrous Twitter storms” over “minor errors” in their reporting making it “really tough” working for the corporation.

The BBC is by far the most influential news outlet in the United Kingdom. According to the Media Reform Coalition, its channels account for around 75 percent of all TV news by market share and the company controls over half of the nation’s radio audience. BBC.co.uk is also the number one most visited British media website.

At no point did anyone quoted in the Guardian article accept that the BBC’s coverage of the recent election was anything other than exemplary, a common sentiment among top BBC employees. Veteran news anchor Huw Edwards, for example, described the idea that the organization was biased against Labour as “risible.”

Explain again, Mark. Slowly. With your ‘academic and other analysis’. How does an organisation direct thousands of its staff to work in unison to back one political cause? I know you need to tell yourself this stuff, but it’s risible. 🏴󠁧󠁢󠁷󠁬󠁳󠁿 https://t.co/KLqUPB6CVq

Baron Hall singled out the criticism of BBC Political Editor Laura Kuenssberg – herself a descendant of the German aristocracy – as particularly unpleasant. “Elections always put the BBC’s impartiality in the spotlight. Social media offers a megaphone to those who want to attack us and makes this pressure greater than ever,” he said.

Yet Kuenssberg has been carrying out a sustained, non-stop attack on Labour since Jeremy Corbyn was elected its leader in 2015. A report from the BBC’s own trust concluded that she was so biased that she breached company regulations, an extraordinary finding from the corporation’s own foundation.

Kuenssberg also flouted strict election laws to reveal, while voting was still open, that postal ballots showed an enormous conservative majority was looming, thereby influencing the election. The UK Electoral Commission is currently investigating her. She also reported fake news in the run-up to the election, claiming that a Labour activist had punched a Conservative advisor visiting a hospital. What makes this particularly insidious is that this was part of a coordinated Tory propaganda campaign to divert attention away from the viral news that a four-year-old child had been pictured being treated on the floor of the underfunded and overcrowded hospital, sleeping, while hooked up to machines, on a pile of old coats rather than a bed. The Conservative government is currently in the process of privatizing the National Health Service.

Few of the BBC’s 300 million users are aware that the corporation’s genesis lay in helping the Tory government crush the 1926 general strike that threatened to bring about a socialist revolution to the UK. According to media historian Tom Mills, the BBC became a “vital instrument of propaganda for a government determined to break the strike.” putting out non-stop state propaganda and banning the Labour Party from the airwaves. As the strike was broken, the BBC reported on the “nation’s happy escape.” Its Director-General at the time said that the BBC had “saved” the UK and that if Louis the Sixteenth had had a national broadcaster, the French Revolution would never have happened.

During the 1980s, the BBC put out round-the-clock propaganda for Conservative Prime Minister Margaret Thatcher in her war against the miners’ strike, doctoring footage to make it seem like miners had attacked the police, when, in fact, it had been the other way around. The failure of the miners’ strike led to the complete re-organization of the UK along neoliberal lines and the end of centuries of industrialization and increases in living standards.

More recently, the BBC proved crucial in propagandizing the public during the Iraq War and the Scottish independence referendum. The BBC’s bias has also spurred a rich tradition of academic critique. Yet those same academics are now facing suspension from social media if Baron Hall gets his way.

A Chilling Blow for Free Speech

The purging of dissent of the corporate state is something MintPress News has covered in depth. While few progressives shed tears at the news that a number of media giants like YouTube, Facebook, Spotify and Pinterest all took the seemingly coordinated decision to ban notorious radio show host and Infowars founder Alex Jones from their platforms, the precedent that it set was immediately used to silence more genuine independent voices. Facebook shut down the pages of Occupy London, the Black Agenda Report and Venezuelanalysis. Others, such as Venezuelan President Nicolas Maduro and the Ron Paul Institute’s Daniel McAdams were banned from Twitter for trivial reasons.

Furthermore, media giants have, under the guise of fighting hate speech and fake news, attempted to tighten the corporate grip over the means of communication by changing their algorithms to promote official sources like CNN, Fox News and the BBC and demoting, de-ranking or simply deleting alternative media such as MintPress News. As a result, alternative media have seen their traffic, and therefore their influence and income plummet.

Studies have shown that a majority of the world’s population does not trust the media. One survey found that around three-quarters of Americans believe mainstream media intentionally prints false or highly misleading stories for financial or political gain. Yet even as mainstream bias is becoming more evident, those same outlets are calling for the silencing of any criticism of them, good faith or otherwise.

What an upside-down world we live in where an affable pacifist vegetarian like Jeremy Corbyn was turned into a bloodthirsty tyrannical terrorist and where those calling loudest for top-down censorship of speech are precisely journalists working for the West’s most prestigious media outlets.

Feature photo | An Anonymous supporter holds up an anti-BBC placard to protest the BBC and bias in its reporting at the BBC offices in central London, Dec. 23, 2014. Matt Dunham | AP