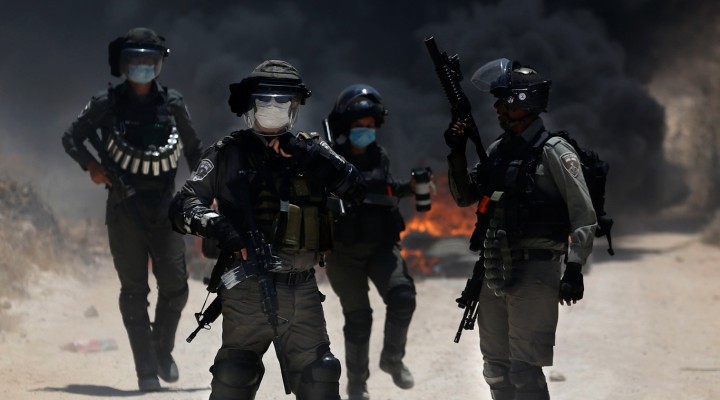 “This shows clearly that Israel doesn’t care about Palestinian lives…They can’t even give us our basic rights to healthcare so we can treat our people from the coronavirus.” –Tayseer Abu Sneineh, Mayor of Hebron

MPN– The Israeli decision to bulldoze a newly built COVID-19 field hospital and testing center in Hebron in the West Bank yesterday has been roundly condemned by activists, rights groups and organizers. “Because demolishing a COVID-19 testing center is totally the best way for Israel to be spending funds right now,” wrote female-led antiwar group CODEPINK, “Seriously, this obsession with destroying Palestine, even at the expense of Israeli coronavirus funding, is sick.”

Around $250,000 had been raised to fund the new center, which was being built in the memory of the grandfather of 35-year-old engineer Raed Maswadeh, whose family donated the land for that purpose. Masawadeh’s grandfather had recently died from the coronavirus himself. Maswadeh told journalists from Middle East Eye that Israeli soldiers had been watching its construction for months without saying anything. Then, last week they were told to produce building permits for the field hospital (something virtually impossible to receive from the Israeli government), otherwise, it would be destroyed.

Tayseer Abu Sneineh, mayor of Hebron, was outraged. “We are in the midst of a global crisis…This is an emergency situation, you would think they would show some empathy, or give people some leeway, but they are not interested in that,” he said. “This shows clearly that Israel doesn’t care about Palestinian lives…They can’t even give us our basic rights to healthcare so we can treat our people from the coronavirus.”

The lack of a response from Western governments angered many. Ali Abunimah, co-founder of the Electronic Intifada, complained that there was “not a word” from the European Union on the bulldozing of the emergency hospital. “Do not let the EU launder its complicity and support for Israeli war crimes with crumbs of charity thrown at Palestinians,” he added.

The coronavirus situation in the region appears to be spiraling out of control. Having seemingly successfully managed the outbreak, Israel has unmistakably hit a second wave of infections, far worse than what had come before. At the height of the epidemic in early April, the country was averaging around 600 new cases per day. Yesterday, 2,039 Israelis tested positive for the coronavirus. Palestine is similarly losing its grip on the situation; with 57 of a total of 64 deceased Palestinians dying in July. Yesterday, Nickolay Mladenov, the United Nations’ Special Coordinator for the Middle East Peace Process, warned that the dramatic increase in cases could have perilous consequences for the region, calling for new, “extraordinary measures” to fight the virus’ spread. The destruction of health clinics was presumably exactly the opposite of what he intended.

While perhaps shocking, Israel’s latest move did not surprise many knowledgeable onlookers. In March, Israeli forces did the same thing to a new field hospital in the West Bank community of Khirbet Ibziq, bulldozing buildings and confiscating medical supplies and construction materials. “As the whole world battles an unprecedented and paralyzing healthcare crisis, Israel’s military is devoting time and resources to harassing the most vulnerable Palestinian communities in the West Bank, that Israel has attempted to drive out of the area for decades,” wrote local human rights group B’Tselem, “Shutting down a first-aid community initiative during a health crisis is an especially cruel example of the regular abuse inflicted on these communities, and it goes against basic human and humanitarian principles during an emergency.”

Benjamin Netanyahu’s government recently announced plans to formally annex up to a third of Palestine, including much of the fertile Jordan Valley, the breadbasket of Palestine. Based on Trump and his son-in-law Jared Kushner’s so-called Deal of the Century, the plan would put over 70,000 extra Palestinians under full Israeli jurisdiction. The United Nations’ High Commissioner on Human Rights, Michelle Bachelet, has declared the annexation plans both “illegal” and “disastrous.” Dr. Ramzy Baroud, a Palestinian-American journalist recently told MintPress that people in the West Bank are “already under complete Israeli control and all movement and all freedoms are already curtailed for Palestinians,” but that the Trump-Netanyahu plan would make the situation even worse. “It will be the last nail in the coffin in the so-called peace process,” he warned.