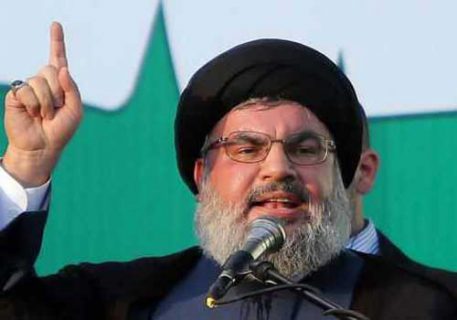 The UK government’s bid to ban the Hezbollah movement in its entirety – political and military wings alike – and brand it as a terrorist organisation cannot be viewed in isolation from US and Israeli attempts to mobilise for war, be it hot or cold, against Iran. That mobilisation has been relentless in recent weeks on both the regional and international levels.

Britain’s right-wing Conservative government broke with longstanding EU policy when it declared it would henceforth treat Hezbollah’s military and political wings as one and the same. Home Secretary Sajid Javid announced that the existing ban on the military wing will now be applied to the political wing too, and the entire organisation will be proscribed.

This step was taken in response to US and Israeli pressure, and it was no surprise that among the first to applaud it was Israeli Public Security Minister Gilad Erdan. He urged other European countries to follow suit, and we should not be surprised if Donald Trump soon issues a Tweet saying the same thing.

It was the British government that first came up with the idea of distinguishing between the political and military wings of resistance movements. It only banned the military wing of the Irish Republican Army (IRA) when it was fighting for the unification of Ireland. But its latest move breaks with that concept, illustrating how double standards are applied to Arabs and Muslims, and especially to the Arab-Israeli conflict.

Hezbollah has grown accustomed to moves such as these, and we doubt the party will be much affected by the UK’s decision. It has been living for decades under siege by the US, Israel and various Arab regimes, and has adapted to all the difficulties that cause with regard to making financial transfers and receiving donations from supporters abroad. Moreover, Hezbollah does not possess deposits in Western banks in its name or those of its leaders that could be sequestered.

Hezbollah has never carried out any military action against British interests, either at home or abroad. The British decision is more damaging to the UK itself than to the Lebanese party, maybe not immediately but perhaps in the longer term. It closes down all channels of communication when previously, Foreign Office officials would invite Hezbollah interlocutors to visit Britain to exchange views on political, security and other issues.

The British move would have been understandable if a Hezbollah cell had been caught carrying out or planning a terrorist action in or against the UK. But when it is made purely in response to the US and Israeli incitement, that reflects a woeful lack of insight into the possible future consequences, including for Britain’s own security and interests. Nowhere in the world are future developments as unpredictable as they are in the Middle East.

It is not Hezbollah that threatens the Middle East’s stability, but Israel, with its continuing occupation of Palestinian land, its thwarting of any peace process, and its successive bloody wars and on-going war crimes, especially in South Lebanon, the Gaza Strip and Syria.

Hezbollah is a legitimate resistance movement against Israeli occupation, which has usurped Lebanese, Syrian and Palestinian territory. It will remain so, and the British ban is unlikely to fare better than the US ban or change that reality.

The ban reflects Britain’s current state of political chaos and the weakness of its government, which is utterly in thrall to Israel’s pressure lobbies, whether in the UK or US. This is regrettable in every sense of the word.