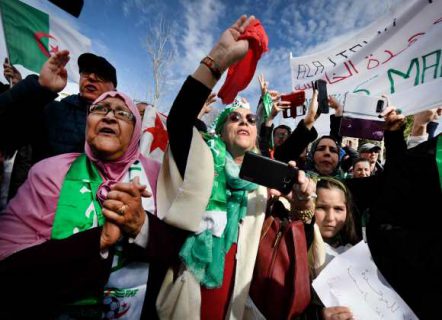 A process of change has begun, and the last thing Algerians need or want is foreign interference

When French ‘philosopher’ Bernard-Henri Lévy calls on the Algerian people to hold further protests in order to bring down the regime in its entirety and declares that “the revolution is only halfway there”, we should be wary. Coming from the man known by some as ‘godfather’ of the Arab Spring revolutions, his appeal amounts to ‘non-innocent’ interference in Algerian domestic affairs and comes at a calculated moment. It discredits the revolution and seeks to distort it, and to sow seeds of dissension in the country in order to destabilize it, and ultimately lead to bloody anarchy that serves the aspirations of those on whose behalf he speaks.

The Algerian popular protest movement has demonstrated an admirable degree of self-discipline and national responsibility in the face of attempts to exploit it to target the country and its territorial and demographic unity. Algerians do not need Lévy’s advice. Their protests have been completely peaceful, steered clear of destructive political, sectional or ethnic ideologies, risen above anything that might divide Algerians, and adhered to an inclusive national identity.

The Algerian people are particularly sensitive and opposed to any form of foreign interference in their affairs, especially if it comes from the former colonial power France or the new colonial power in the United States. They view any Algerian bolstered by foreign support as an ‘agent’ or ‘implant’ who wants no good for the country, however much they may hide behind slogans about democracy, liberty and human rights – important though these values are.

At the start of the Libyan revolution, when it was a purely peaceful expression of legitimate popular demands, most Algerians supported it. But the moment NATO warplanes intervened, at the instigation of France and Britain and under the leadership of the US, their view changed completely. This was not out of support for the Libyan regime, but apprehension and suspicion about the motives and objectives of this hostile trio, which views the Arab World through Israeli eyes and neo-colonial lenses.

Lévy later boasted publicly that it was his commitment to Zionism and the interests of the State of Israel that prompted him to lobby for the arming of the Libyan rebels and NATO intervention. He said he wanted to see a new government in Libya be the first to open an embassy in occupied Jerusalem. His appeal to Algerians is unlikely to have been entirely based on a desire to support the stability, development and progress of their country. French and British documents have revealed that the principal reason Nicolas Sarkozy and his stooge David Cameron – and their unofficial advisors Tony Blair and Lévy – intervened in Libya was to punish its leader Muammar al-Qadhafi for resisting neo-colonial hegemony in Africa. Among other things, he was determined to sponsor the creation of an African Dinar as an alternative to the Euro and the US Dollar in order to achieve economic independence and had set aside tens of tons of gold to back the new currency.

Yes, we do believe in conspiracy theories and make no secret of that, because our region has been ravaged by conspiracies hatched against Iraq, Libya, Yemen and Syria. At the same time, it is imperative that these conspiracies are confronted in an alert, wise and responsible manner. The Algerian people have set us all an example in this regard.

Algerians took to the streets in massive numbers not to insult or humiliate President Abdelaziz Bouteflika or take revenge against him, but to reject a fifth term and bring down his corrupt entourage. Its members wanted to use him as a facade to continue running the country in accordance with their interests, with no regard for the people and while sidelining them and the groups that actively speak for them.

Now, the Algerian state is responsibly going through a process of reawakening. It has acted to put an end to this farce and compelled Bouteflika, or those ruling in his name, to concede to the people’s legitimate demands. It has made fundamental ‘reappraisals, including withdrawal of Bouteflika’s nomination, postponement of the elections for a short while which we hope will not end up being prolonged, and the formation of an independent national dialogue committee and election commission for a limited transitional period.

There are fears in some quarters that these ‘reappraisals’ are merely an attempt to circumvent the popular protest movement and its demands by prolonging the fourth term for a year or more and rob it of its victory. These were voiced among others by the iconic liberation war veteran Djamila Bouheired. Some even accused veteran diplomat Lakhdar Brahimi, who is to head the ‘Independent National Forum’, of being  ‘another Mohamed Elbaradei’ in reference to the Egyptian experience. These fears are understandable and indeed legitimate. But the real guarantee against a repeat of the Egyptian experience or any similar scenario is the popular protest movement itself, which could easily take to the streets again to confront any deviation. Many Algerians nevertheless see the army as a ‘safety net’ – as in many Third World countries like Pakistan and Egypt, and even in Russia, China and Venezuela. It cannot, and must not, allow a descent into chaos that turns Algeria into a ‘failed state’ as is happening in Libya. But it must also, categorically, remain in its barracks. The only route towards stability and progress is via a civic democratic state.

It is commendable that the Algerian state and its institutions have listened, and then responded, to the legitimate popular demands for change. Given the horrific experience of the 1990s, it cannot and must not stop half-way, but continue siding with the people who are the source of all authority.

Algeria has been a spearhead in confronting colonial ventures in the Arab World and throughout Africa. It participated in all the Arab-Israeli wars with men, money and arms. And it resisted incessant US pressure to destroy OPEC and control crude oil prices to serve Western economies rather than the peoples of the poor producing countries. This is why some are attempting to divert the popular protest movement from its goals and push the country into bloody confrontations. We do not exclude Lévy and Macron’s French government from this list.

Now that the popular protest movement has achieved some, though by no means all, of its objectives, serious and responsible national dialogue is the way to get to transparent, free and fair elections. These can generate a new leadership capable of achieving national accord, uprooting corruption, promoting genuine development and putting the country back in the place it deserves on the regional and world stages.

We are confident that Algeria can overcome this crisis and recover, and regain and even exceed its former strength.

0 thoughts on “Hands Off Algeria”