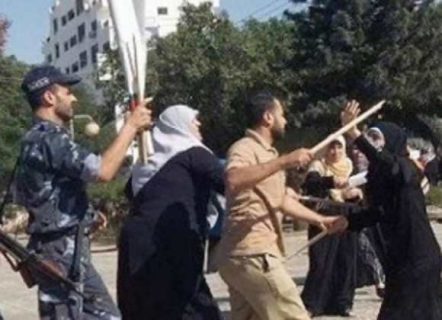 There is indeed a conspiracy to destabilize Gaza, but that’s no excuse to beat up protestors

There can be no question that the Hamas movement has made mistakes in Gaza. It has run the Strip in a partisan and factional manner, appealing to its loyalists and alienating opponents of its rule or even neutrals. It has thereby created a long line of adversaries: It begins inside Gaza with local opponents from the Fateh movement and some radical Islamic groups that oppose pacification; passes through Ramallah where the Palestinian Authority (PA) wants to regain the Gaza Strip on its own terms, foremost of which is disarming the resistance; and ends in Tel Aviv where the Israeli occupation state is increasingly troubled by Gaza’s armed resistance, missiles and mass protest marches.

Despite all these challenges, there can be no justification for the ugly, insulting and brutal way in which Hamas’ police dealt with demonstrators when they sought to express their anger at deteriorating living conditions in the Gaza Strip. They used purely peaceful means to protest against the taxes that burden them, the inflation that makes it almost impossible to live, and most importantly the youth unemployment rate that is running at 60% or higher, and has prompted may to take to the sea and risk their lives trying to migrate.

Hamas is right to say it is facing a multi-faceted conspiracy aimed at foiling its rule in Gaza by destabilising the Strip and detonating it from within. PA President Mahmoud Abbas and his aides make no secret of their intention to achieve that goal by tightening the squeeze on Gaza Strip residents. That is why they cut off the salaries of public servants – Fateh supporters included – and forced thousands into early retirement, and stopped paying the fuel bill for the Strip’s only power station. Israel — facing increasingly effective missiles, incendiary balloons and kites, Marches of Return, and growing damage to its international reputation – is naturally the lead conspirator.

Whenever I used to call relatives or friends in the Gaza Strip, of whatever political persuasion, they would complain of hard times and difficulty making ends meet. But they would all, even Fateh supporters, agree on one thing: that Hamas had brought security and safety and ended the anarchy that prevailed before it took power in its famous 2007 coup.

The Gaza Strip is not Algeria, Libya or even impoverished Sudan. It has no oil or gas wells, no agriculture, no industry and even no water. What it has are more than two million souls, the majority in refugee camps, enclosed in a big prison less than 150 square kilometres in area. There are bigger public parks in some European countries. But this prison has no trees, or very few, because of the density of its cement housing.

It must be conceded that Hamas is subject to a suffocating financial siege that has left it broke. It can no longer pay the salaries, or even a quarter of the salaries, of its employees or members of its security forces or military wing. It is natural that this painful situation should impact on the general population of the Gaza Strip, where all have become equal in poverty, hunger, need and suffering.

But this cannot excuse the Hamas police brutally beating protestors, women and young people included, with canes. These are the children, siblings and cousins of the Qassam Brigade resistance fighters, the participants in the March of Return protests, the martyrs killed by Israeli troops, and the thousands of injured and maimed.

Hamas’ police should have behaved like the Algerian police who respected the people’s right to protest and avoided clashing with demonstrators. The vast majority of people in the Gaza Strip lack electricity, food or medicine. Leave them to cry out in pain, or is crying prohibited too? It is to be hoped that level-headed people in Gaza, and specifically within Hamas, act to punish everyone involved in attacking the demonstrators and apologise to the victims. That is the only way to address the outrage and block the way to all those conspirators.

Hamas’ leaders and members must appreciate that they are surrounded by enemies who do not want their movement to survive and are intent on uprooting it, and that its popular base is its only and final resort. If it loses that base, Hamas stands to lose everything, as does the Palestinian cause, at least for the present time.