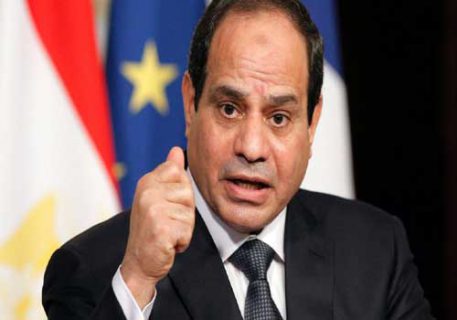 It is hard to understand the uproar currently being raised in some Egyptian circles, both inside and outside Egypt, over the constitutional amendments enabling President Abdelfattah as-Sisi to remain in power until 2034. It’s not as though the parliament that voted for them was itself elected in a transparent and democratic manner. It is composed entirely of the president’s supporters, with the exception of 16 members of what claims to be an ‘opposition’ party out of a total of some 600 MPs. Moreover, the outcome of the popular referendum to endorse these amendments two months from now is already known, not to say that the proportion of votes in favour has already been determined.

Sisi represents the Egyptian military establishment that ousted President Hosni Mubarak and went on to destroy the democratic process and overthrow President Mohammad Mursi, who was elected in July 2013. It established a ‘military monarchy’ that now rules the country and its people and wields an iron grip over all state institutions and resources, allowing no competitor. Anyone who opposes it and whose opposition is deemed a threat belongs behind bars, if not on the hangman’s gallows.

It was no coincidence that these amendments – the most important of which enshrines the Egyptian army’s role in ‘protecting the constitution and democracy’ – came only days after the anniversary of the 25 January 2011 revolution that brought down Mubarak’s corrupt and dictatorial regime. The timing was deliberate and was intended to bury this great popular revolution and its democratic legacy.

Sisi’s supporters say that extending his term till 2034 is necessary to give him more time to realise the economic development plans he has initiated and to ensure Egypt’s stability in the face of numerous security threats in a turbulent region. His opponents say it will transform Egypt into a military dictatorship and terminate all democratic freedoms, including the peaceful transfer of power via the ballot box in transparent elections.

There are other amendments too, of course, such as the abolition of the Supreme Media Council and Supreme Press Council. But where are the media, and where is the press, when Egypt ranks 105thon  Transparency International’s freedoms index? The same can be said about the clause that establishes a Senate with 250 members, a third of whom will be appointed by the president. That will make it a mere clone of the existing, token, parliament.

By concentrating all powers in his hands, Sisi is emulating elements of the Chinese model, such as the abolition of term limits for President Xi Jinping. But China’ president and ruling party have transformed their country into a superpower, with the world’s second strongest economy after the US – expected to leap to first place within five years. So, will Sisi achieve something similar for Egypt and restore it to its vanguard leadership role in the Middle East and the world? This question is hypothetical and premature, but many are highly dubious about the prospect, not least Sisi’s vast number of Egyptian opponents.

Sisi’s confidants whisper that security and stability take precedence over everything else for him and his agenda, and that includes democracy, as economic development cannot be achieved against a backdrop of anarchy and terrorism. But it is easy to refute such claims. Most countries around the world that have developed into economic ‘tigers’ have done so via the gateway of democracy and freedom – most obviously Malaysia and Indonesia, to say nothing of the Western states.

The renowned journalist the late Muhammad Hassanein Heikal, who was initially one of Sisi’s most prominent supporters, affirmed at a private gathering in Beirut a few months before his death that the Egyptian army will not allow anyone but itself to rule Egypt, and specifically through a military officer, whether he dons uniform or a civilian suit. The reason the military establishment unseated Mubarak was that, in his later years, he succumbed to pressure from his wife to groom their son Gamal for the succession, granting him and his cronies extensive powers and making him the country’s de facto ruler.

What happened then and is still happening today confirms the truth of Heikal’s prediction. A ‘military monarchy’ is now consolidating its hold over Egypt. Sisi will remain in power not only until 2034 but for as long as he remains alive and retains the army’s support. To do that, he will have to amend the constitution again, but that will only take him a few seconds. Unless, of course, some miracle occurs, though we are confident that this is not the age of miracles.