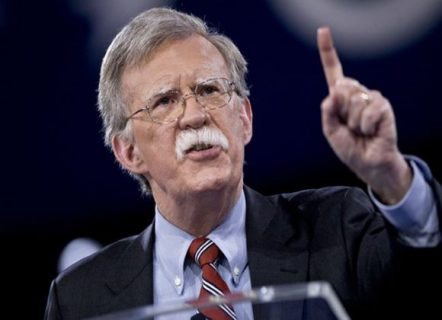 Is Trump’s sacking of his ultra-hawkish advisor cause for hope?

John Bolton left his post as US National Security Advisor without fulfilling any of his dreams: to celebrate a change of regime in Tehran with the Iranian opposition as he promised it last year; to make Juan Guido president of Venezuela instead of Nicolas Maduro; to bomb the North Korean capital Pyongyang; to reduce Lebanon to rubble; and much else besides.

Many will have been distressed to hear Tuesday’s news that Bolton was sacked. Chief among these are Israeli Prime Minister Benjamin Netanyahu and some Arab Gulf leaders, especially in Saudi Arabia and the UAE. They had been counting on him to steer the administration towards a devastating military showdown with Iran that would lead to the downfall of its regime and to install a new one whose first priority would be to open an Israeli embassy in Tehran.

Bolton, who was appointed to the White House because of his extreme anti-Arab and anti-Muslim view, as opposed to the withdrawal of any US forces from Afghanistan, Iraq or Syria. He was constantly inciting Trump to use more military force against the three countries and other perceived US adversaries, and even to employ tactical nuclear weapons in the case of Iran.

It seems disingenuous for Trump to say that he sacked his advisor due to policy differences over a number of issues. The reason he was appointed to this important position in the first place was his hard-line stance on almost every pressing issue, especially Iran, North Korea and Venezuela. The most logical explanation for this about-turn is that Bolton out-lived his usefulness for Trump. He wanted to use him as a bogeyman to frighten his opponents into submission. But when that trick did not work – i.e. Iran, Venezuela and North Korea did not fall to their knees and raise white flags of surrender after the imposition of draconian US economic sanctions – his role became redundant. So he was unceremoniously dumped, as others have been before him.

Trump keeps threatening war but has no real stomach for it. He believes he can browbeat his adversaries into giving him what he wants in negotiations, treating international affairs the same as real estate deals. Hence his eagerness for face-to-face meetings with the leaders of North Korea and Iran. The former met him twice but did not yield, and the latter has not granted him the honour of an audience, at least not yet. Might Bolton’s departure possibly facilitate the holding of a much-talked-about US-Iranian summit on the sidelines of the UN General Assembly in New York later this month?

The last straw for Bolton may have been the talks held by Trump’s representative Zalmay Khalilzad in Doha over the past eight months with the Afghan Taliban. They ended with the Taliban obtaining most of what they wanted without making any important concessions in return. Bolton was opposed to any negotiations with the Taliban and any withdrawal of US troops from Afghanistan, not to mention the aborted ‘secret summit’ that was due to be held at Camp David on Sunday.

Some analysts suggest Bolton’s departure may have had less to do with policy differences than a clash of egos. Trump may have resented Bolton’s growing public prominence, and the image he projected as the real driver of the administration’s foreign policy. Perhaps. Details of what led to the move will doubtless leak out over the next few days.

In the meantime, it might be safe to say that the prospect of war with Iran has receded considerably, the cheer-leaders for such a war will be going into mourning, and Iran’s leaders may rest a little easier.