HOME / WORLD / Baghdadi is Back 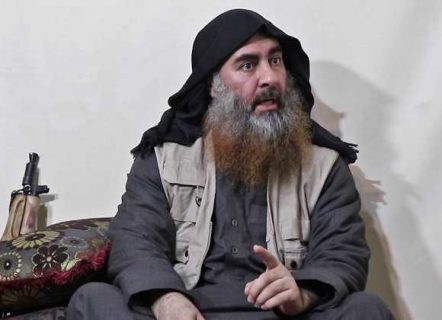 Abu-Bakr al-Baghdadi has only appeared on audio-visual recordings twice. The first time was in July 2014 when he proclaimed the establishment of his ‘Caliphate’ state from the pulpit of the Grand Nouri Mosque in Mosul. The second, and perhaps not last, time was this week when he resurfaced in a high-quality 18-minute video to declare that he was alive and well, and that the caliphate state has ceased to exist in its previous form.

Baghdadi’s emulation of Osama Bin-Laden as a role-model – whether by seating himself on the ground with a Kalashnikov by his side or by tingeing his beard with Henna — is telling. It indicates that he intends to inaugurate a new phase featuring terrorist attacks in different parts of the world, i.e. to revert to the path of al-Qaeda which he abandoned when he sought to set up the ‘Caliphate’ state as an alternative.

The re-emergence of the Islamic State (IS) leader came as a surprise to many people in the West and the Arab world alike, given the many previous news reports claiming he had been killed. Western intelligence services have been analysing the video and examining it for clues – such as the style of clothing or embroidery on the cushions – to where the video was filmed. But this is of no practical value. They used the same methods for ten years to try to track down Osama Bin-Laden after the invasion of Afghanistan but failed to locate his hiding-place or that of Taliban leader Mulla Omar. Were it not for the Pakistani doctor who gave him away to the Americans, reportedly for a $25 million bounty, he would probably still be alive today.

Bin-Laden made a point of taking his Kalashnikov with him wherever he went and would place it on his lap while holding meetings. It held sentimental and symbolic value for him as a reminder of the days when he was involved in the Afghan jihad, and he boasted he had taken it from a Russian officer he had killed in a battle in the Tora Bora region. We do not know the story of the old Kalashnikov that appeared by Baghdadi’s side, whether it was obtained after some battle or given to him by one of his fighters.

Baghdadi’s whereabouts are unknown, and it is pure speculation to conclude from the cushions, clothing or headgear that he is still in the Iraq-Syria border region. These items could have been shown as a deliberate deception and part of the propaganda war. He may have left the area completely and relocated somewhere else after the video was recorded, perhaps with the assistance of Arab or other intelligence agencies.

Baghdadi made a point of showing that the video was recorded recently by mentioning events in Sudan and Algeria and the Israeli elections, a method Bin-Laden employed in all his videos. But the quality of the recording and the professional sound engineering and lighting give the impression that he is not a man on the run or constantly on the move, but rather in a safe place, accompanied by some of the media specialists who ran IS’ propaganda operation and specifically its al-Furqan outlet.

Baghdadi’s praise for the churches massacre in Sri Lanka, which was claimed by a local IS affiliate, must be seen as the start of a bloody new stage. It indicates that similar terrorist attacks are to follow, not only in Western capitals but also invulnerable Third World countries where security is less tight.

IS may have lost its state, its Caliphate, and its attempt at on-the-ground empowerment. But it has not lost its leadership, and it has not abandoned terrorism, which it was diverted away from when it was busy trying to maintain and manage its state and the affairs of the seven million people living under its rule. This is why, in our view, it is now more dangerous having been freed of this heavy burden. Its bloody international terrorist operations used to be a secondary and less important priority, but the situation has now changed.

The ‘empowerment’ phase ended after the heavy defeat suffered by IS in western Iraq and eastern Syria. But a new phase of regrouping, mobilisation and exacting bloody revenge may have begun. The conditions that led to the emergence of the organisation, with direct or indirect American backing, continue to apply, and it retains nurturing environments in many places in Iraq, Yemen, Syria, Libya, Afghanistan an elsewhere. That is where the danger lies.

0 thoughts on “Baghdadi is Back”