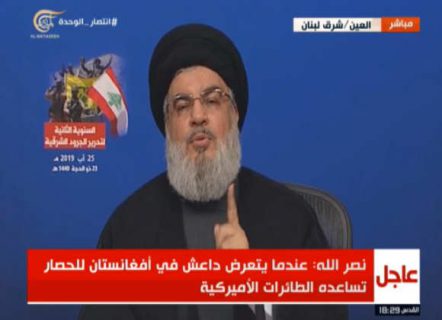 There can be no doubting that Hezbollah Secretary-General Hassan Nasrallah will make good on his pledge to retaliate for the recent Israeli drone raid against South Beirut. The only question is how and when, and what the repercussions will be.

Israel’s leaders are well aware of this, and despite their outward bravado are bracing themselves for the impending retaliatory strike, placing their forces on maximum alert.

There is nothing new about Israeli warplanes or naval vessels violating Lebanese airspace or territorial waters. They have been doing it for decades, and in recent years have routinely used Lebanese airspace to launch missiles strikes against targets inside Syria including Hezbollah weapons convoys.
But the latest attack was different. By sending two drones to the Lebanese capital on a mission to assassinate an unidentified senior Hezbollah figure, it broke the longstanding rules of engagement between the two sides. That, in our view, is the reason Nasrallah took such a grave view of the incident and sees a strong retaliatory response as imperative.

The intended target of the drones was reportedly a senior Hezbollah figure whose identity has not been disclosed, and the operation was part of a campaign of so-called targeted assassinations whose hit-list could extend to anyone.

According to Israeli media reports, the first drone was a surveillance plane that was supposed to track the targeted person as they moved along Muawwad Street in the heart of the southern suburbs, where Hezbollah maintains a secret guest-house it uses to host important visitors and senior field commanders. There is speculation that the intended victim played a role as a Hezbollah go-between with Gen. Qasem Soleimany, commander of the Iranian Revolutionary Guards’ Qods Brigade, or could even have been Soleimany himself. The second, armed, drone was blown up remotely by the Israelis after the first plane was downed, foiling the assassination operation.

This breaking of the rules of engagement that have held for the past 13 years, since the end of 2006 war, was part of a broader Israeli plan which involved attacking pro-Iranian groups in three different countries – Syria, Iraq and Lebanon – within a period of 24 hours. This seemed like an attempt to provoke Iran into retaliating in order to drag it into a wider war in which the US would get involved. But the Iranian leadership held back and avoided falling into the trap, at least until now.

The second Israeli attack on Lebanon, when warplanes bombed the base of a Syrian-backed Palestinian group, the Popular Front-General Command, in the Beqaa Valley, may also have had other purposes: as a response to Nasrallah’s speech promising to retaliate for the drone attack, and also to the three missiles fired out of the Gaza Strip on Sunday night against the settlement of Sderot.

Israeli Prime Minister Benyamin Netanyahu is convinced his re-election prospects hinge on talking and acting tough against Iran and its allies, generating a climate of crisis in the region and even triggering a regional war.

But he may have taken things too far. Nasrallah did not say when and how Hezbollah’s retaliation would come. Hezbollah leaves the planning, targeting, execution and timing of such actions to its military commanders. All we can anticipate is that it will be painful, and may not do Netanyahu’s electoral fortunes – against former generals who deride him for his lack of military experience — any good at all.

The question already being considered by analysts and observers is: what happens after Hezbollah retaliates? Will the Israeli leadership absorb the blow under US pressure to avoid provoking an all-out regional war? Or will it respond in kind, triggering further retaliation? A chain of events could be set in motion that ends up with Hezbollah unleashing its entire arsenal of missiles against Israel’s military and industrial infrastructure. And with Israel having already targeted Iran, Iraq and Syria in addition to Lebanon and Gaza, Hezbollah will not stand alone in the ensuing confrontation.