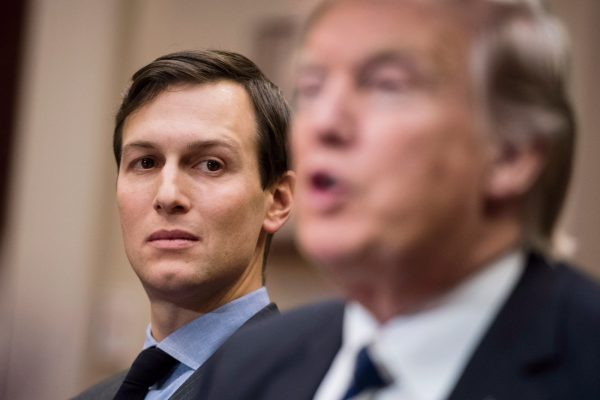 The three companies behind the leading proposal to build a “national coronavirus surveillance system”, an initiative spearheaded by Jared Kushner, boast deep ties to Google, intelligence-linked venture capital firms as well as one of last year’s eerily predictive “pandemic” simulations.

On April 7, Politico reported that the President’s son-in-law Jared Kushner was spearheading an all-private sector taskforce that aims to build a “national coronavirus surveillance system” in order to “give the government a near real-time view of where patients are seeking treatment and for what.”

This proposed nationwide network, according to that report, would be used to better inform government decision-making regarding which parts of the United States may “safely relax social-distancing rules” and those that may not. Politico treaded lightly in its discussion of such a system’s likely effects on civil liberties, but did note that some critics have compared this proposed system “to the Patriot act enacted after the 9/11 attacks.”

According to Politico, three companies collectively sent out a memo on March 22 to three administration officials – Jared Kushner, Vice President Mike Pence and Secretary of the Department of Health and Human Services Alex Azar. The memo was “widely circulated” throughout the administration relative to other submitted proposals. Those companies – Collective Medical, PatientPing and Juvare – asserted in the memo that they could collectively “supply the government with information on where and how many patients are seeking care across 80 percent of the U.S. ‘in short order.’”

Two of those companies, Collective Medical Technologies and PatientPing, declined to comment on the memo and its contents. A representative from Juvare, however, stated that the company has “spoken with officials across several federal agencies including FEMA, HHS and the CDC about its various emergency preparedness and data tools.”

Though the article downplayed the privacy concerns such a system would create, it failed to note the direct and troubling ties of these three companies, not only to Silicon Valley giants with dubious records regarding data privacy and coordination with U.S. intelligence agencies, but also ties to controversial simulations that took place last year and seemingly predicted the current coronavirus crisis.

One of Collective Medical’s largest investors is the venture capital firm Kleiner Perkins, which poured $47.5 million into the company in 2017. Kleiner Perkins, an early investor in both Google and Amazon, counts former Secretary of State Colin Powell among its “strategic advisors” and has managed a $200 million “pandemic and biodefense fund” since 2006 that has been coordinated in part with the World Health Organization. That same year, Dr. Thomas Monmath, former chief of the Fort Detrick bioweapon lab’s Virology Division and former senior science advisor to the CIA, also joined Kleiner Perkins to help “advance innovation” in relation to this specific fund. Dr. Monmath is also a former executive at an Emergent Biosolutions subsidiary.

Kleiner Perkin’s pandemic fund has heavily invested in companies that compose the Emergent Biosolutions-run Alliance for Biosecurity, such as BioCryst Pharmaceuticals, as well as NovaVax, which recently entered into a major partnership with Emergent Biosolutions to produce a coronavirus vaccine. Emergent Biosolutions, one of the most scandal ridden vaccine companies in the country with deep ties to the U.S. government and the Pentagon, is the subject of an investigation recently published by The Last American Vagabond.

Boston-based PatientPing is another company in this private sector triad lobbying to form a new national “health” surveillance system in the name of combatting the coronavirus epidemic. Founded by Jay Desai and David Berkowicz, PatientPing is a technology company focused on information-sharing in order to create a “healthcare collaboration network.” The company’s first lead investor was Google Ventures, often referred to in press releases and media reports simply as “GV.” Dr. Krishna Yeshwant of Google Ventures sits on PatientPing’s board and he also led GV’s investment in Editas Medicine, the CRISPR gene-editing start-up backed by Bill Gates and his former scientific advisor Boris Nikolic.

As its name suggests, GV is the venture capital arm of Google and over a third of its investments are in the “life sciences.” It frequently co-invests in companies with In-Q-Tel, the CIA’s venture capital firm. The cooperation is hardly surprising if one is aware of Google’s history, as the technology behemoth was a beneficiary of In-Q-Tel funding in its early days.

Google’s use (or rather misuse) of private data is well-known and they have recently been in the news in relation to the coronavirus after giving the government broad access to the private location data of Android smartphone users to allegedly help track the virus’ spread. GV’s association with In-Q-Tel and their interest in a company like PatientPing is notable given that In-Q-Tel, particularly In-Q-Tel’s current Executive Vice President Tara O’Toole, has long promoted mass surveillance programs that utilize healthcare IT services just like those offered by PatientPing and Collective Medical Technologies. O’Toole is a key and recurrent figure in The Last American Vagabond’s “Engineering Contagion” series.

PatientPing’s other lead investor is the venture capital firm Andreesen Horowitz. Andreesen Horowitz is advised by former Secretary of the Treasury Larry Summers, an associate of pedophile and intelligence asset Jeffery Epstein as well as billionaire Bill Gates. This same venture capital firm is also one of the lead investors in Toka, an Israeli intelligence-linked “start-up” founded by former Israeli Prime Minister Ehud Barak, who was also a close associate of Jeffrey Epstein. Toka describes its product portfolio as “empower[ing] governments, intelligence, and law enforcement agencies to enhance Homeland Security with groundbreaking cyber-intelligence and operational capabilities” by allowing government’s covert access to consumer electronic devices. Two members of Andreesen Horowitz, Jeff Jordan and Vijay Pande, sit on PatientPing’s board.

The last of the three companies poised to build a national coronavirus surveillance system is the emergency management software company Juvare. One of their key products is called EMTrack, which – according to Juvare’s website – provides its clients the ability to track “patients, people, pets and populations throughout any kind of event.” Its software, in general, relies heavily on Google-made or owned software.

Juvare boasts that its products have been used by the government to coordinate responses to mass shootings, such as the Las Vegas and Pulse Nightclub shootings, and past pandemic scares such as Swine Flu (H1N1), Bird Flu, Ebola and SARS. Juvare’s software products are used by 80% of state public health agencies and over 50 different U.S. federal agencies – including the FBI, the State Department and Homeland Security. It is also a contractor for the U.S. military. In Mid-March, it released a “free” software add-on for existing clients in government to track coronavirus cases including “presumptive cases” as well as the number of those under “mandatory and voluntary” quarantines.

Juvare was a notable private sector participant in the series of “Crimson Contagion” simulations that were conducted last year by the Department of Health and Human Services (HHS). Crimson Contagion, overseen and designed by HHS Assistance Secretary for Preparedness and Response (ASPR) Robert Kadlec (also a key player in the “Engineering Contagion” series), simulated the U.S. government’s response to a massive viral pandemic four times between last January and August. Those simulations involved both large and small-scale exercises that brought together 19 different federal agencies, 12 states and several private companies. One focus of those simulations, which preceded the coronavirus crisis by a matter of months, was the use of the surveillance in order to better enforce “social distancing” among Americans.

Though these private companies – as noted by Politico – are now offering their services of “surveillance” to the U.S. government “for free,” it is difficult to believe that their offer is altruistic in nature given their ties to companies and organizations that have long lobbied for or actively participated in mass surveillance for years, long before the current coronavirus came to dominate headlines and the public consciousness.

Much like the Patriot Act after 9/11, the current pandemic crisis is being used to expand mass surveillance programs, programs that are unlikely to end after the pandemic fades. To the contrary, if history is any indicator, such sweeping new surveillance systems will instead be further expanded.

It is also worth pointing out the significance of Jared Kushner’s involvement in leading this effort, as his wife Ivanka Trump – the President’s daughter – was one of the leading proponents of a controversial program last year called the Health Advanced Research Projects Agency (HARPA). HARPA seeks to create a new government “health” agency aimed at stopping mass shootings before they occur. This agency’s main program, called “Safe Home” (Stopping Aberrant Fatal Events by Helping Overcome Mental Extremes), aims to develop an artificial intelligence-based system that would analyze data harvested from consumer electronic devices as well as information provided by health-care providers to identify those who might threaten others.

Though HARPA ultimately failed to gain traction, a similarly Orwellian mass surveillance system is now being promoted in its place, with coronavirus now replacing mass shootings as the official justification. The superficial re-branding of this new, far-reaching mass surveillance system aims to justify its imposition by framing it as a solution to whatever is currently inspiring the most fear among Americans, with the hope that something sticks. These transparent attempts to gain public consent for further expansion of unconstitutional surveillance strongly suggests that such a system is aimed at expanding authoritarianism and further reducing American civil liberties and has little to do with protecting “public health” and assisting the country’s response to coronavirus.