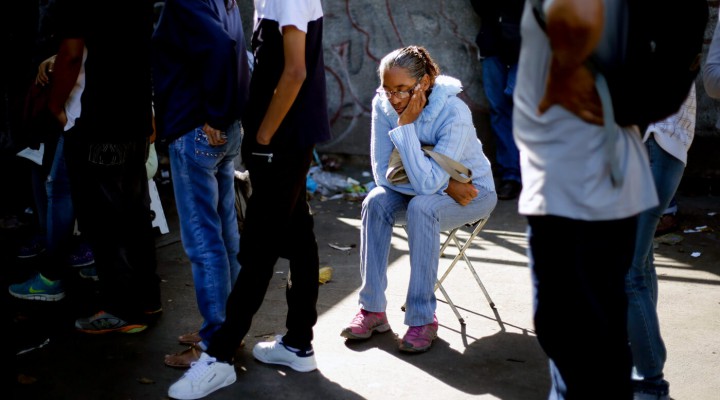 In a comprehensive interview with the U.K.-based outlet The Independentpublished on Sunday, former special UN rapporteur Alfred de Zayas claimed that crippling U.S. sanctions imposed on Venezuela for the past several years are illegal and amount to “economic warfare” against the Bolivarian Republic. De Zayas also asserted that the U.S. sanctions targeting Venezuela could amount to “crimes against humanity” under international law, share much of the responsibility for the current economic crisis in Venezuela, and have resulted in needless deaths of Venezuelans as a result.

De Zayas, who completed his term at the UN less than a year ago, has been critical of the U.S. sanctions regimen — which began in earnest in 2015 when former President Barack Obama declared Venezuela a “national security threat” without evidence. Since then, President Donald Trump has intensified sanctions and has also openly mulled a military intervention in the country, which has the world’s largest proven oil reserves.

Notably, this is not the first time that de Zayas has spoken up about the dangerous consequences of U.S. sanctions. Last September, de Zayas presented an explosive report he had helped compile to the UN Human Rights Council, showing that “economic warfare,” and sanctions in particular, practiced by the U.S. and its allies have greatly exacerbated Venezuela’s economic crisis. The U.S. had withdrawn from the UN Human Rights Council a few months prior to the release of de Zaya’s report, citing the body’s alleged bias against Israel.

Though de Zayas also blamed the Venezuelan government, led by President Nicolás Maduro, for overdependence on oil, poor governance and corruption, his report called for the International Criminal Court to investigate economic sanctions imposed by the U.S. against Venezuela as a possible crime against humanity per Article 7 of the Rome Statute.

In his report, which de Zayas claims has been largely ignored by the UN since its release, the former UN rapporteur wrote:

Modern-day economic sanctions and blockades are comparable with medieval sieges of towns….Twenty-first-century sanctions attempt to bring not just a town, but sovereign countries to their knees.”

De Zayas went on to the tell The Independent that “sanctions kill” and discussed how these measures disproportionately affect the poorest of society and often cause deaths from the resulting shortages in food, medicine and other essential goods. He also told The Independentthat these tactics aimed at a country’s most vulnerable civilians were intended to coerce economic chaos and regime change in Venezuela.

Challenging the narrative, only to be ignored

In his interview, de Zayas opened up about why he felt that the UN and much of the international community had ignored his findings despite the fact that he was the first UN official to visit and report from the country in 21 years:

Indeed, de Zaya’s past report and recent interview are at odds with the narratives commonly promoted by many media outlets and even some prominent NGOs, which lay the entirety of the blame for the country’s economic crisis on the Maduro-led government.

De Zayas, who was also formerly the UN Independent Expert on the Promotion of a Democratic and Equitable International Order, added:

When I came back [the UN and media were] not interested. Because I am not singing the song I’m supposed to sing so I don’t exist … And my report, as I said, was formally presented but there has been no debate on the report. It has been filed away.”

He also recounted to The Independent that he had been given the “cold shoulder” by top UN officials, including then-UN Human Rights Commissioner Zeid Ra’ad Al Hussein, because they “are only interested in a rapporteur who is going to … do grandstanding, is going to condemn the government and ask for regime change. And I went there to listen. I went there to find out what’s actually going on.”

Ultimately, de Zayas — a Cuban-born American citizen — felt that the U.S.’ methods of “persuasion” were largely responsible for the decision of top UN officials to ignore his report. The former UN official noted:

I’ve seen that happen in the Human Rights Council, how the United States twists arms and convinces countries to vote the way they want them to vote, or there will be economic consequences, and these things are not reflected in the press.”

However, some incidents to this effect have received coverage in recent years.

“No one would give a damn”

De Zayas also pulled no punches went it came to discussing the U.S.’ true motives for waging “economic warfare” and last week’s decision by the Trump administration to recognize the unelected 35-year-old politician of the CIA-linked, U.S.-funded Popular Will party, Juan Guaidó, as the “legitimate” interim president of Venezuela:

What’s at stake is the enormous, enormous natural resources of Venezuela. And I sense that if Venezuela had no natural resources no one would give a damn about Chavez or Maduro or anybody else there… If you crush this government and you bring in a neoliberal government that is going to privatize everything and is going to sell out, a lot of transnational corporations stand to gain enormous profits and the United States is driven by the transnational corporations.”

Given his nuanced perspective on the crisis in Venezuela, it seems that de Zayas’ recent remarks — much like his past report on the country — will go ignored by the UN and the international media for challenging the “simple narrative” that not only manufactures consent for U.S.-backed regime change in Venezuela but also absolves the U.S. of responsibility for the country’s current crisis.