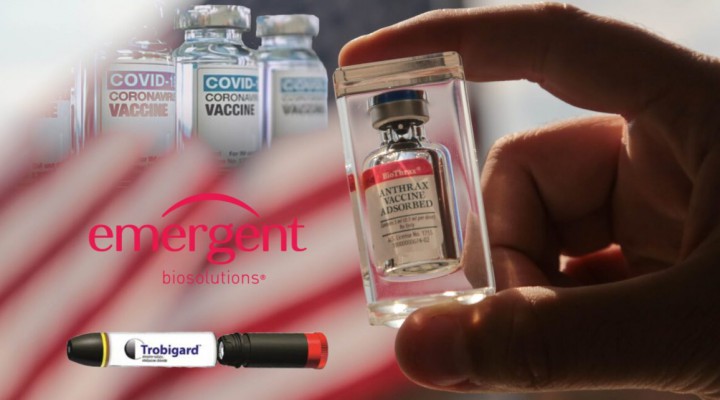 Evidence of the corruption of the company Emergent BioSolutions has emerged yet again as the firm, set to play a key role in the manufacture of four leading COVID-19 vaccine candidates, has been caught selling the US government a biodefense product it knew was non-functional.

Internal documents and e-mails from the “life sciences” company Emergent BioSolutions reveal that the company was aware that its biodefense product for the treatment of nerve gas exposure, sold under the brand name Trobigard, was both non-functional and untested for safety or efficacy while it was actively marketing the product to the U.S. government.

The firm was well aware of the fact that Trobigard’s functionality and safety in humans had never been tested several months before it was awarded a no-bid $25 million contract in October 2017 and a subsequent $100 million contract in 2019 to supply troves of the product to the State Department. Indeed, the results of the company’s first study on Trobigard’s efficacy in treating exposure to nerve gas were not even available until six weeks after Emergent had won the contract with the State Department and, even then, those results could “not be directly extrapolated to the human situation,” per the study’s authors.

According to internal company records and emails from Emergent employees and government officials obtained by The Washington Post, Emergent’s director of regulatory affairs, Brenda Wolling, stated in July 2017 that “functionality testing has not been successful in this device [Trobigard]” and that even describing Trobigard as “a treatment of nerve agent poisoning” was inaccurate because that claim “implies that we have efficacy data showing it works.”

Emergent BioSolutions declined to answer if the inaccurate marketing claims that Trobigard had been tested for safety and efficacy had been made to State Department officials prior to the awarding of the first contract for Trobigard in October 2017. The company did, however, state that Wolling’s claims had been “taken seriously” but that they did “not necessarily represent the company’s position.”

Notably, Wolling had sent internal warnings about Trobigard to colleagues a year prior, in 2016, telling Emergent salespeople to “exclude efficacy claims” about the biodefense product when marketing it to potential buyers. She specifically stated that “we have not substantiated that this co-formulated product is efficacious or safe, and have never tested against nerve agents as an antidote.” Also in 2016, a former Emergent executive, Dan Mallon, was also found to have admitted to Emergent employees that “Emergent sales representatives had made unsupported claims about Trobigard to clients.”

Even Emergent’s spokeswoman Nina DeLorenzo has since openly acknowledged that “Emergent has not tested the safety or efficacy of atropine and obidoxime co-formulated,” meaning that the combination of the two drugs that compose Trobigard has never been found to be safe or even work.

“Emergent made clear to government agencies interested in procuring Trobigard that they were doing so based on their own determination of need, without this type of safety or efficacy data from Emergent,” DeLorenzo told The Washington Post, essentially declaring that Emergent’s policy with respect to Trobigard is that of “buyer beware.”

Yet, some of Trobigard’s issues were so glaring and obvious that they resulted in public recalls, with the company recalling 61,000 units that had been sold to the United Arab Emirate in January 2019. While Emergent’s contract with the State Department obligated them to report “any issues with the safety and efficacy of delivered or ordered products and/or manufacturing or quality of the production lines” in a timely manner, the company argued that the recall in the UAE was unrelated to the State Department’s orders of Trobigard because they were different production batches. A similar recall was later made with units of Trobigard that had been sold to Italy’s government and Emergent chose to notify the State Department on that occasion. Trobigard had also been plagued with production issues, such as that which resulted in the discoloration of Trobigard injectors following sterilization, referred to as the “red spots” issue in company records.

The end result of Trobigard’s troubles was ultimately Emergent’s quiet decision to re-list it as a product in development as opposed to a marketable product on its website and to require that all future sales of Trobigard be approved by Emergent’s medical, legal and regulatory departments. However, Emergent has maintained that the Trobigard injectors sold to the State Department are safe, despite having admitted that no safety or efficacy tests of the product in humans have ever been conducted. The company has continued to receive payments from their multi-million dollar contracts with the State Department, the last of which was made last September.

Trobigard’s numerous issues appear to be precisely why Emergent sought to market the troubled product to the State Department in the first place, as marketing the product for use by U.S. diplomats overseas allowed Emergent to avoid needing the approval of the U.S. Food and Drug Administration (FDA), which is necessary for the product’s sale within the United States. In order to facilitate Trobigard’s sale without FDA approval, Emergent sold Trobigard to the State Department through a subsidiary based in the U.K. and had the injectors assembled in Europe where the finished product was then sent to U.S. embassies around the world. Trobigard is not currently approved for use by the health authorities of any nation.

An Abysmal Track Record Gets Worse

Despite Emergent’s rather nefarious efforts to duplicitously market faulty and untested biodefense products, the Department of Defense recently awarded them a contract worth up to $75 million to “develop other injectors for potential use by troops to counter certain kinds of chemical attacks.” Emergent BioSolutions, particularly before the company restructured and changed its name from BioPort in 2004, has long been notorious for its close “revolving door” ties to the Pentagon as well as the Department of Health and Human Services (HHS) in addition to its intimate involvement in the Anthrax vaccine scandal where the Pentagon was found guilty in 2004 of illegally using Emergent’s anthrax vaccine in an “experimental” and “off-label” way on U.S. troops.

That 2004 ruling focused on the Pentagon’s mandatory anthrax vaccination campaign for U.S. troops, which began in the late 1990s, and the fact that Emergent BioSolution’s anthrax vaccine, marketed as BioThrax, had never been subjected to either safety tests or tests that proved its efficacy per its intended use, i.e. protecting troops from the inhalation of weaponized anthrax. The ruling was essentially circumvented by the Pentagon in 2006, when the military decided to resume mandatory anthrax immunizations among U.S. servicemen soon after the FDA approved BioThrax as a treatment for anthrax inhalation, despite no in-depth studies on BioThrax’s efficacy or safety being conducted following the 2004 ruling.

The recent revelations about Emergent’s biodefense product Trobigard show that the company continues to follow the same corrupt playbook, with the firm relying on their connections to government officials thanks to the public-private “revolving door” and their own veritable army of lobbyists to sell untested and unsafe products to the federal government.

One of Emergent’s greatest enablers in the U.S. government today is HHS’ Assistant Secretary for Preparedness and Response (ASPR), Robert Kadlec. Kadlec, once a lobbyist for Emergent who also co-founded a biodefense company with Emergent’s founder Fuad El-Hibri, had informed one of Emergent’s top lobbyists, Christopher Frech, about a “potential opportunity in Japan” after an official visit to the country in 2019. A spokeswoman for Kadlec later stated that “Dr. Kadlec was contacted by Japanese senior government officials asking for American suppliers of medical countermeasures in preparation for the Olympic Games, and Kadlec provided them contacts with multiple suppliers.”

During Kadlec’s tenure at HHS, Emergent BioSolutions has become the largest contractor to the HHS office he oversees, which also now exercises complete control over the Strategic National Stockpile (SNS). Kadlec spent the better part of his lengthy career orchestrating both the creation of the SNS and the consolidation of its control by a single office (HHS’ ASPR). It is partially thanks to Kadlec, whose office is also in charge of major aspects of the U.S. government’s COVID-19 response, that Emergent BioSolutions is set to play a key role in the manufacture of at least four of the leading COVID-19 vaccine candidates, despite Emergent’s abysmal track record involving the sale of untested, unsafe and non-functional products.

As the race to bring the first COVID-19 vaccine to market has heated up, Emergent BioSolutions has forged partnerships with the companies creating most of the leading COVID-19 vaccine candidates, including Johnson & Johnson, Vaxart, Novavax and AstraZeneca. Per these partnerships, Emergent BioSolutions will be the main manufacturer for the vaccine candidates developed by the aforementioned companies, some of which are developing their vaccines with explicit U.S. government support.

In addition, the U.S. government itself has awarded Emergent a $628 million contract by the Biomedical Advanced Research and Development Authority (BARDA), a division of HHS overseen by Robert Kadlec’s office. Per an Emergent press release, this BARDA contract builds off of an existing contract between BARDA and Emergent and “secures, on behalf of leading COVID-19 vaccine innovators that are supported by the government, capacity for drug substance manufacturing at the company’s Baltimore Bayview facility and for drug product manufacturing at the Baltimore Camden and locations.” In other words, the contract essentially ensures that Emergent will be involved in manufacturing the U.S. government’s COVID-19 vaccine candidate of choice in spite of their horrendous track record on product testing and product safety.