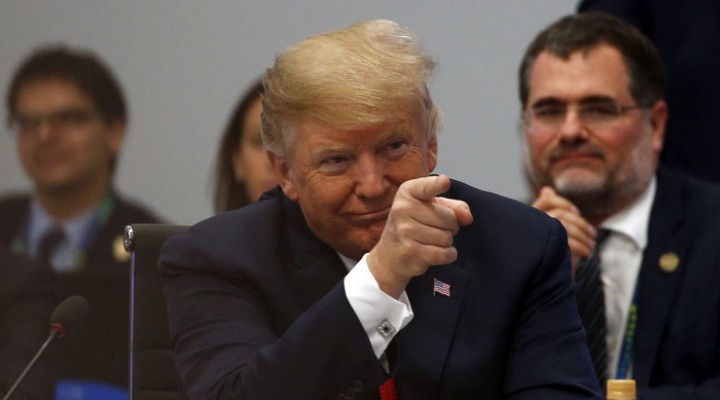 Those who accept the policies of the Trump administration, cancellation of the JCPOA with Iran, seizing oil fields in Syria, endless sanctions on nation after nation, Europe blackmailed, endless threats emanating almost hourly from Trump’s iPhone as “national policy” or even criminally deranged is simply not paying attention.

There is a method, and it isn’t the madness it appears to be. Trump and company have remade the “business environment of the world” in a way Americans are quite familiar with. We call it “organized crime.”

Currently, representatives of American political leaders are operating in over 60 nations. These aren’t diplomats, though some actually are, technically at least, but most are simply “business agents,” often with long criminal histories.

Michael: Well when Johnny was first starting out, he was signed to this contract with a big-band leader. And as his career got better and better he wanted to get out of it. Now, Johnny is my father’s godson. My father went to see the bandleader, and offered him $10,000 to let Johnny go, but the bandleader said no. So the next day, my father went to see the bandleader again, only this time with Luca Brasi. Within an hour, the bandleader signed the release, with a certified check of $1,000.
Kay: How did he do that?
Michael: My father made him an offer he couldn’t refuse.
Kay: What was that?
Michael: Luca Brasi held a gun to his head, and my father assured him that either his brains or his signature would be on the contract.

Today, Luca Brasi has been superseded by a drone assassination or, just perhaps, a color revolution at the hands of Google and Facebook.

Some of what you read is almost common knowledge. Despite broad censorship, it is relatively commonly known that Jared Kushner’s shaky personal finances received a generous bailout from Saudi Arabia, real estate loans but also broad partnerships for his father in law also, including Saudi Arabia’s first official brothel.

There is also the glaring issue of Netanyahu’s corruption, of which only the most minor areas are subject to his current criminal indictment in Israel. In truth, Netanyahu has made billions, receiving kickbacks for military contracts from the US, Germany and other nations, but going much further as well.

Netanyahu, while prime minister of Israel, has been co-employed by the Adelson casino operations group, making presentations on their behalf tied to trades for stolen American intelligence and technology.

The list of political leaders in the Middle East profiting from ISIS and al Qaeda would be frightening but it began much earlier. The vital Baku-Kirkuk-Ceyhan oil pipeline that services 30% of the world’s oil reserves and passes through a number of nations began pumping stolen oil a decade before ISIS existed.

ISIS simply took over operations from the American occupiers of Iraq, or, more likely, “partnered with,” adding new players to existing pirate operations that included Exxon and BP in what Iraq estimates as $1 trillion in stolen assets.

There are stories that are told, in part at least, told then buried, pushed out of sight and considered unimportant as an endless flow of wild conspiracy theories fabricated by “official sources” dominates the fake information flow.

It is impossible for someone working in banking, oil, defense or even in relatively innocent NGOs, though few exist today that are not turned subverted or controlled by intelligence agencies, without stumbling over ham-handed resource looting around the world.

In recent days, moves against Nigeria by Trump have been directly tied to oil deals where hefty commissions are demanded by American politicians, in some cases up to 3% of gross sale, based on Platts Marketscan prices.

In Sudan, for instance, many members of the current government still face international criminal charges tied to Darfur atrocities. Moreover, Sudan is still “terror listed” and is being financially choked by American sanctions.

Most recently, representatives, albeit “private” of the White House demanded and received $350 million in diamonds from that poverty-stricken nation, in trade for “efforts” on behalf of leaders facing prosecution seeking US intervention.

In fact, the original division of that nation, the separation of South Sudan, was predicated on negotiations between Washington, Khartoum and the UAE over “delisting” then President Omar al-Bashir as a war criminal. I acted as intermediary in those negotiations and continue to consult with the Khartoum government.

Similar shakedowns are going on in Malaysia, Indonesia, Sri Lanka, Ethiopia, Egypt, Libya, Algeria, Morocco, and the list can go on forever. When it gets to the Western Hemisphere, into Central and South America, Smedley Butler’s words again serve us well. Nothing done today is without historical context.

Excerpt from a speech delivered in 1933, by Major General Smedley Butler, USMC.

War is just a racket. A racket is best described, I believe, as something that is not what it seems to the majority of people. Only a small inside group knows what it is about. It is conducted for the benefit of the very few at the expense of the masses.

I believe in adequate defense at the coastline and nothing else. If a nation comes over here to fight, then we’ll fight. The trouble with America is that when the dollar only earns 6 percent over here, then it gets restless and goes overseas to get 100 percent. Then the flag follows the dollar and the soldiers follow the flag.

I wouldn’t go to war again as I have done to protect some lousy investment of the bankers. There are only two things we should fight for. One is the defense of our homes and the other is the Bill of Rights. War for any other reason is simply a racket.

There isn’t a trick in the racketeering bag that the military gang is blind to. It has its “finger men” to point out enemies, its “muscle men” to destroy enemies, its “brain men” to plan war preparations, and a “Big Boss” Super-Nationalistic-Capitalism.

It may seem odd for me, a military man to adopt such a comparison. Truthfulness compels me to. I spent thirty- three years and four months in active military service as a member of this country’s most agile military force, the Marine Corps. I served in all commissioned ranks from Second Lieutenant to Major-General. And during that period, I spent most of my time being a high class muscle- man for Big Business, for Wall Street and for the Bankers. In short, I was a racketeer, a gangster for capitalism.

I suspected I was just part of a racket at the time. Now I am sure of it. Like all the members of the military profession, I never had a thought of my own until I left the service. My mental faculties remained in suspended animation while I obeyed the orders of higher-ups. This is typical with everyone in the military service.

I helped make Mexico, especially Tampico, safe for American oil interests in 1914. I helped make Haiti and Cuba a decent place for the National City Bank boys to collect revenues in. I helped in the raping of half a dozen Central American republics for the benefits of Wall Street. The record of racketeering is long. I helped purify Nicaragua for the international banking house of Brown Brothers in 1909-1912 (where have I heard that name before?). I brought light to the Dominican Republic for American sugar interests in 1916. In China I helped to see to it that Standard Oil went its way unmolested.

During those years, I had, as the boys in the back room would say, a swell racket. Looking back on it, I feel that I could have given Al Capone a few hints. The best he could do was to operate his racket in three districts. I operated on three continents.

As close as we come to Butler in recent times is General Wesley Clark. In 2007, Clark, former Supreme Allied Commander of NATO, made the following statement:

“About ten days after 9/11, I went through the Pentagon and I saw Secretary Rumsfeld and Deputy Secretary Wolfowitz. I went downstairs just to say hello to some of the people on the Joint Staff who used to work for me, and one of the generals called me in. He said, ‘Sir, you’ve got to come in and talk to me a second.’ I said, ‘Well, you’re too busy.’ He said, ‘No, no.” He says, ‘We’ve made the decision we’re going to war with Iraq.’ This was on or about the 20th of September. I said, ‘We’re going to war with Iraq? Why?” He said, ‘I don’t know.’ He said, ‘I guess they don’t know what else to do.’ So I said, ‘Well, did they find some information connecting Saddam to al-Qaeda?” He said, ‘No, no.” He says, ‘There’s nothing new that way. They just made the decision to go to war with Iraq.’ He said, ‘I guess it’s like we don’t know what to do about terrorists, but we’ve got a good military and we can take down governments.” And he said, ‘I guess if the only tool you have is a hammer, every problem has to look like a nail.’

So I came back to see him a few weeks later, and by that time we were bombing in Afghanistan. I said, ‘Are we still going to war with Iraq?’ And he said, ‘Oh, it’s worse than that.’ He reached over on his desk. He picked up a piece of paper. And he said, “I just got this down from upstairs’ — meaning the Secretary of Defense’s office — ‘today.’ And he said, ‘This is a memo that describes how we’re going to take out seven countries in five years, starting with Iraq, and then Syria, Lebanon, Libya, Somalia, Sudan and, finishing off, Iran.’ I said, ‘Is it classified?’ He said, ‘Yes, sir.” I said, ‘Well, don’t show it to me.’ And I saw him a year or so ago, and I said, “You remember that?” He said, ‘Sir, I didn’t show you that memo! I didn’t show it to you!’”

A small army of “hungry travelers,” representing the private interests of the White House, Pentagon and Congress, fully backed by the CIA and the militarized social media and internet giants that can and have put thousands of paid rioters (and the snipers to kill them) on the streets time and time again, in nation after nation.

The weapons, terror lists, sanctions, advanced arms to unfriendly neighbors or, now at the top of the list, crushing the value of a national currency as we have seen in Lebanon, Syria, Iran but also in Pakistan.

A longer list? Venezuela, Argentina, Turkey, Brazil, India and the Philippines, but the vulnerable nations include any with significant debt, collapse the currency, apply sanctions, begin orchestrated social media warfare and then send in the clowns, the bagmen for Washington.

The long and short of it? There is no more American foreign policy, only power and influence, money laundering, bank accounts in the Cayman Islands and a nation whose political and even military leaders are tired of working for gangsters.

They have decided to be the gangsters.

America’s decline around the world, Is it for the best?

0 thoughts on ““Mobbed up” American Policy, the Global Shakedown”