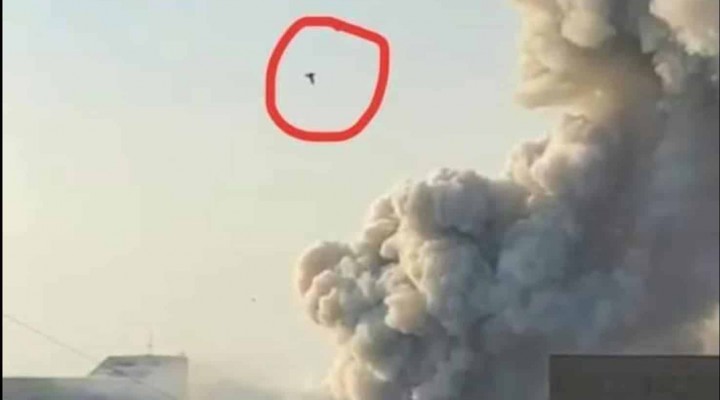 Trump confirms this was a bombing, not an accident and is immediately scourged by pro-Israel press…starting with the Daily Beast

#Breaking #Syria President Assad orders all borders and ports in the country open to #Lebanon, orders caravans of ambulances to head to #Beirut and ferry injured to hospitals in #Damascus, and launches an air bridge of medical and food supplies between the two cities

This is the radiation signature of the explosion received from a source in Italy, submitted to VT by the International Atomic Energy Agency (UN)

NO THE HELL IT WAS NOT!

VT: A general in the Lebanese Army reports that Israel dropped a tactical nuclear weapon on the port of Beirut today.  He reports that this was done to collapse the current political regime there and revolt against Hezbollah.

Their denial, almost identical to Israel’s supports this hypothesis.

As the lies begin, nothing about this explosion, the mushroom cloud or the strength of the explosion is fireworks, which was the first lie, then ammonium nitrate fertilizer, they say under 3k tons, which was stored for years to use on Lebanon’s golf courses, when they decide to build them.  No, nothing about today is funny.

We also add that earlier today, Netanyahu’s statement which we believe is Israel taking credit for the attack.  Beirut is still bomb damaged by Israel from 2006.  How you take Netanyahu’s statements as outlined in Times of Israel today, is a matter of faith, trust or conjecture.

نتنياهو قال اليوم بأن اسرائيل ستفعل”ما هو ضروري"لحماية نفسها،تهديد لحزب الله- ما يفسر التفجيرات في #بيروت
Netanyahu said “will do what is necessary in order to defend ourselves”. An obvious warning to Hezbollah, and this explains the explosions in #Beiruthttps://t.co/8ZVLNBA31A

The destruction in Beirut is far larger than you can ever imagine. The city seems like it has been hit by a small scale nuclear weapon. #beirutexplosion #lebanonpic.twitter.com/JrHv92RKCI

The weapon was 6 kilotons.  That report now:

“Getting reports from Beirut, a tactical miniature nuclear bomb has been used to attack the port, nuclear experts and researchers have randomly pointed out to the reacted particles in the fire ball.

#Beirut blast horror: Mystery explosion 'like a nuclear bomb' tears through city with boom heard as far away as Cyprus https://t.co/ZmSO9Dnj4Y pic.twitter.com/s1xGcoLp76

Even if there is going to be a government cover up for peace and political implications in the coming hours, one thing is clear, it is a clandestine operation by some anti-Lebanon foreign agency not by some random terrorist (non-state actor).

Terrorists involved in Urban Warfare in ME do not have access to these highly advance tactical weapons. If they have it now, then someone is equipping them for political gains. Let us wait for the official statements from Lebanon. I hope our friends from Beirut are safe.

As per my latest source of information from Beirut. There is going to be a government cover up. The story about “Nitrate in the containers” is going to be declared as the original cause of the second massive explosion that caused the major damage. This will become the official narrative in the msm.

I Was Bloodied and Dazed. Beirut Strangers Treated Me Like a Friend. https://t.co/gGlZAtlDeb

However, what influential and credible sources from Beirut are telling me is this:
“The Beirut explosion is about 100 times the energy than the 2015 Tianjin explosion, or 5.4 kilotons of TNT equivalent (using linear extrapolation from Tianjin, which involved 800 tonnes of ammonium nitrate).

Conventional nukes against Japan had 15 to 21 kilotons. But this explosion is different, it is because of modern tactical nuke that contains up to 10 kilotons of the hybrid material including uranium. It is this reason why we still have acid and radiation in the air. The storage facilities near the grain elevator are NOT marked for hazardous material storage, but are instead marked for general cargo. Therefore, you can guess it, what we will be fed in the coming hours.” – Ghayet Ali

Hezbollah, we are told, is expected to retaliate against Israel and they say there is no way for Syria not to be brought in.

Jeff Smith of the IAEA confirms this is a nuclear explosion. The lies about fireworks in ships and fertilizer are what we always get. You don’t store either one downtown in a major city like Beirut under any circumstances. Not much farming in Beirut and they don’t celebrate the 4th of July there.

The smoke could well be missile fuel which may mean a missile storage facility was hit by Israel. We have confirmation from Israel that they were planning to attack Beirut 5 days ago in retaliation for Hezbollah’s military attacks on Golan, which were not reported anywhere.

We are told Lebanon asked for nuclear investigators from Russia but there is no attempt to protect the site which, even if this were a modern clean weapon, still be radioactive.

New video shows nature of the blast a bit better. We will keep updating.

“A fire brigade of 10 people arrived at the scene. What happened is very similar to what happened in the Japanese cities of Hiroshima and Nagasaki. They drove to the scene and disappeared. This is a national disaster for Lebanon. We do not know how we are going to deal with this”, Beirut Governor Marwan Abboud said. (Sputnik/Moscow)

“Israel has nothing to do with the massive explosion that rocked Beirut on 4 August, the country’s parliamentary TV channel has announced. A similar statement was made by an anonymous Israeli official in an interview with Reuters, while the country’s Foreign Minister Gabi Ashkenazi alleged that the blast was likely an accident caused by a fire.” (Sputnik/Moscow)

Earlier/VT: Two explosions in Beirut, one a conventional guided bomb followed by a small nuclear weapon. The target is now confirmed to be a Hezbollah missile storage facility.

This is the second explosion, that looks like the plasma ball of a nuclear explosion to me, note the white colour indicating extremely high temperatures – no conventional explosion burns so hot. Also note the great height of the plasma ball – it is taller than the grain silo. I am very strongly reminded of the nuking of Tianjin a few years ago.The warehouse to the east he speaks of is the black building shown in the video stills above.

This smells like a cover story, I very much doubt there were any fireworks involved, the small explosions seen in the videos were more likely to have been munitions cooking off due to fires started by the first explosion.

RT has just covered the explosions and quotes a Lebanese govt. minister:

Health Minister Hamad Hassan told local media that a ship carrying fireworks exploded in the port. Video footage lends weight to his explanation, as it shows a small explosion followed by the crackling of fireworks, before a second and massively destructive blast.

Local residents have shared images showing extensive damage to property. The office of the Daily Star newspaper was smashed by the blast, with windows blown out and furniture flung to the ground. France24 correspondent Leila Molana-Allen said that her apartment was “blown apart,” adding that she thinks the blast was caused by a “missile from a jet.”

It looks very much like the Lebanese have invented the ship full of fireworks story to cover the truth. Molana-Allen is almost certainly correct – that it was some kind of missile or guided bomb dropped by a jet fighter-bomber.

Or are they going with the one we have heard so many times before when tactical nukes have been used – that it was a store of explosives that went up:Of course they would deny it was an attack, no-one ever admits a nuke went off, it’s terribly bad for public opinion.

Sodium nitrate, basically a big fertiliser bomb, nope, not buying that at all, this is the cover story they appear to be going with.

This local lady describes a feeling of melting, that sounds like radiation hitting her – being hit by radiation feels like heat, it burns you.

I don’t agree with the assessment that it was a fine particulate explosion, that wouldn’t explain the white hot plasma ball, only a nuke can explain that.

Windows blown out 7km away indicates a huge blast, again, suggesting this was indeed a nuke.

The phones going down is probably due to the EM pulse that nukes produce.

Close to ground zero in this video of the explosion in Beirut. pic.twitter.com/cjgZQ4NBG7

There are a lot of casualties, probably mostly due to flying glass and debris.