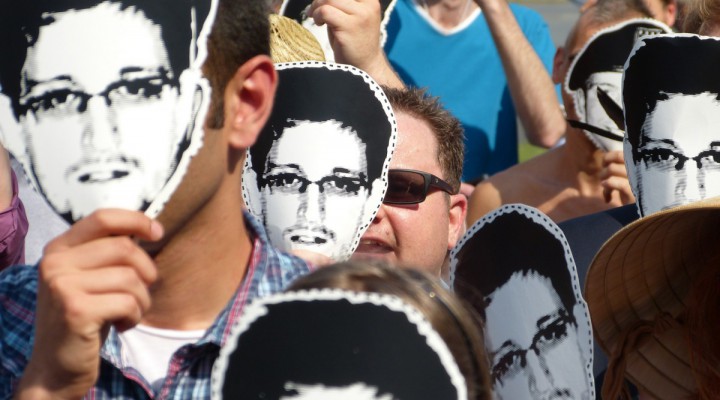 Irony is the word which comes to mind at the mention of the “Global Conference for Media Freedom” co-hosted by the UK and Canadian foreign ministers. Everything about this twilight zone gathering smacked of irony.

Irony that governments which support terrorists in Syria and whitewash Israelimurders of Palestinian journalists have the gall to hold a conference feigning concern for journalists’ rights and media freedom.

Irony that journalists actually suffering persecution and unjust imprisonment –like Kirill Vyshinsky and Julian Assange – were not the focus of the conference, with Assange only mentioned in passing, and Vyshinsky, presumably, not at all.

Irony most of all that a conference — according to Global Affairs Canada, an “international campaign to shine a global spotlight on media freedom…”– refused participation of two major and sought-out media outlets, both Russian: RT and Sputnik.

Organizers apparently tried to claim the reason for the exclusion was simply that they’d met their quota of journalists attending. But they didn’t maintain the lie to Western media, RT London correspondent Polly Boiko noted:

“Behind our backs other news channels got a very different message: ‘We have not accredited RT or Sputnik because of their active role in spreading disinformation.’”

“I think they’re trying to isolate RT and imply that it’s not a genuine broadcaster in the hope that British people and others around the world who watched RT International won’t continue to watch it.”

The irony –yet again– is that Russia isn’t doing the same, isn’t isolating Western media.

“It’s like the world has turned on its head. Moscow is literally paying people to translate Western media into Russian (see @RT_InoTV). But the UK is in a panic about Russian outlets, even running covert operations, such as “Integrity Initiative,” to “combat” a perceived threat.”

Even the Committee to Protect Journalists expressed concern at the UK’s exclusion of RT and Sputnik.

From the feedback on the UK Foreign Office tweet featuring CNN’s Christiane Amanpour about “reporting the truth”, it was refreshing to see that many saw this charade for what it was, calling it Orwellian, and noting that Britain is “torturing journalist Julian Assange as it uses @CAmanpour to produce propaganda claiming it cares about media freedom.”

I couldn’t help chiming in, noting Amanpour’s exploitation of a Syrian child in order to demonize Russia.

Theatre of the absurd. Truthful? Amanpour waved photo of Omran Daqneesh in face of Lavrov & essentially accused Russia of airstriking boy’s home. Boy’s dad told me no airstrike. It was fake news. https://www.mintpressnews.com/mintpress-meets-father-iconic-aleppo-boy-says-media-lied-son/228722/ …
Did Amanpour bother apologizing for her propaganda? Nope. https://twitter.com/foreignoffice/status/1148864435194347520 …

MintPress sat down with the father of the now-infamous Aleppo boy, Omran Daqneesh. Omran’s father, Mohammad Daqneesh, says his son was exploited by Syrian rebels and the media for political gain.,…

‘Our job is to report the truth. It is not to be neutral, it is to be truthful’ @camanpour explains the vital role that journalists play in society. #DefendMediaFreedom 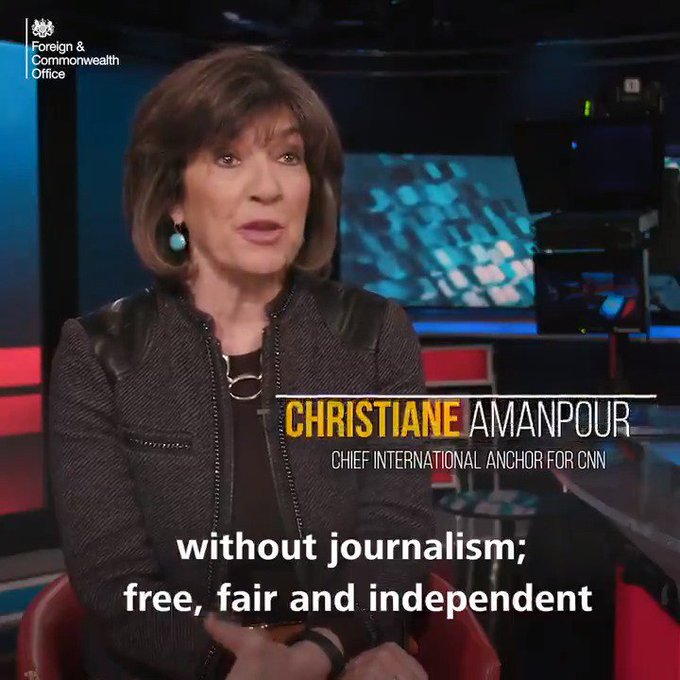 150 people are talking about this

Earlier this year, when the Lima Group was meeting in Canada to discuss the self-proclaimed non-president, Juan Guaido, Canada likewise deniedaccreditation to Telesur and Russian media.

Global Affairs Canada alleged at the time there would be “reciprocal action against Canadian media in Russia.”

However, Bryan MacDonald told me: “Any that wish can operate in Russia. There are no restrictions.”

Indeed, a perusal of the Twitter accounts of CBC and Radio Canada journalists shows they’ve continued reporting from Russia months since Canada’s allegation of reciprocal action.

Which outlets did Canada give access to during the Lima meeting? CNN,Univision, Voice of America, Al Jazeera, CBC, CTV, Global, and La Presse, among other regime-change networks.

Telesur noted at the time of the Canadian block:

“The government did not provide any reasoning for the denial of Lima Group meeting access, but has recently been called out for limiting press freedom within the country based on the preferences of its government.”

The UK conference seems to have been a who’s who of terrorist and extremist supporters and journalists who whitewash their crimes. Or, as a Canadian journalist who attended put it, the conference was:

Canadian and British governments demonstrated they’re more interested in a glossy show of support for press freedom without conducting themselves in a way that fosters it.

505 people are talking about this

That same journalist noted, “only two pre-selected Canadian journalists were permitted to ask questions of Freeland and Hunt at a brief media availability on the first day of the conference. Media were not allowed in the room for what may have been the most consequential part of the conference, a session with government representatives from around the world on “how to sustain the impact of the (Defend Media Freedom) campaign after the conference.”

Present were the BBC, CNN, and CBC, among others. Although these outlets have all systematically churned out disinformation on Syria and Russia, they were presented as truthful authorities on ‘media freedom.’

The BBC dubs itself “the most trusted international news broadcaster.” This lofty claim is easily debunked when looking at the BBC’s history of war propaganda on Syria, including its 2013, “Saving Syria’s Children”, a report which Robert Stuart has doggedly investigated, revealing its falsehoods.

Or the time the BBC used Italian photojournalist Marco Di Lauro‘s photo from Iraq to claim it was Houla, Syria. As I wrote before, “Upon demand of the aghast journalist, the claim was later retracted and corrected, an “accident”…but who was listening by that point?”

Or that time the BBC’s Middle East specialist asserted a viral video was in a “regime” area of Syria –because of the “Syrian army flag” painted on a barrel– when the clip was filmed in Malta by Norwegians, and the barrel was painted with an out-of-sequence attempt at replicating Syria’s flag.

But more telling about the BBC’s trustworthiness is the fact that, according tothe Canary, “The UK Conservative government appoints the chair of the BBC board and its four national directors.”

Pegged as a Venezuelan investigative reporter, Luz Mely Reyes was invited to the conference. Reyes advocates for non-president Juan Guaido and is cheer-led by Western media gatekeepers like TIME and the Guardian. She was thus, indeed, a perfect guest for the regime-change conference.

-Karam Nachar, a “cyber-activist working with Syrian protesters via social media platforms,” according to his bio on Democracy Now, where, as with other regime-change supporters, he has appeared frequently arguing the case for western intervention.

-Wa’ad Al Khatib, promoted before Aleppo’s liberation in 2016 as an independent filmmaker. Her clips were featured by none other than the UK’s Channel 4, one of the worst offenders in war propaganda on Syria.

The irony is that Wa’ad al-Khatib was slated to speak about the role of local journalists with respect to international media coverage of areas. But she,like so many other darlings of Western corporate media, reported fully embedded in terrorist areas, clearly with the permission and approval of terrorists.

Chairing panels on safety and protection of journalists was none other than Sky News’ Alex Crawford. In June, Crawford was seen embedded with al-Qaeda in Idlib, as were CBS journalists, both teams presumably having entered Syria illegally.

One could muse that Crawford’s safety advice was: pay up to al-Qaeda and you’ll be fine moving alongside terrorists.

A panel on “Navigating Disinformation” was chaired by Chrystia Freeland – known for her allegiances to the Ukrainian authorities and the bloody coup thatbrought them to power, to the Venezuelan coup-plotters and to the White Helmets of al-Qaeda– not exactly the most neutral or balanced person to moderate.

Fake Concern For Journalists; No Mention Of Assange, Kirill Vyshinsky

Glaringly absent from the agenda was the issue of Julian Assange, held at Belmarsh prison a short drive away. As RT pointed out, “the UK conference is happening at the same time that Julian Assange’s extradition papers are being signed by the UK.”

On July 10, the first day of the conference, Hunt stated that countries that restrict media freedom must be made to pay a diplomatic price, saying:

“If we act together we can shine a spotlight on abuses and impose a diplomatic price on those who’d harm journalists or lock them up for doing their jobs.”

This from the Foreign Secretary of a governmentwhich is “holding journalist Julian Assange behind bars pending a US extradition hearing for exposing American war crimes.”

When challenged by Ruptly journalist Barnaby Nerberka on Assange, in contrast to his lofty words on the previous day, Hunt said nothing.

293 people are talking about this
Ukrainian-Russian journalist Kirill Vyshinsky was not featured in spite of having been unjustly detained by Ukraine for 14 months now, a glaring violation of media freedom.

Likewise, certainly absent was mention of Syrian journalist Khaled al-Khatib, killed in 2017 by ISIS (IS/Islamic State, formerly ISIL), or of any of theSyrian and allied journalists murdered by jihadists before he was.

The UK Foreign Office made the mistake of tweeting about the risk of “torture, disappearances and death,” in Eastern Ukraine. 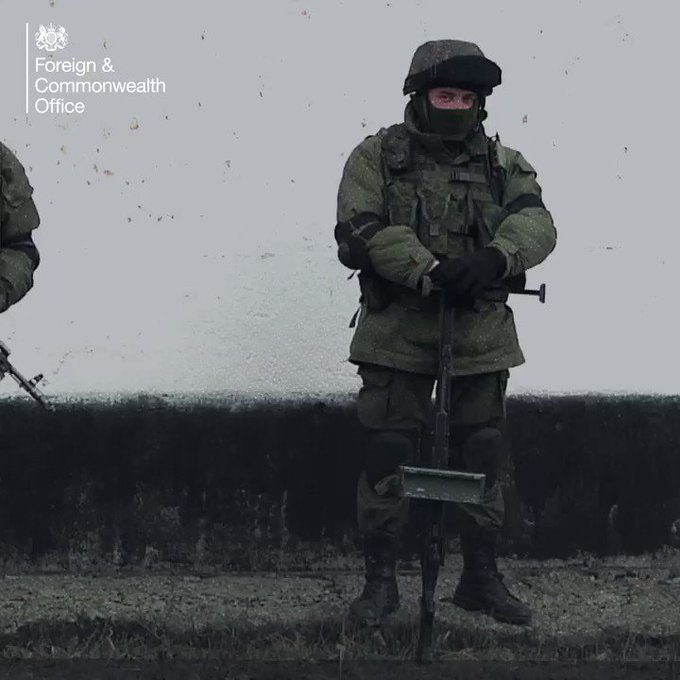 Ha-ha-ha! Where you’ve been when I (war reporter, working as stringer for Ukrainian 112 chanel) was kidnapped by Ukrainian armed forces in 2014? Hypocrites! Stop spreading lies! What’s about #Vyshynsky or #Muravitsky, for example?

Clearly, the grandiose words of foreign ministers Hunt and Freeland apply only to journalists supporting regime change, not those targeted by allied governments and their terrorists.

After the Censorship  Conference

On Saturday, I read that a popular Ukrainian TV channel was attacked with a grenade launcher on the day an Oliver Stone documentary on Ukraine was to be aired.

“Any reaction from so-called ‘Global Media Freedom’ conference co-hosts Freeland & Hunt, or those who pledged to ‘shine a light on violations & abuses of media freedom, bringing them to the attention of global public and working towards accountability’”.

My question was of course rhetorical, not honestly expecting those governmental representatives who signed a pledge “to work together to protect media freedom” to actually do that.

Their pledge entailed committing to “shine a light on violations and abuses of media freedom, bringing them to the attention of the global public and working towards accountability.” How ironic.