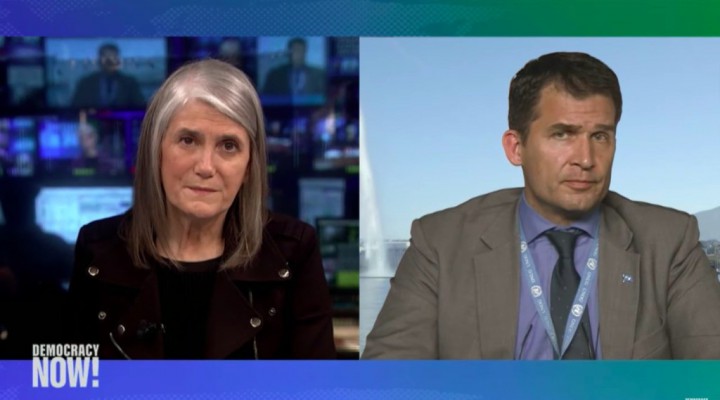 Democracy Now has conducted a thorough interview with the UN Special Rapporteur who found that a collaboration between multiple governments in “a relentless and unrestrained campaign of public mobbing, intimidation and defamation” has placed such severe stress on WikiLeaks founder Julian Assange and done so much damage to his psychological well being that it can only be described as torture.

The 15-minute interview is by far the most in-depth breakdown of UN Special Rapporteur Nils Melzer’s findings that I have yet seen, and I highly recommend watching it in full for an articulate explanation of Assange’s persecution and the physical, psychological, and legal abuses that have been inflicted upon him.

But I am writing this article to highlight a specific part of this interview which I am quite sure I’ll be quoting again and again in my future reporting on Assange’s plight, because it perfectly illustrates with great authority an aspect of his persecution which has gone severely under-acknowledged despite the incalculable damage that it has done to Assange, to his case, and to society as a whole.

While discussing the unjustly stacked biases which Assange faces in the governments that are participating in his persecution, Melzer said something very, very interesting, which I will highlight in bold in the following text:

“I believe we have to take a step back and look at all these proceedings, how they have been conducted, and come to our own conclusions whether these are fair. We also have to take a step back and look at this whole narrative of suspected rapist; narcissist; selfish, ungrateful person; hacker, and scratch the surface a little bit and see what’s below there. When I was first approached by his defense team seeking protection from my mandate in December last year, I was reluctant to do so, because, me, too, I had been affected by this prejudice that I had absorbed through all these public, you know, narratives spread in the media over the years. And only when I scratched the surface a little bit, I saw how little foundation there was to back this up and how much fabrication and manipulation there is in this case. So I encourage everybody to really look below the surface in this case.”

Hearing a UN expert lay this out with such honesty, humility and clarity is perhaps the most pleasantly astonishing thing that I have ever witnessed in the entire time I’ve been engaged in political commentary.

For ages WikiLeaks supporters like myself have been doing our best to highlight the unbelievably massive smear campaign against Assange which has convinced people across all political factions throughout the entire western world that he is a foul-smelling Nazi Kremlin spy rapist who smears feces on embassy walls and abuses his cat, but we are almost universally rebuffed by credulous media consumers who believe the information they’ve been receiving about Assange is an accurate reflection of reality. And now in comes this outsider who’d subscribed to the same smears as everyone else, but, because of his unique position (and probably because of an unusually healthy mind as well), he was able to see the whole thing for what it is and describe it for all to see.

Here it is, the comprehensive debunking of the 27 most common smears against Julian Assange. This is an ongoing project, so if there’s anything missing or inaccurate just let me know. #FreeAssange #ProtectJulianhttps://medium.com/@caityjohnstone/debunking-all-the-assange-smears-a549fd677cac …

Have you ever noticed how whenever someone inconveniences the dominant western power structure, the entire political/media class rapidly…

2,510 people are talking about this

For someone like me who writes all the time about the primary agenda of the powerful to control the dominant narrative, it is extremely gratifying to see the toxic influence of mass media smear campaigns highlighted in such a direct, simple and authoritative way. The ability of the owners of the political/media class to discredit and neutralize anyone who poses a threat to their interests simply by rearranging the narratives about them is one of the most destructive psychological weapons in their arsenal, yet it’s difficult to highlight for mainstream public understanding without testimony like Melzer’s.

The main reason it’s so hard to convince the public that they have been taken in by propaganda and smear campaigns is because for some stupid reason, one of the most shameful things anyone can do in our society is be fooled. Admitting that you have been duped takes tremendous humility and courage in such a society, and most people are too afraid of scaling that wall of shame and cognitive dissonance to be willing to face it.

Today we took one small but very positive step in that direction.