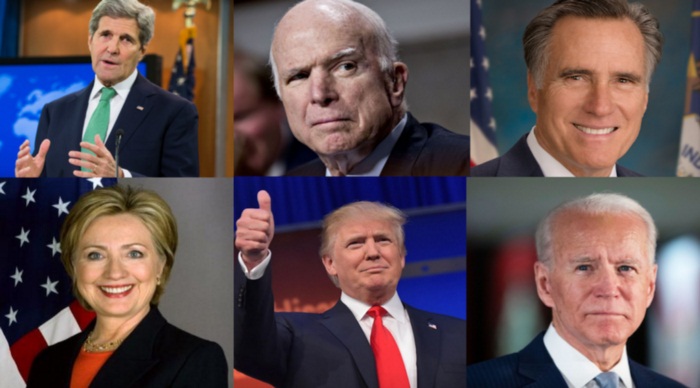 The most powerful government on earth has still yet to have a single presidential election that doesn’t feature a prominent candidate who supported one of the most evil things that government has ever done.

The United States has done many, many profoundly evil things throughout its history, but the 2003 invasion of Iraq is surely in the top ten. It killed over a million human beings, destabilized an entire region, led to the rise of ISIS and Al Nusra and facilitated a rush of new Middle Eastern interventionism, all to no benefit for the American people whatsoever, and it is utterly unforgivable.

Yet there have been no consequences for it. No real changes of any kind were made to American military, governmental, political or media institutions to ensure that a similar atrocity never happens again, because the drivers of US foreign policy had every intention of doing it again. There weren’t even any real political consequences for it, as evidenced by the fact that politicians who supported it have been ascending to Democratic and Republican presidential nominee status ever since.

This is insane. The fact that every electoral contest for commander in chief of the most powerful military in the history of civilization has featured at least one candidate who supported one of the most evil things ever done in the blood-soaked history of their nation is too insane to really put into words. And it says so much about the state of the US political system today.

The current Democratic presidential nominee is a particularly egregious example of this fact, having not just supported the Iraq invasion but played a leading role in pushing it through. Current Affairs explains:

In 2003, Biden was “a senator bullish about the push to war [in Iraq] who helped sell the Bush administration’s pitch to the American public,” who “voted for — and helped advance — the Bush agenda.” He was the war’s “most crucial” senate supporter. Biden repeated the myth that Saddam Hussein had weapons of mass destruction, saying that “these weapons must be dislodged from Saddam Hussein, or Saddam Hussein must be dislodged from power.” The resulting war was one of the most deadly catastrophes in the history of U.S. foreign policy — the Iraqi death toll was in the hundreds of thousands or possibly even the millions, and 4,500 American troops died. And that’s just the dead: countless more were left permanently maimed, to suffer with PTSD for the rest of their lives. For every dead person, there is a family who will struggle forever to get over their loss. This is no trivial issue: In selecting a commander in chief, you want someone who doesn’t launch catastrophic wars of aggression.

Before Biden it was Hillary Clinton, who as a US senator not only voted in support of the Iraq war but emphatically promoted it on the Senate floor and then more than a year after the invasion said she had no regrets about doing so.

“No, I don’t regret giving the president authority because at the time it was in the context of weapons of mass destruction, grave threats to the United States, and clearly, Saddam Hussein had been a real problem for the international community for more than a decade,” Clinton told Larry King in April 2004.

Unlike Clinton and Biden, their opponent Donald Trump was in no position to actively facilitate the Iraq invasion since he wasn’t in politics at the time, but in 2002 he was asked point-blank by Howard Stern “Are you for invading Iraq?” and he answered in the affirmative. If Trump was unable to see Iraq clearly from the political sidelines at the time, there’s no reason to believe he’d have done any better than Biden and Clinton had he been a sitting US senator in 2002 with the immense pressures to conform that were being implemented by the Bush administration.

Before them it was Republican nominee Mitt Romney in 2012, who had previously said in a 2008 Republican primary debate that “It was the right decision to go into Iraq. I supported it at the time; I support it now.”

This was long after all the facts were in and it had obvious for years from even an amoral cost-to-benefit analysis that the Iraq invasion was a disaster based on lies that caused mountains more problems than it solved.

Before that it was John McCain in 2008, who during his miserable psychopathic excuse for a life supported invading not just Iraq but damn near everyone else as well.

And in 2004 it was John Kerry running against the butcher himself George W Bush, who had just voted in support of Bush’s war in 2002.

The more you think about it, the more outrageous it becomes. The most powerful elected official in the most powerful government on earth with the most powerful military force the world has ever seen should not be prone to making horrifically evil decisions, and it’s insane that this even needs to be said.

The way principled leftists and anti-imperialists are shamed as privileged and petty whenever they point out the record of a candidate on this crucial matter is disgusting. This is not some kind of pedantic quibble, it’s the bare minimum requirement for such an immensely powerful position. The argument that the Iraq invasion was supported by most prominent politicians at the time is not a defense of those politicians, it’s an indictment of mainstream American politics.

Nobody who supported the Iraq invasion should be working in politics at all. They shouldn’t be able to find employment anywhere more prominent or influential than a cash register. It’s entirely legitimate for any voter to reject anyone who supported the unforgivable invasion of Iraq, and indeed to reject the entire political system that gave rise to them.