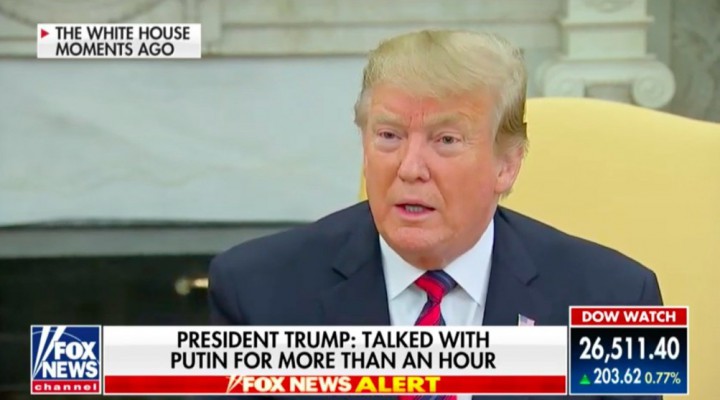 “Putin” is the number one USA trend on Twitter as of this writing, which is always a reliable sign that something very stupid is happening in American media.

“Putin” is once again the hysterical shrieking buzzword of the day because Donald Trump openly boasted at a press conference of having had an hour-long phone call with the Russian president, in which he claims the two leaders discussed nuclear de-escalation, Venezuela, North Korea, and the discredited “collusion” narrative. When asked whether he’d told Putin not to meddle in the 2020 US elections, Trump replied, “We didn’t discuss that.”

“Had a long and very good conversation with President Putin of Russia,” the president tweeted. “As I have always said, long before the Witch Hunt started, getting along with Russia, China, and everyone is a good thing, not a bad thing. We discussed Trade, Venezuela, Ukraine, North Korea, Nuclear Arms Control and even the ‘Russian Hoax.’ Very productive talk!”

Had a long and very good conversation with President Putin of Russia. As I have always said, long before the Witch Hunt started, getting along with Russia, China, and everyone is a good thing, not a bad thing….

54.1K people are talking about this

So of course everyone is now in garment-rending apocalyptic DEFCON 1 catastrophe mode.

“It bears repeating: We have been given no indication that Trump or his re-election campaign will hesitate to take advantage of Russian help again in 2020, in whatever form it might take,” warned the Wall Street Journal’s Dustin Volz.

“President Trump today continues to belittle Russian election interference in the 2016 presidential election, as well as continued election interference,” CNN’s Jake Tapper solemnly warned today. “The president went on to tell reporters later that he did not tell Putin to stop engaging in election interference which remains, according to Trump’s own top national security officials, a continuing threat to the United States. Based on the president’s public statements, and apparently his private one with Vladimir Putin, the man who led and continues to lead cyber-attacks on the United States, the president’s more concerned with underlining that Special Counsel Robert Mueller was unable to find sufficient evidence that any member of his team was involved in criminal conspiracy with Russia.”

“The simple fact is this: Trump remains — despite all available evidence — a skeptic about both Russia’s past attempts at interference in the 2016 election and, therefore, the country’s attempts to target future elections,” warns CNN’s Cris Cillizza. “That skepticism could have far reaching consequences when it comes to just how much (or little) the administration prioritizes dealing with these threats from foreign powers heading into the 2020 election. And that is a truly scary reality.”

“The 2020 campaign is already in full swing and Trump just told Putin, the man behind the most serious cyber attack on our democracy ever, that he believes it was all a hoax,” tweeted Congressman and virulent Russiagater Adam Schiff. “Once again, he betrays our national security and for what? Nothing more than his own vanity and delusion.”

“Exactly what Putin wanted and expected,” tweeted MSNBC’s Clint Watts. “This is why Russia backed Trump, elevate politicians to achieve what Russia wants – to subvert and weaken democracy, surrender the world to authoritarians, like the Kremlin.”

Exactly what Putin wanted and expected. This is why Russia backed Trump, elevate politicians to achieve what Russia wants – to subvert and weaken democracy, surrender the world to authoritarians, like the Kremlin https://twitter.com/ThePlumLineGS/status/1124360820190789633 …

Wow. The President of the United States just confirmed that he directly informed Vladimir Putin that he is not accepting the Mueller report’s conclusion that Russia interfered in our 2016 election in “sweeping and systematic” fashion.

3,201 people are talking about this

So the narrative in mainstream liberal circles today is that Putin is going to interfere in the 2020 elections, and, because that interference will surely advantage Trump, there will be no resistance to that interference.

Only blithering idiots believe this narrative.

To begin with, the public has still seen not one single shred of evidence that Russians interfered in the 2016 election in any meaningful way, and, in a post-Iraq invasion world, only idiots believe on faith the unsubstantiated claims made by government agencies about rival governments. We’ve seen the Mueller report cited as “evidence” of this interference, but the Mueller report contains nothing but assertions, and assertions are not evidence. People have tried to argue with me that Mueller would never make assertions about Russian interference without having seen copious amounts of hard, verifiable evidence, but that is exactly what Mueller did with WMDs as FBI Director in February 2003. Daniel Lazare for Consortium News documents that there are in fact some major plot holes in Mueller’s timeline, making it entirely possible that a bogus narrative is being advanced.

So there’s no reason to accept on faith that Russian election interference happened in 2016, let alone that there’s any risk of it happening in 2020. But even if you do accept the establishment Russia narrative regarding 2016, you can be certain that Moscow won’t be interfering in 2020 for Trump’s benefit. 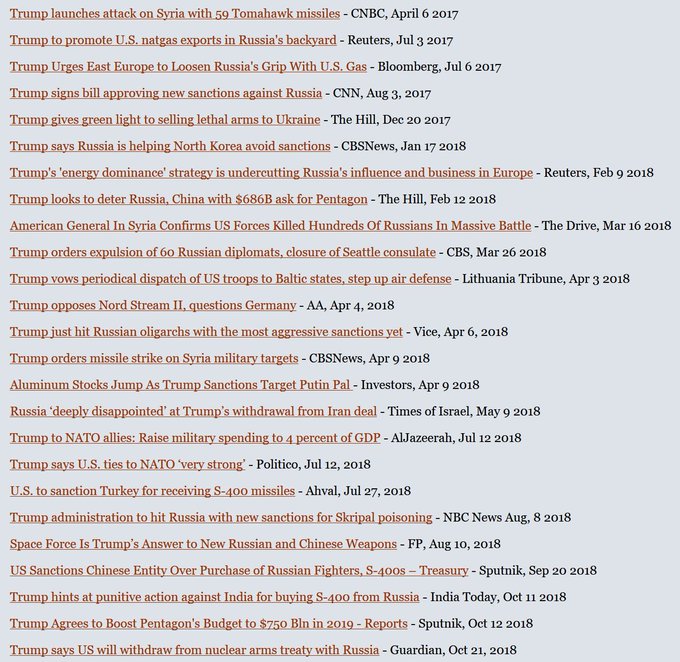 New on MoA:
Putin Asks And Trump Delivers –
A List Of All The Good Things Trump Did For Russiahttps://www.moonofalabama.org/2019/01/putin-asks-and-trump-delivers-here-is-a-list-of-all-the-good-things-trump-did-for-russia.html …

You can be absolutely certain that Russia won’t be interfering to re-elect Trump because Trump has proven to be the most hawkish president against Russia since the fall of the Soviet Union, by a very wide margin. For all his rhetoric about “getting along with Russia”, Trump has greatly escalated tensions with the nuclear superpower by staging a coup in Venezuela, implementing a Nuclear Posture Review with a much more aggressive stance against Russia, withdrawing from the INF treaty, bombing and illegally occupying Syria, arming Ukraine, and many, many other hawkish actions taken against the interests of the Russian Federation which his predecessor Obama never dared to take.

Even if Putin were the brilliant omnipotent mastermind with tentacles in every international affair as he is consistently depicted in western mainstream media, it would make no sense whatsoever for him to help re-elect an administration that has been undermining and threatening Russia at every opportunity. That will not happen.

But of course, this obvious fact will not stop the Russia conspiracy theories, because Russia conspiracy theories have nothing to do with facts. We can expect to see fact-free allegations that Russia is planning to help Trump win in 2020 getting louder and louder as the election grows nearer. We can expect to see these fact-free allegations bolstered and amplified by western government agencies who need to manufacture support for further escalations against Russia, by the mass media who need ratings, and by the Democratic Party who need to keep their base fixated on insubstantial nonsense while they force an establishment loyalist through their fake primary.

It bears repeating: We have been given no indication that Trump or his re-election campaign will hesitate to take advantage of Russian help again in 2020, in whatever form it might take. https://twitter.com/nataliewsj/status/1124353714091888641 …

157 people are talking about this

It’s so interesting how each mainstream side of this is doing exactly the opposite of what they claim to be doing: Trump claims to want to work with Russia, but in term of action his administration is attacking Russia’s interests in many hugely significant ways to an extent that is unprecedented in a post-USSR world. Democrats claim to be opposing Trump’s pernicious inclinations, but in practice they fully support all his most pernicious agendas, including the potentially world-ending escalations between two nuclear powers, and including the Venezuela regime change operation which is getting more aggressive by the day. Even the supposedly progressive wing of the Democratic Party has been mostly flowing along with this, with Alexandria Occasio-Cortez reportedly saying “I defer to caucus leadership on how we navigate this” when questioned on Trump’s Venezuela coup attempt.

The gap between reality and the dominant narratives about reality is getting wider and wider. Something’s going to have to give.