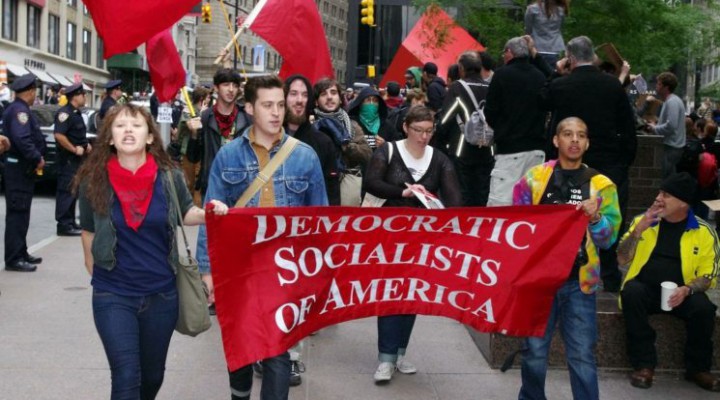 The continuing deterioration in social conditions for most Americans has resulted in an increased popular hostility towards corporate capitalism and Wall Street.

The 2020 US presidential elections are well underway with at least six Democrat contenders so far throwing their hats into the ring. For his part, incumbent President Donald Trump has newly minted a cause for his re-election – saving America from creeping socialism.

During his State of the Union speech last week, Trump conspicuously warned “fellow Americans” of the putative evil of socialism. He lambasted the “socialist dictatorship” of Venezuelan President Nicolas Maduro, then fatuously and falsely leveled all the economic misery of the South American country on the alleged failings of socialism. As if years of US economic sanctions against the country and recent confiscation of oil assets have nothing to do with Venezuela’s turmoil.

In the next lines of his annual nationwide address, Trump then linked US political opponents with Venezuela’s socialist President Maduro, retorting: “And some people want to bring socialism to the United States!”

The logic is revealing. First, that the president should even mention socialism in this Union address in such a pointed way shows that there is a foreboding concern among the American oligarchy – of which supposed “maverick” Trump is a consummate insider – that there is a surging interest in working class rights, propelled by a popular disdain towards capitalism and a growing affinity with socialism.

Secondly, the pejorative bracketing of political opponents in the US with the “Maduro regime” in Venezuela is a tried-and-trusted method of political smearing. Any would-be contender for the White House who speaks out about class issues and the systematic social failings of capitalism will be, it is calculated, denigrated as a “socialist stooge” in league with Venezuela’s Maduro.

For the 2016 election, Trump ran on the ticket of “Make America Great Again”. For the 2020 campaign, the emerging re-election slogan will be along the line of “Keep Socialism out of America”.

Trump’s erstwhile promises to salvage the “American carnage” and reinvent American greatness have transpired to be empty gimmicks of a sales conman. More than halfway into his presidency, the vast majority of ordinary working Americans are no better off, maybe even worse off. Trump’s bragging about overseeing the world’s “hottest economy” is all hot air, as detailed by American economics professor Richard Wolff. The boost in stock market indicators rather than a reinvigoration of the real productive economy is very much down to the massive tax giveaways to the super-rich and corporate executives that this real-estate-magnate-turned-president has bestowed.

The continuing deterioration in social conditions for most Americans has resulted in an increased popular hostility towards corporate capitalism, Wall Street and what more and more citizens correctly perceive as a plutocracy masquerading as “democracy”. The alienation from capitalism and the myth of the “American Dream” has resulted in a growing openness among ordinary citizens to socialism. The corruption and misery of capitalism is driving people to search for alternatives. Polls have shown majorities of US public expressing a positive identity with socialist politics. It is no longer a taboo concept. This is quite a shocking achievement in the US, where decades of government, news media and academic propaganda have tried to expunge any notion of socialism from the American mind.

A reflection of the trend is seen in the increasingly critical rhetoric among certain Democrat politicians about economic injustice. The Bernie Sanders wing of the party, which includes new wave Democrats like Alexandria Ocasio-Cortez and Tulsi Gabbard, have openly articulated the word “socialism” – which again is something of a dramatic development in the US after decades of McCarthyite witch-hunting and Edgar J Hoover-like demonization of socialists as “traitorous Reds”.

The latest Democrat to announce their bid for the White House is Massachusetts Senator Elizabeth Warren. During her contender speech last weekend at a rally for Blue Collar communities, Warren spoke scathingly of “the failure of the American system”. She talked about the chasm between the oligarchic one per cent in American society and the massive poverty of the rest. It was an implicitly radical speech.

Trump is very much in that top one per cent of super-rich who have siphoned off America’s wealth during decades of neoliberal capitalism, overseen by both Republican and Democrat administrations belonging to the two parties of Big Business.

There is, however, an awareness among the more leftwing side of the Democrats that the party has to break from its sponsorship links to Big Business and Wall Street – as epitomized by Hillary Clinton in the 2016 race – if it is to win the White House in 2020.

Trump should be an easy target for a genuine contender who can expose his empty conman talk about caring for “American workers”. Trump’s blatantly pro-rich tax banditry would also be a field day for a socialist candidate to make huge political hay. So too would his continuation of American imperialist warmongering, as most clearly manifested in the Trump administration’s outrageous interference in Venezuela’s democracy.

Donald J Trump, the big-mouth realtor, knows that he is vulnerable to a genuine political offensive from the left. There is a groundswell of opposition to “the system” among ordinary citizens – if it can harnessed by a confident socialist candidate. That would explain why Trump has lately “discovered” the threat of socialism to “our great country”.

The trouble is that it is doubtful if such a counter-candidate exists in the present US political landscape. In Elizabeth Warren’s rally at the weekend, she seemed to studiously avoid using the words “capitalism” or “socialism”. Her rival Democrat candidate, New York congresswoman Alexandria Ocasio-Cortez, reportedly distanced herself in media interviews from being identified as a socialist following Trump’s Red-baiting State of the Union speech last week.

Over the next year in the run-up to the 2020 presidential election, we can expect more such withering attempts by Trump and the establishment political class to find common cause in denigrating any opponent who sounds too much like a socialist, even if that opponent doesn’t actually use the word themselves.

The irony is rich, or maybe that should be super-rich. Trump has complained about opponents in Washington and the corporate media for waging a witch-hunt against him over his alleged links to Russia. Yet this oligarchic conman has no scruples or hesitation in using witch-hunt tactics to defile opponents who are labelled as “evil socialists”.

This desperate maneuver by Trump to use socialism as a bogeyman is unwittingly a signal that America’s plutocracy does actually view the resurgence in class politics and socialism as a real threat to its privileged siphoning off of wealth under capitalism.

Can American voters find a candidate who courageously takes up their cause? That is the kind of breakthrough that America and the rest of world needs.