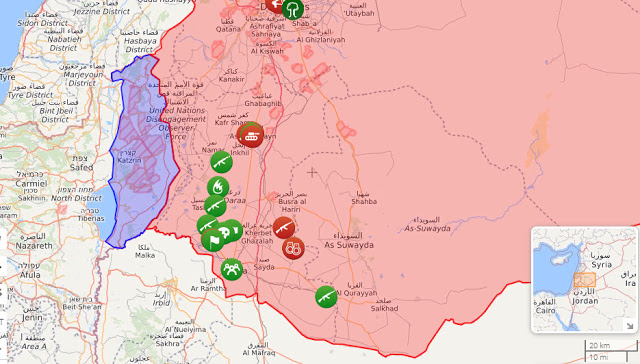 Turkey and Israel continue their aggression against Syria in an increasingly overt and direct manner – and at the cost of what little if anything remained of either nation’s regional or international credibility.

Now there is news of violence erupting in southern Syria in Daraa along the Syrian-Jordanian border in a replay of the initial US-engineered proxy war initiated against Damascus in 2011 and confirms that the US – the common denominator linking Turkish, Israeli, and Jordanian aggression – is still hard at work attempting to perpetuate the Syrian conflict and reverse its flagging fortunes amid it.

The violence in southern Syria will likely be augmented by flashpoints elsewhere in a bid to divide and distract Syrian forces from their ongoing operations and successes in northern Idlib.

This helps expose that the ongoing confrontation between Turkey and Syria isn’t ultimately being engineered in Ankara or on behalf of Turkish interests – but instead in Washington and on behalf of US interests.

This may explain why Turkey’s otherwise dead-end foreign policy has not been altered to reflect the interests of Turkey both immediately or in the intermediate to long-term future – and instead appears to be a last-ditch and desperate attempt to win Washington’s all-but-lost proxy war against Damascus.

The violence in Syria’s south is independent of Turkey’s operations in the north – but is clearly being coordinated to aid Turkey’s aggression.

Likewise – a renewed propaganda blitz has been organized across the Western media to help enhance the political impact of continued aggression against Damascus.

There are still columns published across the Western media by writers representing organizations funded by Western governments calling for regime change in Syria and the obstruction of reconstruction until this happens.

There are also attempts to use the West’s protraction of this conflict and the resulting humanitarian impact to further demonize and pressure the Syrian government. Turkey – in addition to its continued aggression within Syrian territory – has once again leveraged refugees – releasing them into Europe to fan the flames of public fear in the West.

This is not to gain Western support for Turkey’s military operations in Syria – as Turkey’s operations are carried out on behalf of the West’s own machinations. Instead – another manufactured and exploited refugee crisis is meant to garner public support from the Western public so that Western governments can more aggressively involve themselves alongside their Turkish, Israeli, and other terrorist proxies.

Ultimately this is a replay of all the same tricks used since 2011. The difference now is US and its proxies hold less territory in Syria – fewer cards politically upon the global stage – and face an entrenched Russia and Iran who have grown adept at countering US-fuelled violence and political ploys within and beyond Syria.

This recent renewal of aggression against Syria is more likely a last-ditch effort to extract concessions before the final and inevitable conclusion of the conflict – with all but total war being capable of overthrowing the Syrian government and removing Russia and Iran from their growing positions of influence within Syrian territory.

Complacency is the biggest enemy. Until every square inch of Syrian territory is liberated and its borders fully secured – the war will continue and the threat it poses to the Syrian state and its people will endure – however unlikely the nation’s complete ruination may be.