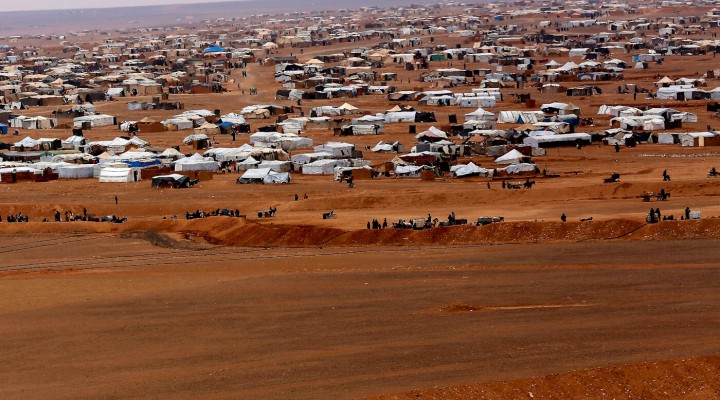 According to the Cambridge Dictionary, a concentration camp is defined as “a place where large numbers of people are kept as prisoners in extremely bad conditions, especially for political reasons.” It is undeniable that the Rukban camp fits this definition to the letter.

The United States military has rejected offers to resolve the growing humanitarian crisis in the Rukban refugee camp in Syria, which sits inside a 55 km zone occupied by the U.S. along the Syria-Jordan border. The U.S. has also refused to let any of the estimated 40,000 refugees — the majority of which are women and children — leave the camp voluntarily, even though children are dying in droves from lack of food, adequate shelter and medical care. The U.S. has also not provided humanitarian aid to the camp even though a U.S. military base is located just 20 km (12.4 miles) away.

The growing desperation inside the Rukban camp has received sparse media coverage, likely because of the U.S.’ control over the area in which the camp is located. The U.S. has been accused of refusing to let civilians leave the area — even though nearly all have expressed a desire to either return to Syrian government-held territory or seek refuge in neighboring countries such as Turkey — because the camp’s presence helps to justify the U.S.’ illegal occupation of the area.

Though the U.S. has long justified its presence in al-Tanf as necessary to defeat Daesh (ISIS), the U.S. government has also acknowledged that al-Tanf’s true strategic importance lies in U.S. efforts to “contain” Iran by blocking a connection from Iran to Syria through Iraq. Al-Tanf lies near the area where the borders of Syria, Iraq and Jordan meet. Thus, in the U.S.’ game of brinkmanship with Iran, Rukban’s estimated 40,000 inhabitants have become pawns whose basic needs are ignored by their occupiers.

U.S. shows no interest in meeting

However, the U.S. military and State Department officials in nearby Jordan rejected an invitation to Tuesday’s meeting. The U.S. military also prohibited a Syrian-Russian delegation from entering the Rukban camp on Tuesday. The delegation had sought to assess conditions in the camp, which have become increasingly desperate according to reports from a variety of outlets, including U.S. government-funded outlets like Voice of America.

The U.S.’ refusal to attend the meeting or allow the delegation passage comes less than a month after the U.S. military blocked the entry of evacuation buses overseen by Russian and Syrian forces that would have allowed refugees to leave the camp.

The buses would have entered through the “humanitarian corridors” that were recently opened on the Syrian-controlled side of the U.S.-occupied enclave. While camp inhabitants can, in theory, leave the camp through the corridors on foot, the barren area’s remoteness makes such evacuations unfeasible without vehicle transport. Although some families have left this way, the lack of record keeping within the camp has made it impossible to know how many have tried leaving this way since the corridors were opened last month. 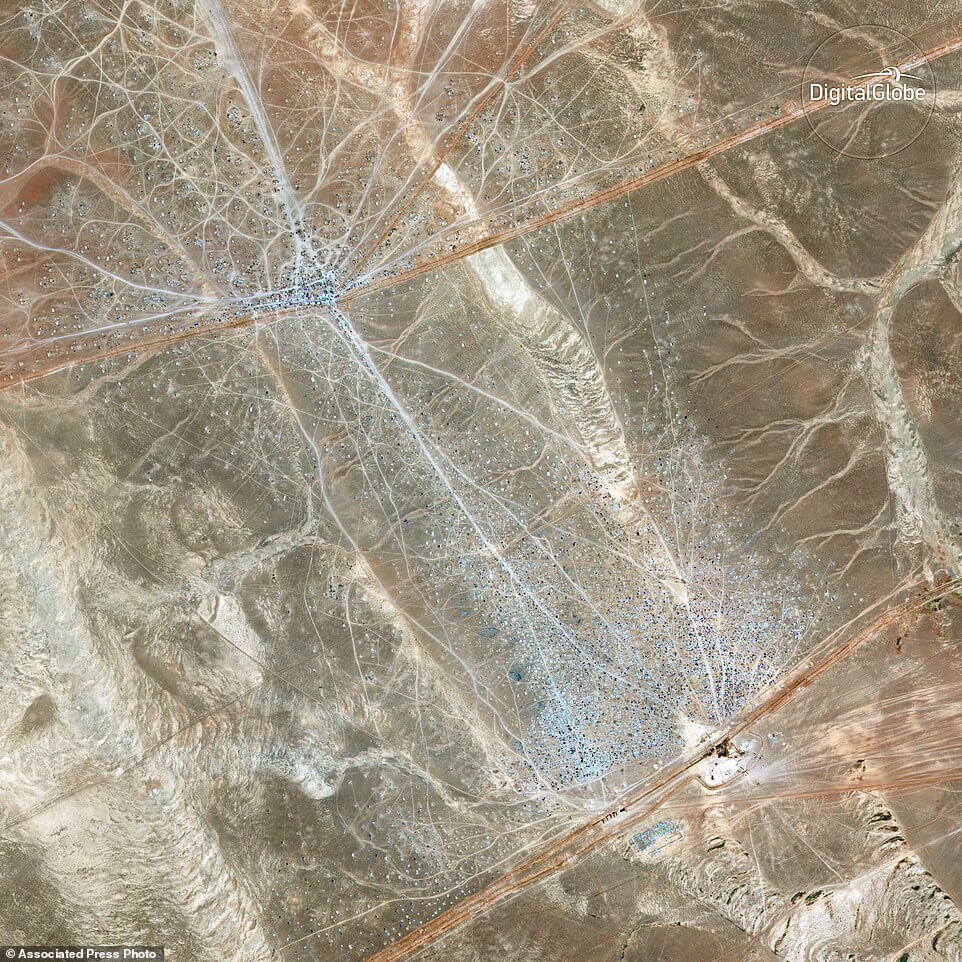 An often overlooked problem that has prevented them from leaving is that U.S.-backed and U.S.-trained “moderate rebel” groups have been known to block camp inhabitants from leaving, demanding large payments in U.S. dollars to leave the area. The U.S. military took control of Al-Tanf alongside “moderate” rebel forces in 2014 after wresting the area from Daesh. Many of those opposition groups have since been revealed to have ties and sympathies to terrorist groups, including Daesh.

The U.S. has not given a reason for its rejection of Tuesday’s meeting and had previously said that its rejection of the evacuation buses was based on its view that the buses did not meet the U.S.’ “protection standards.”

Horrific conditions and a U.S. shrug

While the U.S. has claimed that it has blocked refugees from leaving on Russian-Syrian buses are under U.S. “protection,” it has done little to abet the suffering of the tens of thousands of civilians in Rukban, even though the area is under complete U.S. military control and a U.S. military base is just a few miles away. Indeed, the extent of U.S. “aid” to the Rukban camp has been medical training of the handful of nurses in the camp, who work in conditions they describe as being like “the Stone Age” owing to the chronic lack of basic medications and doctors.

While medical care is decidedly lacking, the most pressing problem is the access to food, as starvation has become a real threat for those living in Rukban. Last October the opposition-aligned news service, the Syrian Observatory for Human Rights (SOHR), reported that the Rukban camp had been without food or essential supplies for months. Only two aid deliveries, managed jointly by the Syrian Arab Red Crescent (SARC) and the UN, were able to enter the camp.

One of those shipments, however, almost didn’t happen after the UN delayed the aid “for logistical and security reasons.” While the UN did not specify which “security reasons” had prompted the delay, it was apparently not the Syrian government, as the UN also said in the same statement that the convoy had received approval from Damascus. This suggests that the “security” concerns were related to U.S.-backed militants in the U.S.-controlled area surrounding al-Tanf. Notably, Russian and Syrian sources have claimed that these same militants often “plunder” the aid intended for the camp’s inhabitants for themselves. Children look for food scraps in a pile of trash in the Rukban camp in Syria, Nov, 2018. Photo | SNHR

Since then, the situation inside the camp has continued to deteriorate. Indeed, things have gotten so desperate that, in January, a mother attempted to set herself and her three children on fire after she couldn’t find food for three straight days and preferred to give her children a quick death rather than watch them starve. Others in the camp rescued the family, though the mother and her infant were seriously injured. Recently aid from the UN and SARC arrived in early February, the first aid shipment in over three months.

The lack of food combined with the lack of medical care has been responsible for scores of deaths in the camp — the majority of which are of children under the age of two, who often die from malnutrition and preventable diseases. Others have died from freezing weather owing to a lack of adequate shelter, with eight children dying in January for that very reason. Satellite images taken of the camp in early March showed the recent creation of a mass grave containing an estimated 300 bodies adjacent to the camp.

Despite the desperate conditions less than 13 miles from its military base, the U.S. has declined to send food, doctors, medical supplies or other forms of aid to Rukban’s inhabitants, while also preventing them from leaving. However, the U.S. has been providing militant groups in the same area with military and logistical support.

In addition to presiding over the squalid and starvation conditions in the Rukban camp, the U.S. has also given militant groups present in the area it controls — including Daesh terrorists who have “embedded” themselves in the camp on the U.S.’ watch — free rein to terrorize the camp’s refugees. These militant groups not only control the flow of food and aid in the camp but terrorize its most vulnerable inhabitants, forcing women and children into sex slavery and engaging in human trafficking. All of this is taking place in a “deconfliction zone” controlled by the U.S. military.

These extremist groups, including Daesh, are well-armed, according to Jordanian Brigadier General Sami Kafawin, who told NBC News in 2017 that these groups “have whole weapons systems … small arms, RPGs, anti-aircraft.”

The official reason for the U.S. base in al-Tanf has long been counterterrorism operations that ostensibly target Daesh. However, very few attacks against the terror group have been launched from this base and a UN report released last August found that Daesh had been given “breathing space” in U.S.-occupied areas of Syria, including al-Tanf. The U.S. has stated that it uses the al-Tanf base to train Syrian opposition fighters who then control the area around the base, including Rukban. 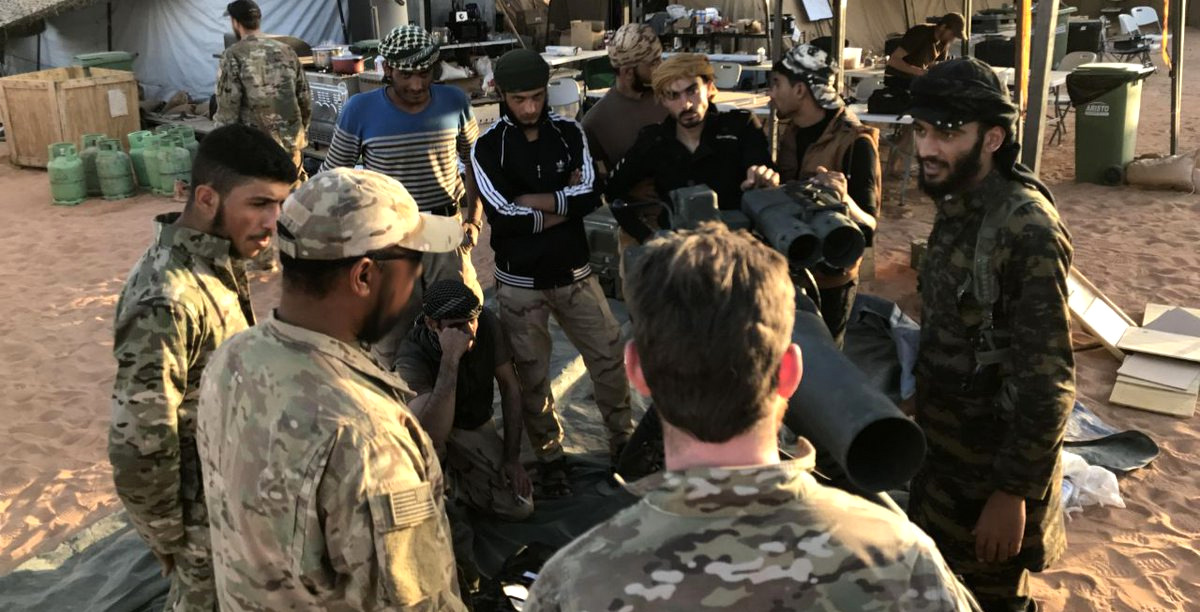 Unidentified Syrian rebels surround a piece of US weaponry during training by an American special forces member in Tanf. Photo | Hammurabi’s Justice News

With the U.S. now having claimed that Daesh has been completely defeated in Syria, the official justification for its illegal occupation of Syrian territory is wearing thin. With that justification now on shaky ground, the U.S. is increasingly having to acknowledge its main motive for its presence in al-Tanf — containing Iran and keeping Syria divided.

Indeed, a recent Reuters article notes that the U.S.-controlled area around al-Tanf that includes the Rukban camp “is designed to shield U.S. troops at the Tanf garrison and maintain for Washington a strategic foothold in an area close to a crucial supply route for Iranian weapons entering Syria from Iraq.” This was confirmed by General Joseph Votel late last year when he told NBC News that the U.S. base in al-Tanf was key in countering “the sway of Iran” in Syria.

This followed statements made last July by National Security Advisor John Bolton that U.S. troops would remain in Syria “as long as the Iranian menace continues throughout the Middle East.” This policy of Iran containment has clearly guided U.S. policy in Syria of late, with at least 1,000 U.S. troops set to stay in Syria illegally despite Daesh’s defeat and President Donald Trump’s recent calls for a troop withdrawal.

The U.S. has been accused of using the civilians trapped in Rukban as a “shield” for its continued operations in Syria aimed at containing Iran’s regional influence. Russian Foreign Minister Sergei Lavrov said earlier this month that “the fact that people are not allowed to leave [the camp] and are held hostage makes one suggest that the U.S. needs this camp to continue justifying its illegitimate presence there.” There appear to be few other explanations for the U.S.’ refusal to let camp inhabitants leave the area.

The hypocrisy of U.S. “humanitarian concerns”

The situation in the Rukban camp reveals the dark reality behind the U.S.’ occupation of Syrian territory in Al-Tanf and elsewhere. In order to pursue its policy of Iran “containment” and a divided and partitioned Syria, the U.S. is willing to imprison some 40,000 people — many of them children — in a concentration camp where international aid is blocked and where food is so scarce that mothers are setting themselves and their children on fire so they can avoid slowly starving to death.

According to the Cambridge Dictionary, a concentration camp is defined as “a place where large numbers of people are kept as prisoners in extremely bad conditions, especially for political reasons.” It is undeniable that the Rukban camp fits this definition to the letter.

That the U.S. justifies its aggressive policies around the world — from Syria to Venezuela and elsewhere — as being motivated by “humanitarian concerns” — when a refugee camp under the U.S.’ complete control in Syria is facing starvation conditions and its inhabitants are being forcefully kept confined in the camp by the U.S. military despite their expressed desire to leave — is an obscene Orwellian twist.  All this to “contain” Iranian influence in the Middle East.

Returning Syrian Refugees Were Fleeing US Proxy War, Not “Assad”