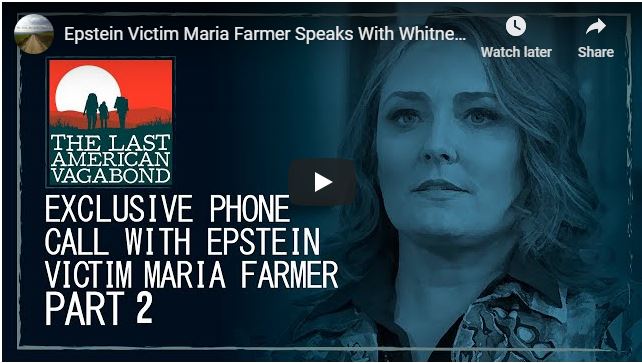 This is Part 2 of the conversation between Whitney Webb and Maria Farmer, a victim of Jeffrey Epstein and Ghislaine Maxwell who had reported both to the FBI in 1996 for child pornography, sex trafficking and sexual assault. Farmer, who has been interviewed by mainstream media outlets including The New York Times and CBS News, had reached out to Whitney because Maria felt that other outlets would not publish much of the information she had given them on the case, particularly information related to Ohio billionaire Leslie Wexner, who had close ties to Jeffrey Epstein and his sex trafficking/ blackmail operation.

Part 1 of this conversation can be heard here. The decision to release this phone call was twofold: first, to show that claims Whitney has made in recent interviews were indeed accurately based on statements Maria made during the call and to provide greater context to those statements; and second, to make the information publicly available and more easily disseminated to the widest audience possible.

During the call, Maria covers a lot of ground and the call was never intended to be released as an interview, as Whitney gave Maria free range to discuss situations and topics without prompting from Whitney.