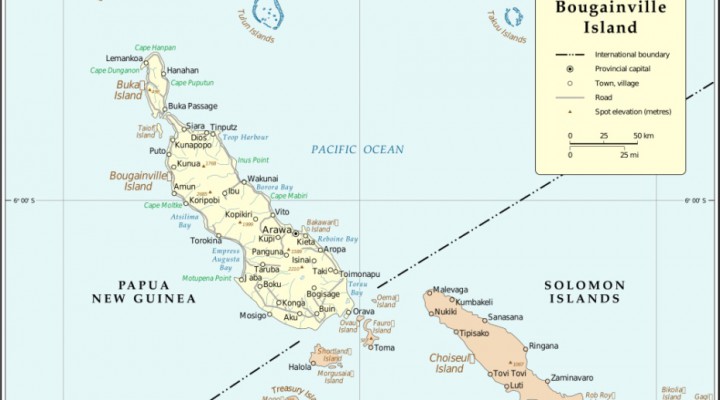 Bougainville, which possesses significant natural resources in copper and gold, is more prepared for independence than were current Pacific region members of the UN, including Tuvalu, Niue, and Kiribati, Wayne Madsen asserts.

There was a time when it was not unusual for the United Nations to accept several new members in a single decade. These days such accessions to membership are rare. The last nation to be admitted to the UN was South Sudan, the only new member in the international organization in this decade. The 1950s saw the UN gain new members in Europe, the Middle East, and Asia. The 1960s was the largely the decade of Africa in new members. During the 1970s and 80s, several island nations in the Caribbean became UN members. With the end of the Cold War and the appearance of newly-independent nations in Eastern Europe and Eurasia, the 1990s saw the largest increase in UN members since the 1960s. In 1992, alone, thirteen new members were admitted to the UN. The 2000s, on the other hand, saw the smallest increase in UN membership since the founding of the organization in 1945.

During the last two decades, the UN has admitted only four new members. However, that does not mean that there is a paucity of aspirant nations seeking to join the world body as full members of the international community of nations.

Were it not for the intransigence of Euro-Pacific powers that insist on continued colonial domination of the island territories of the Pacific – namely, Australia, New Zealand, France, and the United States – the UN would have attained a number of new member states from the South Pacific region.

If various nations abide by their past promises, the island of Bougainville, which recently held a referendum that saw an overwhelming 98.31 percent of voters opt for independence, should become, at some point during the next few years, the 194th member of the UN. Ever since 2001, the people of Bougainville, who fought a deadly civil war against Papua New Guinea – the governing neo-colonial power – have been promised by various foreign leaders that the results of the referendum would be respected. So far, the various parties with an interest in the region, have shown signs of reneging on the promise of independence for the 300,000 people of Bougainville.

Papua New Guinea prime minister James Marape is currently reminding Bougainville that the November-December 2019 referendum was non-binding on Papua New Guinea. Former Irish Prime Minister Bertie Ahern, the chairman of the Bougainville Referendum Commission, stated, upon the announcement of the referendum’s results, that Bougainville is not prepared for independence. In fact, both Marape and Ahern are taking their cues from the Pacific region’s self-declared overseers in Australia, New Zealand, and the United States. These three nations decided to walk back earlier promises that the will of the people of Bougainville, as expressed by the outcome of the independence referendum, would be respected. There is a fear by the neo-colonial ANZUS powers that an economically powerful China, always looking to establish closer diplomatic and economic ties with the island states of the Pacific, will establish a foothold in an independent Bougainville.

Bougainville, which possesses significant natural resources in copper and gold, is more prepared for independence than were current Pacific region members of the UN, including Tuvalu, Niue, and Kiribati. The argument by Ahern and Marape that Bougainville is unprepared for independence simply holds no water. For his part, Marape is keenly aware of nascent secessionist movements in East New Britain, Enga, New Ireland, Milne Bay, Hela, and Manus and he is in no hurry to allow Bougainville to go it alone.

In November 2018, France, adhering to the Noumea Accord of 1998, staged an independence referendum in its overseas territory of New Caledonia, which the indigenous population calls Kanaky. Due to the fact that a large number of ethnic European French Caldoches were allowed to vote in the referendum, independence was soundly defeated by a 56.9 percent majority. The actual reason why France will do anything to maintain control of New Caledonia is the fact that the island possesses some 25 percent of the world’s nickel resources. If it were not for the strategic importance of the West controlling the copper and nickel resources of Bougainville and New Caledonia, respectively, the two territories would have become members of the UN long ago.

New Zealand’s two self-governing territories, the Cook Islands and Niue, have expressed an interest in UN membership. However, New Zealand has rejected these proposals. So far, the Cook Islands and Niue have only been able to become full members of the World Health Organization, UN Educational, Scientific and Cultural Organization (UNESCO), and the Assembly of States of the International Criminal Court.

The last decade should have seen more than one newly-independent state join the UN. There is no reason why the current autonomous government of Bougainville could not have been granted full independence and applied for membership in the UN as its 194th member state after its overwhelming vote for independence. Similarly, if the Cook Islands and Niue are permitted to cut their apron strings to New Zealand and join the UN, they would be its 195th and 196th members. If the West’s neo-colonial stranglehold on the Pacific region were to be lifted, the total number of UN member states might be approaching 200, adding to the diversity and representation of the world body.

0 thoughts on “Will Bougainville Become the UN’s 194th Member State?”