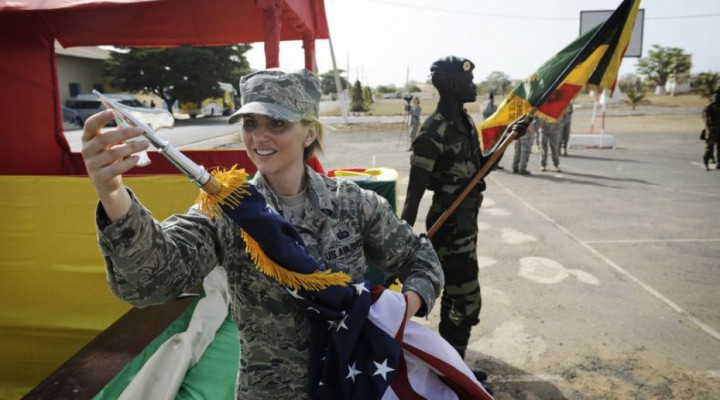 Although Donald Trump can barely place a single country in Africa, his few utterances on the continent have yielded what can only be described as a nostalgia for the 1960s. It was a decade that saw three white minority-ruled governments ruling in South Africa, Rhodesia, and the South African territory of South-West Africa.

Although Donald Trump can barely place a single country in Africa, his few utterances on the continent have yielded what can only be described as a nostalgia for the 1960s. It was a decade that saw three white minority-ruled governments ruling in South Africa, Rhodesia, and the South African territory of South-West Africa. All three white-ruled entities practiced varying degrees of apartheid. This was accomplished through economic, social, and political means.

In January 2018, when Trump referred to African nations as “shithole countries,” he was relishing the time when apartheid South Africa, Rhodesia, and South-West Africa were considered a pro-US bloc in southern Africa. The links between southern Africa’s exiled black African liberation political parties and movements to Communist- and Marxist-ruled nations, in the minds of Trump and his equally right-wing father, Fred Trump, Sr., made South Africa, Rhodesia, and South-West Africa model nations in the eyes of the Trumps.

Trump’s sympathies for the apartheid countries were crystal clear when, on August 22, 2018, Trump tweeted: “I have asked Secretary of State Pompeo to closely study the South Africa land and farm seizures and expropriations and the large scale killing of farmers. ‘South African Government is now seizing land from white farmers.’”

The South African government was keenly aware that Trump was using a trope from the apartheid era. White South African prime ministers, including John Vorster and P. W. Botha were fond of warning their own constituencies, as well as the West, that if blacks achieved majority rule in South Africa, white farmers would be massacred and their land expropriated. These were fear tactics, pure and simple. Mr. Trump, caught in some sort of time warp, continues to believe the apartheid propaganda.

In response to Trump’s tweet, the government of South African President Cyril Ramaphosa hit back at Trump: “South Africa totally rejects this narrow perception which only seeks to divide our nation and reminds us of our colonial past.” It turns out that Trump got his idea that the South African government was seizing land from white farmers from the disreputable Fox News. As for the claim that white farmers were being killed, that bit of bogus information came from a far-right group called AfriForum, consisting of mainly Afrikaners in South Africa and abroad.

The AfriForum disinformation about white-owned farms and farmers in South Africa was picked up by Trump through Fox News’s Tucker Carlson. Carlson’s father, Dick Carlson, was President Ronald Reagan’s chief propagandist as the director of the US Information Agency (USIA), since closed down. During 1985 and 1986, Dick Carlson ensured that a steady stream of right-wing propaganda emanated from the Voice of America, the anti-Cuban Radio Marti, and other platforms. This included support for apartheid South Africa. Other top Republicans involved in pro-South African propaganda included disgraced Republican Party lobbyist Jack Abramoff and Republican activist Lewis Lehrman. In 1985, USIA and the Voice of America, at Carlson’s direction, highlighted an anti-Communist summit meeting held in Jamba, Angola. The summit, called the “Jamboree in Jamba,” was attended by Abramoff, the Angolan UNITA rebel leader Jonas Savimbi, Nicaraguan Contra leader Adolfo Calero, Laotian Hmong leader Pa Kao Her, and Afghan Mujaheddin leader Abdul Rahim Wardak. Also present was Reagan National Security Council official Marine Lieutenant Colonel Oliver North, as well as South African and Israeli representatives. The South African Defense Force provided the security for the summit. Based on the success of the Jamba summit, the Republican right-wing even had hopes of restoring a proto-colonialist administration in Mozambique, the former Portuguese colony. By attempting to create a RENAMO-led government in Mozambique, the right hoped many Portuguese exiles could return to Mozambique to hold key positions in government and commerce. This, of course, was the same thinking behind the right’s support for Savimbi’s UNITA forces in Angola, also a former Portuguese colony.

One of the US groups backing the apartheid South African government was the Committee on the Present Danger, a fervently anti-Communist group. Extinct since the end of the Cold War, the Committee recently enjoyed a resurgence in Washington under the auspices of Trump’s former chief strategist Steve Bannon, Texas Republican Senator Ted Cruz, and former US House of Representatives Speaker Newt Gingrich.

In the 1980s, it was clear that far-right elements in the Reagan administration were trying to shore up white-rule in South Africa, prevent total black rule in South-West Africa, and roll back rule by Robert Mugabe in Zimbabwe – the former Rhodesia. The racist right-wing in the United States had hoped to prevent Mugabe from coming to power in June 1979 by backing the creation of a post-minority rule country called Zimbabwe Rhodesia. The use of the name Rhodesia was a concession to the white minority in the country, which, upon unilateral independence in 1965, was headed by Prime Minister Ian Smith. Smith was a hero to the far-right elements in the United States, including the Ku Klux Klan. Smith and his allies in South Africa decided the best way to maintain the status quo was to form an alliance with Rhodesian tribes opposed to Mugabe, including Ndebele leaders like Joshua Nkomo.

The first Prime Minister of Zimbabwe Rhodesia was Bishop Abel Muzorewa, who, like Mugabe, was a member of the northern Shona tribe. Muzorewa was an opponent of Mugabe as were other officials in the short-lived Zimbabwe Rhodesia, sometimes called “Rhobabwe.” Smith continued in the government as a minister without portfolio. White Rhodesians continued to serve as ministers of finance, justice, agriculture, and finance. When Britain re-established control over Zimbabwe Rhodesia and changed its name to Southern Rhodesia in December 1979 the writing was on the wall for the white-black coalition government. In 1980, Mugabe became prime minister of Zimbabwe. In the subsequent years, many white Rhodesians fled to South Africa, the United States, Canada, and Australia.

In 2015, Dylan Roof, the US white supremacist who massacred African Americans in a Charleston, South Carolina church, appeared on a website called “The Last Rhodesian” wearing a jacket emblazoned with the flags of Rhodesia and apartheid South Africa. Rhodesian expats have also been involved with several racist groups around the world, including Australia, Canada, Britain, and New Zealand. Donald Trump has rekindled hope among these stubborn nostalgists for white rule in southern Africa that what once seemed impossible is now quite thinkable: white-dominated governments in Harare, Pretoria, and Windhoek.

A similar situation was attempted by promoters of white rule in South-West Africa. In 1977, the Democratic Turnhalle Alliance formed a de facto government in Windhoek led by Dirk Mudge. Mudge, an Afrikaner, governed with the support of South Africa and representatives from various ethnic groups, including the Ovaherero, Coloureds (mixed race), Tswana, Damara, a few Ovambo, Caprivians, Nama, Kavango, San, and White Afrikaners and Germans, the latter concentrated on the coast around Swakopmund. The United Nations refused to recognize the Turnhalle government, opting for the exiled South West African People’s Organization (SWAPO) of Sam Nujoma, which was heavily supported by a majority of the Ovambo people. The attempt by whites and their allies to prevent Nujoma from becoming president of independent Namibia ultimately failed.

Thanks to social media, a de facto alliance of exiled white Rhodesians, South Africans, Nyasalanders (now Malawi), and Namibians, along with racists in Europe, North America, and Australia, see – with Trump as president of the United States and the equally racist Jair Bolsonaro as president of Brazil – an opportunity for them to set the calendar back to the 1960s. Just as minority white leaders like Smith, Vorster, Botha, and Mudge attempted to seek alliances of convenience with various African ethnic groups to maintain ascendancy – the Ndebele, Zulu, Venda, Tswana, Damara, and Ndau, among others – Trump, Steve Bannon, former Ku Klux Klan leader David Duke, and about a dozen hard right Republican members of the US Congress are hoping to restore de facto white rule in southern Africa.

Since Trump’s “Make America Great Again” trope has become a racist mantra, so, too, have merchandise bearing mottos like “Make Zimbabwe Rhodesia Again,” “Make Afrikaners Great Again,” and “Make Namibia German Again.” Some whites with roots in Malawi, where the second largest city is Blantyre – named after the town of Blantyre in South Lanarkshire, Scotland – would not mind it if they again enjoyed high positions of influence in the country formerly known as Nyasaland. Some of the descendants of the 75,000 whites who formerly lived in Northern Rhodesia, now Zambia, also pine for the days when whites ruled the country. Afrikaner nationalists also recall with fondness the desire of apartheid South African Prime Minister Hendrik Verwoerd wanting to turn Bechuanaland (now Botswana), Basutoland (now Lesotho), and Swaziland (now eSwatini) into South African ruled dominions.

Creation of a South Atlantic Treaty Organization (SATO) has long been a goal of neo-conservatives like John Bolton, Trump’s National Security Adviser, and Elliott Abrams, Trump’s “special envoy” for Venezuela. In March 2019, Trump, restarting this goal of the Reagan and Richard Nixon administrations, said during the visit of Bolsonaro to the White House, “I also intend to designate Brazil as a major non-NATO ally, or even possibly—if you start thinking about it—maybe a NATO ally.”

Pleased with the 1970s success of Operation Condor, an intelligence alliance of Latin American military dictatorships that targeted for assassination and arrest leftists in South America and beyond, Secretary of State Henry Kissinger foresaw a military alliance of the Condor partners of Argentina, Brazil, Chile, and Uruguay, along with apartheid South Africa and the United States, as firmly extending US military control over the south Atlantic region. Kissinger’s plan for a SATO continued under Reagan. One Reagan administration policy paper was titled “The Security of the South Atlantic: Is It a Case for ‘SATO’–South Atlantic Treaty Organization?” Just as with Trump and Bolsonaro today, in 1984, Reagan and Brazilian President João Figueiredo, Brazil’s last military dictator, had talks on the formation of SATO.

Influenced by the neo-cons in his administration, Trump was recently asked about Africa policy. Trump responded, “We’re looking at Zimbabwe right now.” Just as with the right-wingers gathered at the Jamba Jamboree in 1985, Trump and his racist supporters are looking at Zimbabwe in order to restore something akin to Rhodesia and get the ball rolling on the restoral of white rule and privilege throughout southern Africa and forcing many blacks back to their rural tribal kraals. Trump’s neo-con allies may seek to create a SATO, but the racist elements in Washington want it to be a military club for white governments. Those who sacrificed so much to eliminate the scourge of apartheid and colonialism from southern Africa should be on constant guard against the plans of Trump and his southern African and Brazilian allies. The United States under Trump is a distinct neo-colonialist enemy of the black African people.