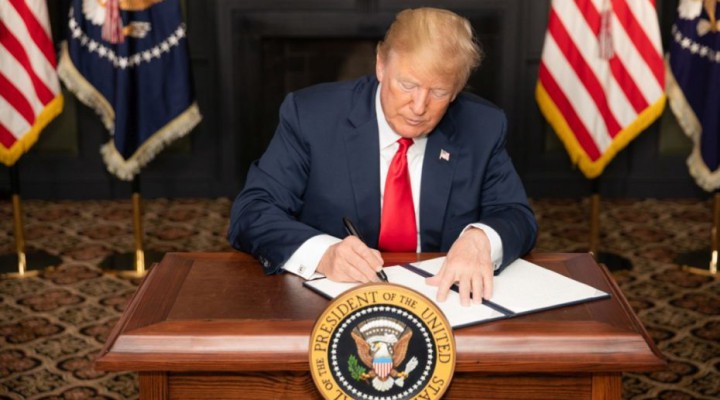 Donald Trump’s decidedly neo-conservative administration is waging economic warfare through the combined imposition of tariffs and economic sanctions against nations on six continents.

Donald Trump’s decidedly neo-conservative administration is waging economic warfare through the combined imposition of tariffs and economic sanctions against nations on six continents. Trump’s policies, which fuse bull-headedness with oafishness, have wreaked havoc on the stock market, pension funds, employment, and overall economic stability on a scale not seen since the Great Depression of the last century.

For the last several years, the United States imposed crippling economic sanctions on Zimbabwe to force long-reigning president Robert Mugabe from power. The Washington “regime change” industry received what it wanted in November 2017 when Mugabe resigned from office amid popular street protests. Emmerson Mnangagwa succeeded Mugabe as president, expecting the US would drop its sanctions on the Harare government. Not satisfied with the removal of Mugabe from power, the Trump administration recently announced that it was extending sanctions on Zimbabwe for another year, citing Mnangagwa’s government as a threat to US security interests in Africa.

Donald Trump, who has labeled African nations “shitholes,” will not be satisfied until all of Africa consists of Washington’s client states, voting in lockstep at the United Nations for US and Israeli interests. The extension of US sanctions against Zimbabwe bears the watermark of Trump national security adviser John Bolton, who developed a pathological hatred for countries like Zimbabwe, which regularly denounced US policies in the UN and other international forums.

Although Zimbabwe has implemented electoral reforms, committed itself to recognizing human rights, and improved press freedoms in the country, it is not enough for the firmly neo-con Trump administration. The Trump administration insists that Mnangagwa’s victory in last July’s presidential election was flawed, even as Trump and the completely “Trumpified” Republican Party faces legitimate charges of voter intimidation, election fraud, and other election malfeasance across the United States.

The Trump administration’s sanctions against Zimbabwe come after increased US sanctions against the Venezuelan government of President Nicolas Maduro. These sanctions, which include asset freezes and travel bans on Venezuelan officials, may be expanded to include individuals and entities with ties to the Maduro government. There is already a move afoot among Trump’s neo-cons to expel Maria Gabriela Chávez, the daughter of the late Venezuelan President Hugo Chavez, from New York, where she serves as an alternate ambassador to the UN The Trump administration is also considering freezing Ms. Chavez’s financial assets in New York, including bank accounts. Such steps would mark a violation of the US-UN Treaty and provide an additional reason for the UN to move its headquarters from New York, where Trump enriches himself from the high rents some UN permanent missions pay the Trump Organization for offices in Trump-owned buildings.

Expanded US sanctions would be directed against Venezuela’s remaining allies in the region, including several Caribbean island nations. The US was already caught red-handed in Haiti, where a team of US mercenaries – some tied to the former Blackwater firm founded by Trump unofficial foreign policy adviser Erik Prince – were arrested during protests in Port-au-Prince. The American mercenaries were armed and had advanced communications equipment. They were eventually deported to Miami after the Trump administration applied pressure on Haitian President Jovenel Moïse, who has varied between neutrality on the Venezuela situation or has thrown his support to Maduro.

The Trump administration, with Iran-Contra convicted felon Elliott Abrams steering US policy toward Latin America, is advancing the cause of Venezuela’s opposition National Assembly president, Juan Guaido. The US-supported opposition’s claimant to the Venezuelan presidency, Guaido, who is 35, suddenly appeared on the Venezuelan political scene in a manner not unlike the rise of virtually-unknown Nicaraguan Contra leaders, many recruited by Abrams and his criminal co-conspirators from Nicaraguan exiles in Florida who were involved in money laundering and drug smuggling. There have been various reports that Guaido served as a “rent boy” in Venezuela before rising in politics to become the North American-recognized president of Venezuela. Whether Guaido sold his body or soul for money, he remains controlled by same sort of right-wing Latin American diaspora of oligarchs, millionaires, and drug smugglers who once supported the Contras and make Florida their home.

The Trump administration falsely accused Venezuela of being a “narco-terrorist state,” when that appellation is more correctly bestowed on Colombia, where narco-terrorists, including former Presidents Alvaro Uribe and Andreas Pastrana, have used their ill-gotten cash to join Palm Beach, Florida’s Mar-a-Lago club, Trump’s seaside luxury club for billionaires and multi-millionaires.

The Trump administration has also tightened the draconian US embargo on Cuba over Havana’s continued political support for Venezuela. Bolton added Nicaragua to the US sanctions list, applying asset freezes and visa bans on officials of the government of President Daniel Ortega. Ideally, the Trump regime would like to sweep away all Latin America’s socialist governments and replace them with US client states. Bolton has referred to Venezuela, Cuba, and Nicaragua as the “troika of tyranny,” while cementing US ties with fascist-oriented leaders in Brazil, Colombia, Argentina, Honduras, and Guatemala.

Trump’s retrogressive policies across the board – sanctions, embargos, asset freezes, and punitive tariffs have not only destabilized the economies of Latin American, Asian, and African countries, but also wreaked havoc on the agricultural sectors of the United States and the travel, tourism, and financial service industries of Florida, Puerto Rico, and the US Virgin Islands. US sanctions on Venezuela have harmed the economies of Trinidad and Tobago, Guyana, and the Eastern Caribbean states, all reliant on close financial ties with Caracas.

Trump’s bellicose orders barked out to other countries not to purchase Iranian or Venezuelan oil have resulted in an unstable oil market and wild fluctuations in prices. This has a domino effect on other economic sectors. Bolton has warned India not to buy either Iranian or Venezuelan oil. India and Iran have irked Bolton and his neo-con colleagues by continuing to recognize Maduro as Venezuela’s president.

Trump sanctions on Iran have resulted in the inability of Iranian hospitals and doctors to import needed medicines and other health care items. This has been repeated in Venezuela. Trump revels in bringing misery and pain to individuals affected by his savage economic warlord policies. Such beasts as heads of state have existed, but in countries like the former Zaire, Kampuchea, and Central African Empire, Equatorial Guinea, Taliban-ruled Afghanistan, and Uganda.

Punishing US trade tariffs against China, Mexico, Canada, Europe, and other countries, coupled with sanctions against Iran, Cuba, Syria, Russia, Belarus, Venezuela, Nicaragua, Sudan, Zimbabwe, North Korea, Bosnia and Herzegovina, Myanmar, Iraq, Yemen, Burundi, Qatar, Kuwait, Lebanon, Crimea, Eritrea, Lebanon, and Cyprus are arcane and destabilizing. Mr. Trump may believe he has the authority to wield his economic warfare scepter at will and without thought to the ramifications of his policies, but the world is increasingly learning how to bypass Mr. Trump’s Washington and conduct their international relations without Trump’s foul breath on their necks and shoulders. Mr. Trump’s nepotistic kakistocracy has already seen he and his henchmen, people like Treasury Secretary Steve Mnuchin, Commerce Secretary Wilbur Ross, and Secretary of State Mike Pompeo grant exemptions to Trump’s sanctions and tariffs when they personally benefit Trump and his family’s businesses. That will all be considered when long-overdue articles of impeachment are finally submitted against Trump by the US House of Representatives.

0 thoughts on “Trump: The Warlord of Economic Savagery”