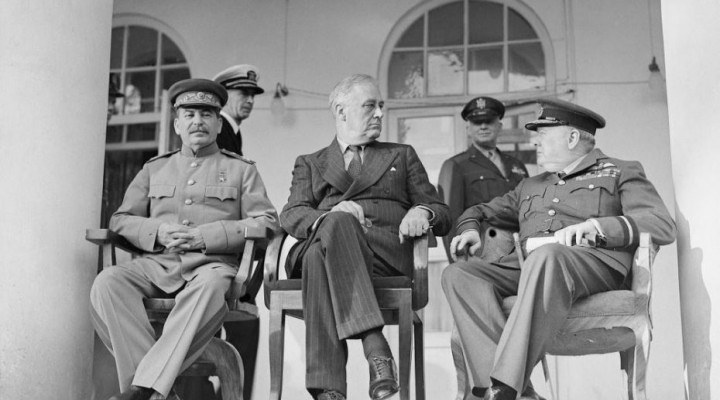 In an age of rapid information exchange and ubiquitous mass media operations and options, the world has never before seen anything approaching the current global leadership deficit.

In an age of rapid information exchange and ubiquitous mass media operations and options, the world has never before seen anything approaching the current global leadership deficit. During the World War II years, the forces of fascism were defeated because there were Allied leaders who exercised the leadership qualities necessary to rid the world of Nazi Germany and Imperial Italy and Japan.

Out of the wartime armies and governments emerged a new set of leaders who would help create and nurture the United Nations and keep the post-war world from annihilating itself with nuclear weapons. General George Marshall would emerge as President Harry S Truman’s Secretary of State. General Dwight D. Eisenhower would be elected President of the United States and serve an eight-year term, passing the torch to a World War II Navy Lieutenant named John F. Kennedy. Soviet Field Marshal Georgy Zhukov would serve in the Soviet Politburo and as Minister of Defense. De Gaulle would see France through as its president during the upheavals of the 1940s, 50s, and 60s. Jinnah became the founding leader of Pakistan, while Mao Zedong became the founder of the People’s Republic of China. Papandreou battled against the Greek military’s influence over his country’s affairs until the 1967 military coup and the imposition of a dictatorship.

Three successive United Nations Secretaries General – Trygve Lie of Norway, Dag Hammarskjold, and U Thant – used their offices to promote peaceful dialogue over war. Hammarskjold would pay with his life while trying to negotiate an end to the Congolese civil war.

Whether they were former military commanders or wartime government officials, the post-war years produced the individuals who would help guide colonies to independence in Africa, Asia, the Caribbean, and the Middle East. The leadership of the Non-Aligned Movement would offer the world a third choice between the capitalist West and the Communist Bloc. At the 1955 Asia-Africa conference in Bandung, Indonesia, heads of state and prime ministers of newly-independent nations, exhibiting statesmanship and leadership, declared in a single voice that they would abstain from the “use of arrangements of collective defense to serve the particular interests of any of the big power.” That sent a clear and unambiguous message to Cold Warriors like US Secretary of State John Foster Dulles that the non-aligned states would not be part of a ring of military pacts Washington was establishing around the world, including NATO, SEATO, and CENTO. For his part, Marshal Tito of Yugoslavia, was declaring that his country would not be a participant in the Soviet Union’s Warsaw Pact. Tito, along with Indian Prime Minister Jawaharlal Nehru, Indonesia’s President Sukarno, Egyptian President Gamal Abdel Nasser, and Cuban leader Fidel Castro represented a third force and strategic buffer between the two nuclear superpowers of the United States and Soviet Union.

European and other leaders also showed their knack for diplomacy to tamp down the desire by some for nuclear brinkmanship and war. These included West German Chancellor Willy Brandt, who established the policy of “Realpolitik” with the Soviet Union and East Germany. British Prime Minister Harold Wilson and Canadian Prime Ministers Lester Pearson and Pierre Trudeau refused to have their nations drawn into the American-led war in Southeast Asia. French Presidents Georges Pompidou and Francois Mitterand continued de Gaulle’s policy of keeping France outside of the military command structure of NATO. Jimmy Carter put a new emphasis on worldwide human rights. Soviet leader Mikhail Gorbachev introduced the policies of “perestroika” and “glasnost.”

After the end of the Cold War, something occurred that would severely diminish the leadership quotient in global politics. Instead of electing statesmen and effective political leaders to office, several countries began opting for entertainment and media celebrities, many of them buffoonish demagogues, to be their new leaders. Other bureaucratic leaders decided to be guided in their decisions by opinion polls rather than by the leadership instincts that guided the policies of those like Eisenhower, Kennedy, Soviet Premier Nikita Khrushchev, de Gaulle, the early Non-Aligned Movement leaders, and others.

The age of the buffoonish strongman began in Italy when the country’s richest man, media mogul Silvio Berlusconi, became prime minister in 1994. But one can go back to the 1980s and the US presidency of B-movie actor Ronald Reagan to see where the blending of celebrity and politician began.

The elevation of the boorish Berlusconi to the head of the Italian government was likened to the sacking of Rome by Germanic tribes in the waning days of the Roman Empire. Berlusconi packed the Italian government with his political cronies, even appointing his personal tax attorney, Giulio Tremonti, as finance minister. Neo-fascist supporters of wartime fascist leader Benito Mussolini were commonplace in Berlusconi’s government. Berlusconi consistently lied to the Italian people with the belief that the truth was whatever he said it was. Berlusconi questioned the patriotism of anyone who disagreed with him. Disobedient parliament members of his own party were considered “traitors.” Berlusconi eventually became embroiled in financial and sex scandals, including the charge that he had sexual trysts with underage females at his infamous “Bunga Bunga parties.” Amid a financial crisis in Italy, Berlusconi was forced to resign in 2011. In July 2019, Berlusconi’s political career resumed with his taking a seat in the European Parliament.

Berlusconi led the way for other right-wing media-savvy celebrities taking power. In other cases, right-wing politicians began fancying themselves as comedians. In the first category, the world saw Jimmy Morales, a television comic who liked to appear in “blackface,” elected president of Guatemala in 2016. Morales ran on a platform of clean government. It was not long before he faced charges of accepting illegal campaign donations.

This year, Volodymyr Selensky, a Ukrainian comedian, was elected president of Ukraine. It is no joking matter, however, that the Jewish president of Ukraine governs with the support of neo-Nazis who honor such Nazis as Stepan Bandera and Adolf Hitler.

Icelandic comedian Jon Gnarr was elected mayor of Reykjavik in 2010 and he may be in line for a role in national politics in the future, including as president of Iceland. Italian comedian Beppo Grillo, as head of the Five Star Movement, controls one of the two major parties in the Italian coalition government. Grillo’s comedic acts featured a lot of profanity – something he shares with Berlusconi and a certain reality television star who now occupies the White House.

Marjan Šarec is the prime minister of Slovenia. He is also a well-known comic and impressionist, whose specialties included Osama bin Laden and Fidel Castro. Another comedian, Hayk Marutyan, is the mayor of Yerevan, Armenia who is talked about as a future national leader.

US Democratic Senator Al Franken, a former television comedian, was run out of office by New York Senator and presidential candidate Kirsten Gillibrand in a melodramatic “#MeToo” jihad designed to boost Gillibrand’s presidential hopes. In what could some from a TV soap opera script, Gillibrand made no mention of her family’s connection to a criminal New York woman sex slave cult called NXIVM.

Today, former Daily Telegraph and Times of London journalist and London mayor Alexander Boris de Pfeffel Johnson is the prime minister of the rapidly disintegrating United Kingdom. Johnson’s full name could have been featured in a Monty Python sketch. Johnson’s unkempt blond hair and political views have resulted in him being called “Britain’s Trump,” even by Donald Trump. Johnson can be summed up by what his political opponents have called him: jester, toff, self-absorbed sociopath, wannabe comedian, serial liar, oafish, nasty, horrid, right-wing elitist, Donald Trump with a thesaurus, and a friend of criminals.

Finally, we come to the leader of the so-called “Free World.” Donald Trump and his circus clown celebrity friends around the world, who also include a politically refurbished Berlusconi, Nigel Farage, Rodrigo Duterte, Jair Bolsonaro, and Binyamin Netanyahu, are in their own world, one of constant insults, personal threats, gaslighting, projection, and buffoonery. During a recent White House meeting with another celebrity, Pakistani Prime Minister Imran Khan, a famed cricketeer, Trump said of the Afghan conflict, “If I wanted to win that war, Afghanistan would be wiped off the face of the earth… It would be over in literally, in 10 days… I just don’t want to kill 10 million people.” Khan was not laughing, and, except for Trump’s circle of clowns, neither were the rest of us.