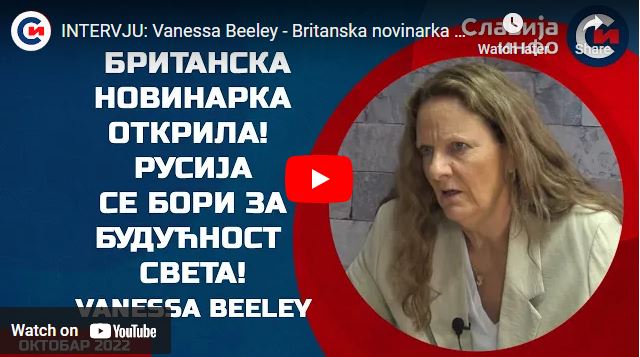 Dragana Trifković, Director of the Center for Geostrategic Studies, Master of Science in Security Management, University of Belgrade sat down for a conversation with me back in June this year when I was visiting Belgrade.

I include this excerpt from one of her articles for ‘Friends of Crimea’:

“The process of transforming the monopolar world order into a multipolar, after the conflict in Ukraine, will enter a new phase. The United States, as one (but no longer the only one), of the world’s leading powers, seems to have no strategy that fits in with global trends. In the American strategic documents that determine the foreign policy doctrine, there is the idea of ​​returning to world domination, which would literally mean redirecting global processes in the opposite direction. In the current circumstances, such an idea seems unrealistic, especially if we take into account the fact that the United States no longer has the political, economic or military capacity to implement it. The redistribution of world power has led to China’s economic dominance, as well as Russia’s military dominance.

The once strong unity of the Western powers has turned into a loose alliance in which there is an increasing stratification between the interests of the United States, Great Britain, Australia and Canada on the one hand, and the EU on the other. When we talk about the EU, it is obvious that there is no unity of member states in the Union on many issues. The most important world currents are resolved primarily in the triangle of relations between the United States, Russia and China, while the role of the EU in world currents is no longer the same level as before.

In this regard, the EU, which is firmly attached to the United States, is in danger of becoming collateral damage in the conflict of interests of the United States on the one hand and Russia and China on the other.”