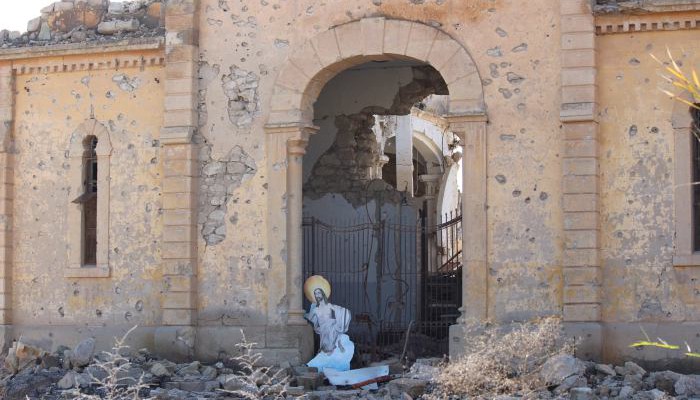 My talk that was scheduled to be given at the seventh Christian Conference held in Moscow on 24th October. Unfortunately I was unable to travel but they still published my talk in the final programme:

My name is Vanessa Beeley, I am an independent investigative journalist who has worked on the ground inside Syria since 2016. I have been present during the majority of military operations to liberate cities and regions from the occupation of extremist armed groups sponsored by the US-led coalition whose agenda from the beginning has been regime change and destabilisation of a progressive and stable sovereign nation (prior to 2011).

I received this doc issued by the Sharia court in 2013 in Raqqa. The NATO backed terrorists forced a Syrian (Christian) family to sell their home for -$5000 and kicked them out of the city. The family is now homeless, living in a shared apartment with 4 other families in Aleppo. pic.twitter.com/8Ibge3JZmn

My focus today is on what appears to be the deliberate ethnic cleansing of Christian communities from Syria and the region which has been ongoing since the externally orchestrated “uprising” erupted in Syria in 2011. This exodus of Christians is quite simply catastrophic for Syria as it alters the historic demographic and uproots one of the most important pillars of Syrian cultural diversity and heritage.

It is estimated that less than 700,000 Christians remain in Syria, less than 4% (reduced from 10%) of a 19 million population also itself decimated by forced displacement by the invasion of armed mercenaries and terrorist groups that are being funded, armed and promoted by the US Coalition media as “moderate rebels”. Christian communities have been targeted and persecuted mercilessly – from Aleppo to Damascus and beyond.

I was present in areas of Aleppo, historically Christian quarters, when the Nusra Front-dominated armed groups in East and West Aleppo fired hell cannon mortars, explosive bullets and rockets into residential areas killing and maiming civilians, including children. The armed groups gradually encroached into these areas, sniping residents as they advanced and drove people from their homes. According to faith leaders in Aleppo, 75% of Christians from the city have fled outside Syria to escape the threat of genocide by the NATO-backed armed groups. What happened in Aleppo happened throughout Syria and it is believed that 60% of Christians have been displaced from Syria.

Syria’s Christian tapestry comprises Eastern Orthodox, Melkite Catholic, Syriac Orthodox, Armenian Apostolic, Protestants, Anglicans, Assyrian, Chaldean Catholic and these communities have historically been targeted in the region by the Ottoman Empire, most notably in 1840, 1860 and during the Assyrian genocide/Sayfo of 1915. Turkey, a NATO member state, is once again responsible for ongoing attacks on Christian communities particularly in the North West, Idlib, and in the North East also under illegal occupation by the US and their Kurdish separatist contras.

Turkey, under Erdogan, has provided air cover (drones), military and surveillance support to the sectarian extremist groups that are systematically destroying Syrian Christian towns and villages, desecrating churches, stealing artefacts and crucifying, executing and massacring Christian residents of the areas they invade and occupy.

@Charles_Lister That's me at entrance to Al-Quneyah and in Yacoubieh. Used to attend mass at same Church. Most of the Christian residents of the two sister villages had to flee after your FSA and Annusra occupied them. Cross+Virgin Mary statue removed. very few stayed pic.twitter.com/LcpFPTPRtW

In 2019, I interviewed an Armenian Christian refugee from Yakubiyah a predominantly Syrian Christian town (Armenian and Catholic) west of Idlib City and approx 10 km from the border with Turkey. Her name is Aline K. Aline informed me that residential homes had been forcibly seized and occupied by the militant gangs when they invaded the town. Houses and churches were looted and desecrated. Christian women were forced to wear the hijab. Many of the young people fled, leaving behind only the elderly who were physically not able to leave or refused to abandon their homes.

Crosses and statues of saints were destroyed on this historic church where the lovely White Helmets are watering the plants … nice of them. pic.twitter.com/DY5QWK7Njo

Aline told me that a group known as the White Helmets began to appear alongside the armed groups in 2015.

“They established their center in a complex of school and church buildings. When they arrived they were dressed like the terrorists, you couldn’t tell them apart but the White Helmets are a subsidiary of the terrorist groups. Most of the White Helmets were Syrian but the situation was chaotic, we didn’t know who was who, there were many foreigners among them. They (White Helmets and terrorists) left nothing untouched or unbroken. They were like locusts, they left no tree or building untouched. They stole our livelihood, our trees. They destroyed everything, reduced it to trash, our homes, our buildings, all destroyed.”

In July 2019, Suzanne Der Kirkour, a Syrian Christian woman was tortured and raped repeatedly by Al Qaeda terrorists before being stoned to death in Yaquibiye, Idlib. Suzanne was 60 years old, she had asked the terrorists to leave her farmland which triggered this barbaric attack and murder.

The White Helmets are a British/US intelligence creation. Founded in 2013, in Turkey and Jordan, by a former British military intelligence operative, James Le Mesurier, they work exclusively with the extremist armed groups in Syria, dominated by Al Qaeda, ISIS and affiliates. A recent leak of UK Foreign Office documents exposed the extent to which the British government ran million-pound media and PR campaigns for the militant groups and funded the White Helmets to produce false reports and staged events designed to  criminalise the Syrian state, Russia and allies in order to manufacture consent for further proxy military intervention and economic terrorism – illegal unilateral sanctions.

The UK claims that it has provided 2.8 billion in “humanitarian aid” during the ten-year conflict, a conflict it has helped maintain since 2011. In 2019 alone, 150 million was poured into Idlib via the White Helmets and other UK FCDO-incubated so-called NGOs. A Dutch investigative report in September 2018 had already concluded that the White Helmets could not offer sufficient assurances that EU funding was not being siphoned to the armed groups including Al Qaeda. Despite this finding, the UK FCDO continued financing their outreach agents embedded with the aforementioned armed groups.

Since 2011, successive British neocolonialist regimes have professed a desire to “protect the most persecuted religious group in modern times”. According to former UK Foreign Secretary Jeremy Hunt – “there is nothing more medieval than to despise someone on the basis of their faith”. Former UK Ambassador to Syria, Peter Ford, responded to this statement:

“Nothing more medieval? ‘Medieval’ is a good word to describe the ideology of these armed groups as they single out Christian villages on the edges of Idlib for merciless shelling. There must be a special place in Hell for hypocrites like Hunt and Johnson who feign concern for Christians while supporting vile jihadi groups in Syria.”

In fact, Peter Ford and Reverend Andrew Ashdown, who has regularly visited Syria in order to give a voice to Syrian faith leaders, both denounce the British government for its lack of inclusion of Syrian Christian clergy opinions. Ashdown told me:

Ford made the same point – “Not only has the British government ignored Syrian Christians but it has tried to stifle their voice, by for example refusing visas for Syrian bishops to visit Britain just to put their case.”

Where, for example, are Hunt’s or Johnson’s condemnations of the massacre of civilians on a regular basis in the Syrian Christian towns of Al Sqeilbiyyeh and Mhardeh and villages in the surrounding countryside? These towns and villages are in the Syrian government-secured areas bordering Al Qaeda-dominated northern Hama and Idlib.

For eight years, these Syrian towns have been shelled and threatened with ethnic-cleansing invasion by the terrorist gangs marketed as “rebels” in the West and staunchly defended by Hunt and Johnson.

Women in these towns, wives, sisters, daughters of “martyrs” –the young men who have sacrificed their lives in the volunteer National Defence Forces to defend their communities against the sectarian hatred camped on their doorstep– have, themselves, taken up arms and trained as fighters to protect their people. The brutal gangs who would drive them from their homes and their land are, effectively, promoted and financed by the British government. As Ford says:

“It is the height of hypocrisy for the British government to affect concern for Christians when, in its obsession with overthrowing Assad, it has completely ignored the plight of Syrian Christians, who regard Assad as their sole bulwark against persecution. Worst of all, the British government continues to this day to support to the hilt jihadi groups in Syria”

While the UK regime claims it doesn’t directly supply weapons to the euphemistically labeled “Syrian opposition” – British MP Lloyd Russel-Mole begs to differ, accusing the UK FCDO of complicity in small arms and millions of rounds of ammunition mysteriously ending up in the hands of the extremist armed groups in Syria.

Christian military commanders who lead volunteer National Defence Forces that have been instrumental in protecting Christian towns like Sqeilbiyyeh and Mhardeh in northern Hama from US Coalition-backed genocidal armed groups are now being targeted by EU-funded and intelligence-linked media outlets threatening legal action against them and Christian NGOs who have stood in solidarity with their combat against the savagery of sectarian, extremist militias. Their crime? Defending their communities against extinction. They are being described as “war criminals” for doing so. I argue that the real war criminals are those countries enabling and power multiplying the mercenary Islamist forces intent on the destruction of Christianity in Syria and the region.

When the British regime vows to “protect persecuted Christians throughout the world”, they need to justify their support for the violent, armed sectarianism that is sweeping the Middle East. The responsibility for the eradication of regional cultural diversity lies with the British regime & members of the US-led neoconservative cabal. It is worth noting also the British regime bias against Syrian Christian refugees. Their excuse that “only 0.2% of Syrian Christian refugees have relatives in the UK”. Meanwhile members of the Al-Qaeda-linked White Helmets were given instant asylum in the UK after their evacuation (alongside armed group fighters and leaders) out of southern Syria facilitated by Israel. Did they all have relatives in the UK?

In May 2019, former Chancellor of the Exchequer, Sajid Javid, effectively offered 28 days amnesty for British terrorists fighting in Idlib. The same terrorists who will have ensured the continued persecution of Syrian Christians. In December

In December 2018, Jeremy Hunt commissioned an independent investigation into the rise of “Christophobia” –led by the Bishop of Truro– which was recently published. Peter Ford condemned the report for its failure to criticize the government “for all the support they have given to armed groups in Syria guilty of persecuting Christians”.

His Excellency, Jano Battah, Bishop of the Syriac Catholic Church, has said publicly that “were it not for the SAA and Russia we would have been slaughtered.”

Boris Johnson has “welcomed this review” and claims that he will “stand up for those facing persecution”. Well, why not start by lifting economic sanctions against Syria and ending the promotion and financing of the sectarian terrorist groups and their auxiliaries that are persecuting the Syrian people? As William Wilberforce, MP, said to the House of Commons with reference to the slave trade in 1791 – “you may choose to look the other way, but you can never again say you did not know.”