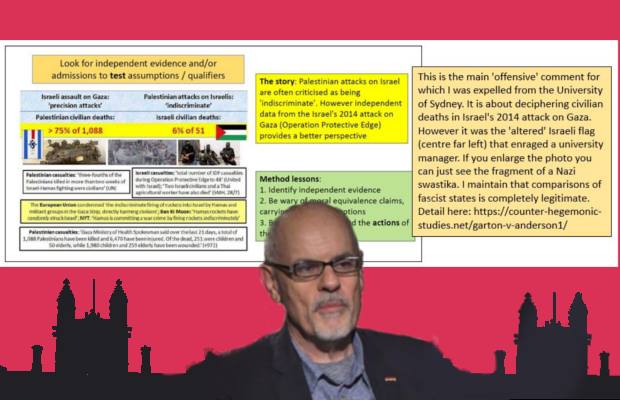 Statement in response to the Federal Court decision in NTEU and Anderson vs University of Sydney and others (attached below), 26 November 2020.

In a case brought against the University of Sydney by the National Tertiary Education Union of Australia (NTEU) and myself the Federal Court has decided to endorse ‘academic cancel culture’ where, after trolling by outside lobbies, university managers can give secret directions to academics to withdraw or modify not only their public comments but also their teaching and research materials.

Academic cancel culture works this way: (1) powerful lobbies use media allies to attack and abuse inconvenient academics, (2) corporate university managers, keen to protect their brand reputation, try to gag or modify the work of the targeted academic, and (3) conservative courts back the gag orders by reading down the right to intellectual freedom and reading up the right of managers to give orders.

In my case the issue was criticism of the endless Middle East wars, including the ethnic cleansing of Palestine. The Israel lobby was central to the pressure on university managers. No-one contradicted my excellent work record over 20 years. In the end all that mattered was ‘offence’ to Israel.

The court decided to read down the academic right to intellectual independence and read up the power of university managers to give secret orders to academics, treating them as simple ‘employees’.

I have enjoyed more than 30 years of intellectual freedom at Australian universities, but I could not maintain the intellectual integrity of my work under this sort of secret censorship regime.

Federal Court judge Tom Thawley had basically two options: the easy way was to endorse and deepen what the Federal Court in the Ridd case called “an employer’s common law right to give a reasonable and lawful direction” to employees; or a path that took a bit more courage, to say that an academic has the right to refuse management orders which interfere with his or her academic work.

Justice Thawley took the easy path. First, following the Ridd case (128), he rejected the idea that the ‘intellectual freedom’ clause of the Enterprise Agreement (USyd cl.315) created “an enforceable right to intellectual freedom”, which exempted it from claims of “misconduct”. Even in the case of “comments which were exercises of intellectual freedom”, the EA clauses did not “immunise” the academic from misconduct processes by University mangers (161, 163).

Second, he deferred to managerial prerogative, accepting the argument put by Kate Eastman, barrister for the University, that it was not for the court to decide on matters of actual misconduct. The judge wrote: “It is unnecessary for the court to state what conclusion it would have reached … it is sufficient to note that the view taken by Professor Garton was open and that his actually being satisfied was not directly challenged or shown to be affected by some vitiating error” (227, 233).

Finally, the judge relegated the academic role to that of an employee bound to follow orders. “An employee’s “duties” would include … the implied duty of fidelity and to obey the lawful directions of the employer .. a refusal to follow lawful directions … is capable of being “serious misbehaviour” of a kind that constitutes a “serious impediment” to carrying out one’s work (265).

The judgement does not seem easily reviewed and, in my opinion, without federal legislation, will do lasting damage to academic independence in Australia.

This decision does not affect me much. I can publish what I want and am invited to speak at universities around the world. I will resume online teaching soon. Those most affected will be the next generation of academics, especially those in controversial areas. They will have to worry that a manager may give secret censorship orders, fearing damage to reputation or finances.

Evidence produced in the case demonstrated that university reactions were driven by concern at ‘reputational damage’ and to control the political agenda. Knowing that I had publicly stated that there was “no moral equivalence” between the violence of the coloniser and the colonised, Provost Garton had insisted to me that I take an “even handed” approach to Israel and Palestine.

The final censure illustrates this well. A ‘Gaza Casualties’ graphics, demonstrating that most of the more than one thousand Palestinians killed by Israeli forces in a 2014 invasion were civilians, was singled out for its swastika fragment in the background which suggested that, in this racialised massacre, Israeli forces were acting like Nazis.

Provost Stephen Garton never acknowledged the slaughtered Palestinians; all that mattered was that those who slaughtered them would be offended. While the graphic showed how to find and use independent sources in a controversy, university managers falsely claimed that it had “no pedagogical value”.

My research article ‘The Future of Palestine’ was also attacked as another example of professional ‘misconduct’; but this claim was abandoned, as was the half-baked suggestion that my harsh criticism of Israel was “racial hate speech”. In the end the case relied on my persistent refusal to follow secret orders, to modify or remove my public comments, teaching materials and research.

That is where the Federal Court of Australia played its part, endorsing the ‘right’ of university managers to give secret orders to academic colleagues, even when that infringes on their teaching, research and public comment. This constitutes a serious blow to independent academic work.

This case has wider implications, so I will add a detailed backgrounder, very soon.