HOME / WORLD / The truth about the Ankara “sofagate

The truth about the Ankara “sofagate 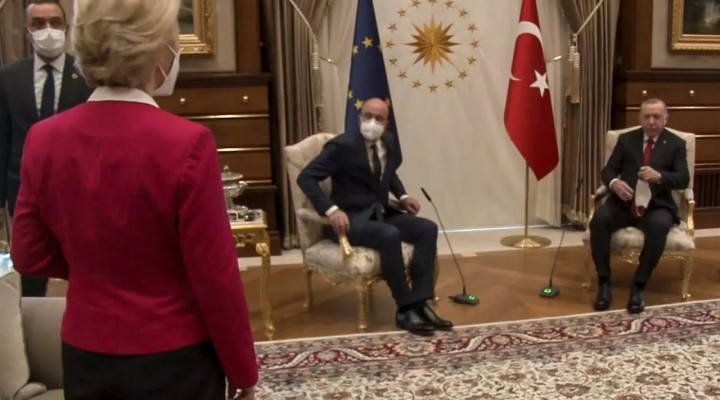 The press agencies have widely circulated images of the EU/Turkey summit in Ankara on April 6, 2021. It shows Turkish President Recep Tayyip Erdoğan receiving European Council President Charles Michel and European Commission President Ursula von der Leyen. There are only two chairs for three. Mrs von der Leyen, after standing for a while, sits down on a sofa.

The European media interpreted these images as an insult addressed by the Turkish autocrat to the European Union. Some saw it as a confirmation of his machismo. But this is absolutely wrong and masks a serious problem within the EU.

The meeting should have taken place in Brussels and President Erdoğan went out of his way to ensure that it was held at home, in Ankara. It was prepared telephonically by the protocol services of both parties. The layout of the courtroom was in line with the EU requirements. It was not President Erdoğan who wanted to humiliate Ursula von der Leyen.

To understand what happened, it is necessary to place the event in the context of the evolution of the EU institutions. 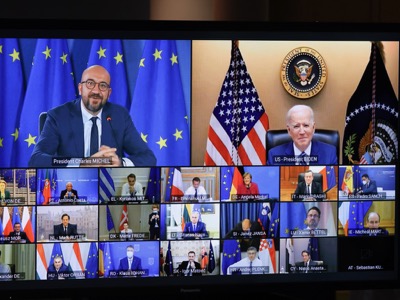 Council of European Heads of State and Government (March 25, 2021).

On March 25th, thirteen days before the Ankara meeting, the Council of European Heads of State and Government took place. Due to the Covid epidemic, the meeting was not physical, but by video conference. It brought together the 27 heads of state under the chairmanship of Charles Michel, plus their real leader: US President Joe Biden [1]. The latter confirmed in no uncertain terms that Washington needed a strong European Union at its command. He gave several instructions, notably to maintain good relations with Turkey despite the various current disputes (border demarcation in the Eastern Mediterranean; military occupation of Cyprus, Iraq and Syria; violation of the UN embargo in Libya; religious interference in Europe).

Certainly, President Trump intended to replace US imperial relations with commercial relations. He had challenged both Nato and the European Union. He had put the Europeans face to face with their responsibilities. But the attempt to return the United States to the world organisation inherited from the Second World War has not been opposed. All European leaders find it more comfortable to place their defence under the “American umbrella” and to pay the price.

The European Union was built in several stages.

Initially, in 1949, the United States and the United Kingdom placed the whole of Western Europe in an unequal alliance, Nato. They wanted to govern the area of influence they had negotiated with the Soviet Union. Subsequently, in 1957, they encouraged six Nato member states (including one militarily occupied by them) to conclude the Treaty of Rome, which formed the European Economic Community, the forerunner of the European Union. This new body was to structure a common market by imposing trade standards set by NATO. This is why the EEC was organised around two powers: a bureaucracy, the Commission, responsible for translating the Anglo-Saxon standards of NATO into local law, and a Council of Heads of State and Government responsible for implementing these decisions in their own countries. All of this is supervised by a Parliamentary Assembly composed of delegates from national parliaments.

Since this Cold War mechanism was designed against the USSR, its purpose was called into question when the latter disappeared in 1991. After many twists and turns, Washington imposed a new architecture: before the Council of West European Heads of State and Government, Secretary of State James Baker announced that NATO and the EEC, renamed the European Union, would accept all the former Warsaw Pact states, except Russia. The institutions, conceived for 6 member states, had to be reformed to be practiced by 28 or more.

When President Trump decided to disengage his country from its imperial obligations, some European officials imagined transforming the European Union into an independent and sovereign superpower, on the model of the United States, at the expense of the member states. They censored Italy’s budget and put Hungary and Poland on trial. But they met too much resistance and failed to turn the Commission into a superstate. The return of the US sponsor with President Biden offers a glimpse of a new institutional outcome: the Commission would continue to translate the ever-increasing number of Nato norms into European law and the Council would continue to implement them in national law, but given the number of its member states, an executive function should be given to its President (now Charles Michel).

Until now, the Presidents of the Commission and the Council have been equals. While the Commission President was the head of a huge bureaucracy, the Council President was a small character, just responsible for setting the agenda and recording decisions. However, neither of them was elected, but a civil servant. Both had the same status in terms of protocol.

So Charles Michel told his colleague Recep Tayyip Erdoğan that he aspired to become the Union’s super-head of state, while Commission President Ursula von der Leyen would only be his super-’Prime Minister’. Prime Minister’. 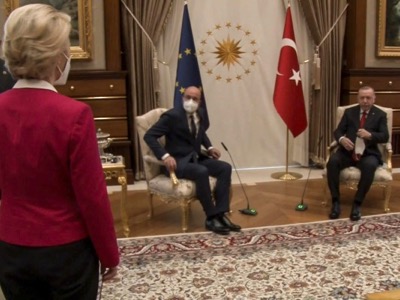 Charles Michel clings to his chair as Ursula von der Leyen protests with a faint “hmmm! “.

It was Charles Michel and him alone who caused the “protocol incident” in Ankara. President Erdoğan was only too happy to do him this favour because he divided the European Unionists in the process. If you watch the videos carefully, you will see that Charles Michel walks up the steps of the White Palace without waiting for Ursula von der Leyen, then rushes to the available chair and hangs on to it instead of making way for Ms von der Leyen or leaving the room with her if they are not brought another chair. If you read his statement after the interview, you will see that he does not even mention the incident [2]. If you look at the Turkish videos of the same incident, you will see that the sofa on which the Commission President sits is opposite another one where the Turkish Foreign Minister, Mevlüt Çavuşoğlu, sits, as instructed by the European Protocol. Indeed, there is no longer a Prime Minister in Turkey since the regime has become presidential. Mr Çavuşoğlu therefore legitimately sits opposite the European “Prime Minister”.

This is not a diplomatic incident, but an attempt by Charles Michel to arrogate power to himself within the Union to the detriment of the latter. The battle has only just begun.

0 thoughts on “The truth about the Ankara “sofagate”