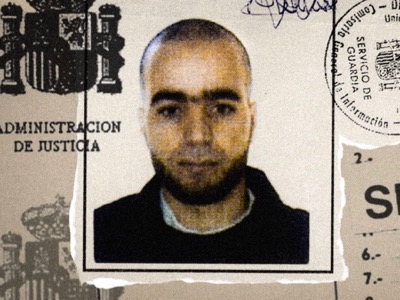 The recent revelations about the attacks which took place in Barcelona and Cambrils in 2017 – like those concerning the previous attack in Madrid in 2004 – pose exactly the same legitimate questions as those formulated in other countries about other attacks. Why, everywhere, do the Islamist terrorists appear to be linked to NATO?

n 15 July 2019, under the signature of Carlos Enrique Bayo, the Spanish republican daily Público published the beginning of a four-part enquiry into the relations between the ring-leader of the 2017 attacks in Catalonia and the Spanish secret services [1].

In Spain, espionage and counter-espionage are handled by a single institution, the CNI (Centro Nacional de Inteligencia – National Intelligence Centre). Although, administratively speaking, it is subordinate to the Ministry of Defence, its director enjoys the formal rank of Minister.

The documents published by Público attest that, contrary to the official version, the Imam of Ripoll, the Moroccan Abdelbaki Es-Satty

had been radicalised for a long time ;

that he had been recruited as an informer by the Intelligence services ;

that the Intelligence services had falsified his legal case files in order to avoid him being expelled after he was found guilty of drug-trafficking ;

that a « dead letter box » had been prepared for him so that he could communicate with his handling officer ;

and that the telephones of his accomplices were tapped.

Above all, they attest that :

the CNI followed the terrorists step by step ;

knew the locations of the targets for the attack ;

and were continuing their surveillance at least four days before the crimes were committed.

Why did the CNI not prevent the attacks ?
Why did it hide what it knew?
Why, in 2008, (that is to say before the recruitment of Abdelbaki Es-Satty as an informer), did it hide certain elements from the Guardia Civil in order to protect the enquiry into the Madrid attack of 11 March 2004 (known as « 11-M »)?

In fact, Es-Satty was already implicated in « Operation Jackal », which linked him to the attacks in Casablanca on 16 May 2003 [2] as well as another in Iraq against the Italian forces [3].

These revelations remind us of the events of 11-M, the most gigantic attack to hit Europe after 11 September 2001. 11-M killed close to 200, and left 2,000 people wounded. Although the perpetrators of this operation have been judged, we still do not know who ordered it.

It so happens that most of the perpetrators were police informants ;

NATO ran a secret exercise in Madrid on the eve of the attack, whose scenario was the same as that of the attack itself [4] – a scenario that the terrorists could not have known, even though they followed its plan ;

A large CIA team left Spain in haste on the day after the attack [5].

The attack was first blamed on the Basque independentists of ETA, then later on Islamists.

We published an investigation by Mathieu Miquel on this subject, in which he demonstrated the solidity of the hypothesis of a NATO false-flag operation [6].

Involuntarily, this was confirmed by the decidedly Atlantist ex-Prime Minister Jose-Maria Aznar. At the beginning of the « Arab Spring », he revealed that the head of Al-Qaïda in Libya, Aldelhakim Belhaj, was implicated in the attack of 11-M, but that it had not been possible to arrest and try him [7]. However, with the help of NATO, Belhaj became the military governor of Tripoli. Then, according to the Spanish monarchist daily ABC, he « moved to Syria to “assist” the revolution ». In truth, however, he went to create the Free Syrian Army on behalf of France [8]. According to the Russian ambassador for the Security Council, Vitali Tchourkine, Belhaj and his men had been transported from Libya to Turkey by the UNO under cover of humanitarian aid for the refugees. Following a request addressed to Interpol by the Attorney General of Egypt, Hichem Baraket, Belhaj became the Emir of Daesh for the Maghreb in 2015 [9]. Today, he governs Eastern Libya with the military support of Turkey and Qatar and the political support of the UN.

Let’s take another look at the attacks in Catalonia. According to the documents published by Público, the Imam of Ripoll, Abdelbaki Es-Satty, has long been radicalised, a fact which the CNI has always denied until now. He was a militant with Ansar al-Islam, a group which progressively infiltrated the Islamic State in Iraq, which in turn became Daesh.

Ansar el-Islam was led by the Kurd Mullah Krekar, who is currently under house arrest in Norway. According to the Turkish Kurd daily Özgür Gündem (today shut down by orders of President Erdogan), the CIA organised a secret meeting in Amman (Jordan) to plan the conquest of Iraq by Daesh [11]. The daily published the record of this meeting, which had been drawn up by the Turkish secret services and then stolen by the PKK. It appears that Mullah Krekar, still officially under arrest, had participated in the meeting. He had flown down from Norway in a special NATO plane, and then quietly went back to prison.

This affair created an uproar in Spain, where the Parliament of Catalonia created a committee of enquiry on the attacks, in which the Junts per Catalunya (Carles Puigdemont’s independentist party) hurled questions at Pedro Sánchez’s government in the Congress of Deputies.

The Catalonian independentists hinted that the Spanish government had deliberately allowed the attack against the Catalonian people to go ahead. This was no doubt a clever move politically, but in truth it is no more than slanderous conjecture.

The facts remain – and we are staying with the facts – that in these attacks in Spain, as in a great number of Islamist attacks in the West and the Arab world:

the terrorists were linked to NATO.

Of course, all this may be no more than pure coincidence, but since 2001 the events have been reproduced every time, whatever the location and the identity of the protagonists.